Three days ago, the first clash of Russian and German arms at the border town of Stallupönen in East Prussia marked the beginning of Germany’s war on the Eastern Front. Though outnumbered five to one, an unexpected German victory resulted in a war of nerves between General Maximilian von Prittwitz, who wants to remain on the defensive, and General Hermann von François, who dislikes remaining passive in the face of an enemy as helpful and unimaginative as his Russian counterparts.

Today, the Battle of Gumbinnen — situated less than 20 miles west of Stallupönen — will be Germany’s first defeat in the new war, and a near rout, resulting in Prittwitz’s sacking. It is also a demonstration of why the Russian Imperial Army will suffer higher rates of combat loss than any of the Tsar’s allies. Today’s battle has effects far beyond the range of their guns. 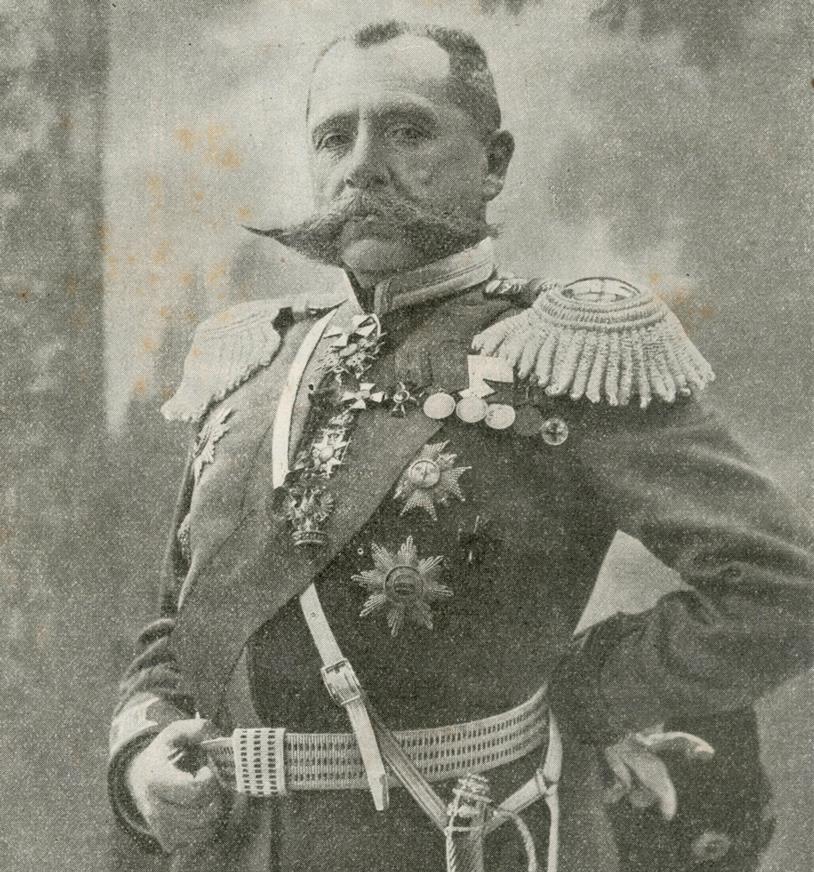 Russian artillery and machine gun crews are very well-trained, but they lack ammunition for days of sustained battle. By the end of the day today at Gumbinnen, they have fired 800,000 rounds, and Rennenkampf will await resupply and reinforcement rather than exploit his success by pursuing the Germans immediately. This tantalizing missed opportunity is the reason why wargame enthusiasts and war nerds love these early battles, which are collectively known as the First Masurian Lakes campaign. But it isn’t clear how Rennenkampf was supposed to make such fantasies come to life without any bullets.

Within months, those supply issues will become humiliatingly obvious when troops are sent to the front without any weapons at all, and instructed instead to pick up those of the fallen. Food rations are particularly short, for the Russian juggernaut depends on a poor road system and insufficient railroads.

Meanwhile, the panic in Germany has begun with Prittwitz falling back when his center collapses today, but it will extend into middle Prussia. There, plans to meet Russian invasion by damming rivers and inundating farmlands are briefly considered, but rejected because they will only make the refugee problem worse: tens of thousands of German families are leaving East Prussia for fear of the rapine and destruction that the Russians have already visited on Eastern Galicia. Along with the retreating army that Prittwitz has ordered to form a new defensive line, they run headlong into reinforcements headed the other way, resulting in a chaotic forty-eight hour traffic jam. 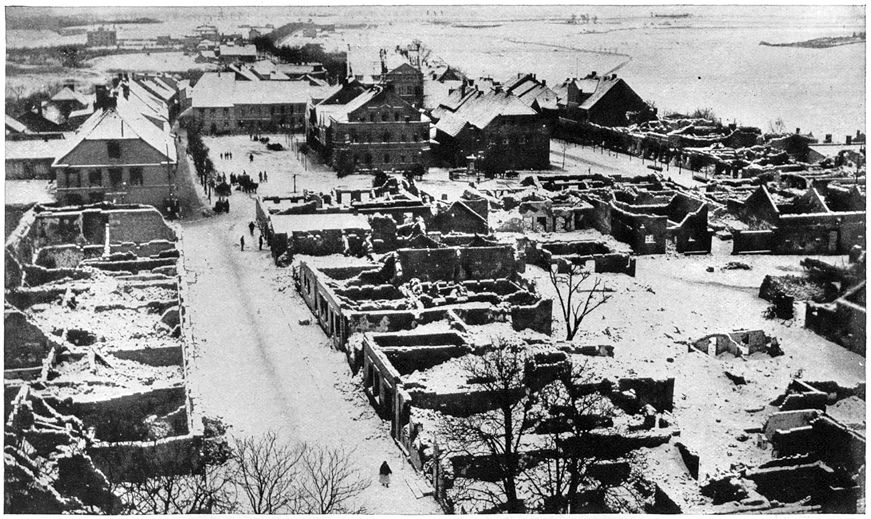 Devastation from the war in East Prussia

In Berlin, the General Staff reacts by calling Erich von Ludendorff away from his successful offensive in Belgium to the Eastern front. Helmuth von Moltke also recalls Paul von Hindenburg to active duty, but the most significant change he makes will affect the Schlieffen Plan: two corps on their way to France for the great northern flanking movement are instead dispatched to the east, helping render the planned encirclement of Paris too difficult for exhausted German regiments to execute and opening a gap in their lines.

In a very real way, the Western front is created today on the Eastern Front. The dire possibility of a two-front war, which drove Moltke to distraction at the outbreak of hostilities, now becomes a fact on the ground that will drive him into a nervous breakdown.

Though it is often forgotten, the Russian campaign against the Central Powers is larger, bloodier, and much worse for humanity in many ways than the Western Front. Perhaps because the trenches in France and Belgium have a certain romantic appeal to us in the west, the trenches in Poland have largely been relegated to a lesser, more ghastly status. Indeed, the fighting in the east is savage, and winters prove particularly awful for soldier and civilian.

Famine looms, for the men have turned away from farming to fighting. Everyone knew that the Great War would be bloody, but very few understood how long it would last. Germany has planned for a short, victorious war of movement in the west, with a mere holding action in the east until they have knocked France out of the war. Austria has planned rapid, simultaneous offensives against Russia in the north and Serbia in the south. Neither England nor France expects a war lasting longer than a year. Everyone plans to win quickly, yet nobody does.

And in a very real way, all of these timetables for mobilization and victory are driven by the very urgent fact that large portions of the combatants’ citizenry are still living on farms, and the industrialization of agriculture has not arrived on the scale that will allow the levels of urbanization we take for granted in the 21st Century. The men who march to war are needed back soon to plant and reap. 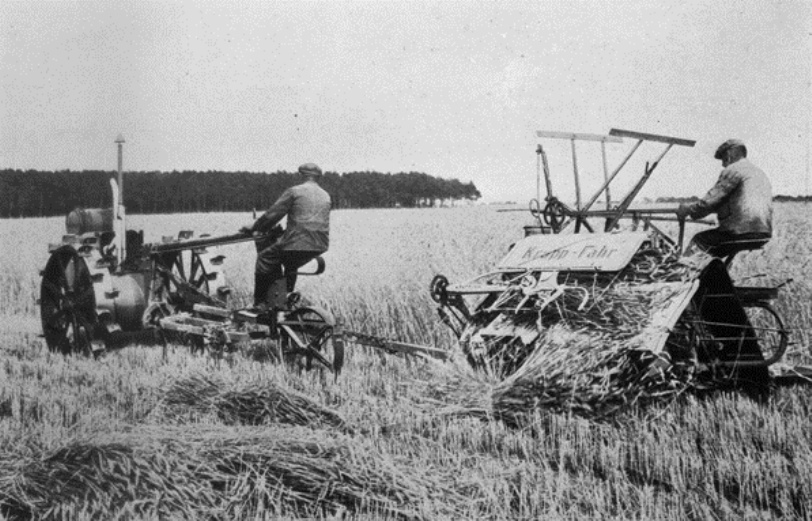 Dated ca. 1910. The German farmer’s transition to labor-saving machinery was uneven and far from complete

Because it does not end quickly, the war interrupts the annual migration of up to a million migratory farmworkers from Russian Poland to the breadbasket of Germany, which is also dependent on Chilean nitrates and foreign feedstocks that will be cut off by the British blockade. East Prussian industry and farm modernization has been slowed by its ruling class, who are suspicious of the social movements that accompany them. Food prices are dramatically higher everywhere in Europe than they were just a month ago, and now they are highest in Germany right here.

In short order, food insecurity will become a problem for all sides in the conflict, but for Germany, which imports a quarter of its grain, dairy products, and eggs, the shadow of famine starts to grow upon the land today. The state is slow to respond, clumsily letting farmers game an unregulated environment of local price controls. After allowing too many pigs to eat grain for several months, the Kaiser’s bean-counters suddenly order the slaughter of nine million swine, whose manure is just as suddenly removed from the soil fertilization cycle with dire long-term effects for productivity. In the end, hunger — and not any tactical, strategic, or logistical decision made by the allies — is what breaks both nations.