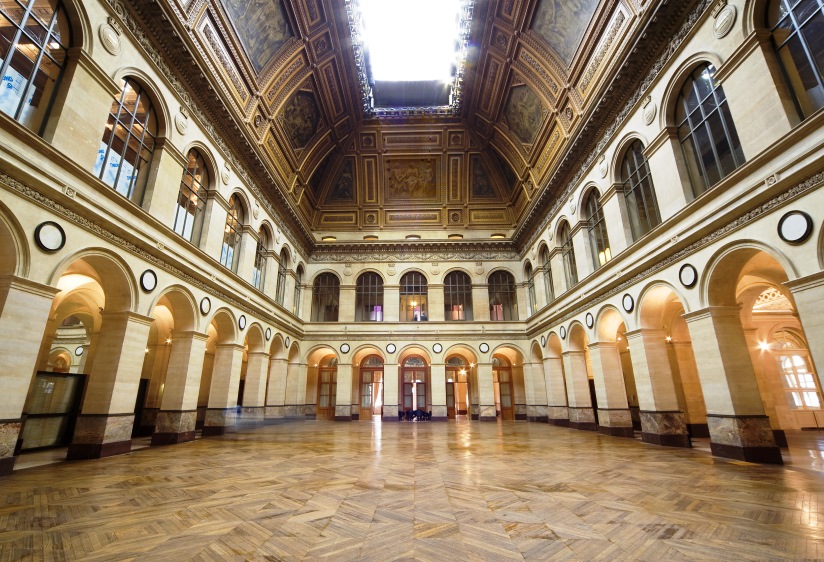 During the Belle Epoque of the 19th Century, as the city of Paris transformed from a clutter of medieval shacks into the broad avenues and grand facades of today’s glorious City of Light, Parisians also developed two very different stock markets. The Coulisse is an informal, fast-moving, liquid trading community that takes place on the street, serving the experienced investors who chase marginal profits through forward-trading. The Parquet, better known as the bourse, is a formal high-end market housed in the Palais Brogniart (see above photo of the central nave) that offers security, transparency, and guaranteed delivery. Brokers at the Paris bourse (agents de change) must be citizens of France, nominated by another broker, approved by the Minister of Finance, and appointed by decree of the President of the Republic.

The Coulisse shut down formal operations on the 27th of July, when the Austrian ultimatum to Serbia sent markets into a tailspin. But the Parquet soldiered on through the wartime credit crunch for five weeks, finally closing on September 3rd, long after markets in Cairo and Vienna and New York and London had all shut their doors to stanch the bleeding. All of Europe wanted to cash in its investments at the same moment and buy gold as a hedge against wartime inflation. Today, the Parquet reopens for business on a cash-only basis; it is the latest sign of returning confidence, for New York has reopened and the London bond markets have restarted trading.

Building on centuries of military and economic competition, London is the world’s financial center, with Paris a distant second, in the first great age of free markets. Together, the two cities account for three-fifths of the world’s international capital investments. South African mines, Eastern European railroads, Italian factories, and Middle Eastern oilfields all exist because banks in Paris and London loan the money and sell the securities in stock and bond markets. But France has suffered two years of depression after a collapse of subprime bank loans. Since they nearly destroyed the economy, these same bankers have used the central Banque de France to improve their own liquidity rather than increase the flow of credit to their consumers. This policy failure has been compounded by the weeks of panic when much of Paris fled a potential German siege; they are back, but unemployment is high and business is at a standstill.

The Belle Epoque of worldwide Parisian financial power thus seems to be ending in crisis at the very moment that France needs her banks more than ever before. 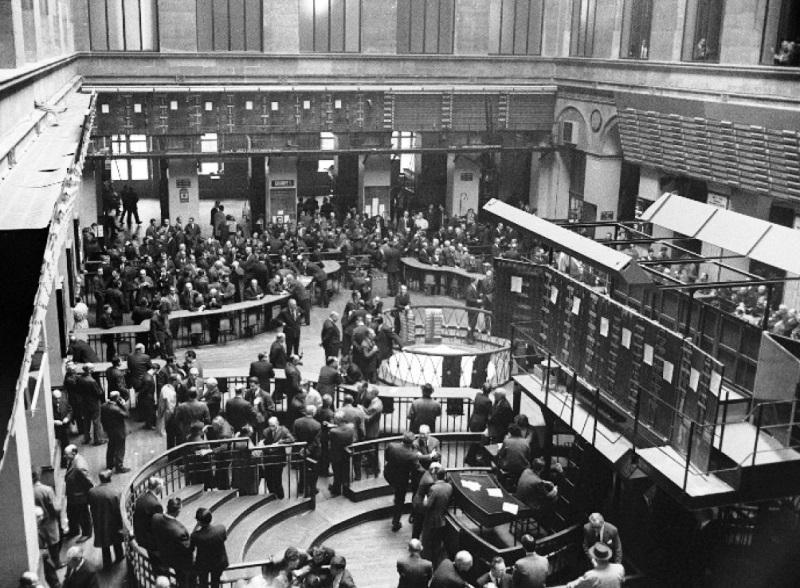 Technologically, the trading floor of the Paris Bourse did not change much between 1914 and 1973, when this photo was taken

To pay for the war, France has so far relied on a combination of direct loans from her central bank and bons de la défense nationale — short-term, wartime notes which were the only investments that skittish buyers would buy in the early days of the war. Although the French people are returning to a new kind of normal (réprise des affaires), the conflict has settled into a long stalemate while many of the country’s skilled laborers are dead, wounded, or serving in uniform. Much of France’s steel industry is now behind enemy lines in the occupied northern provinces.

For the people of France, especially the women now taking up the industrial slack and spending their new wages, it is an opportunity to forget the war by indulging in a personal financial freedom they have never enjoyed before. To policy-makers, it is clear that normal, peacetime methods of promoting investment will not be enough, and that the nation’s balance of trade will suffer if the French consumer is not restrained; the necessary importation of war material must take priority in the nation’s foreign accounts. Only centralized state control can meet this challenge of broken free markets. Without mass participation in the war effort — a full socialization of the conflict at every level of the French nation’s economy — victory is impossible.

France is hardly alone in this respect. The new British parliament is already fixing commodity prices and passing protectionist laws, bringing the first era of free trade to a dramatic and sudden end. Russia is already an autocracy, so the transition might not seem very difficult, but because the Tsar’s regime has already killed state vodka revenues in a misguided bid for the blessings of heaven, Nicholas II will need to borrow heavily to finance his nation’s war effort. Suffering the British blockade of her maritime traffic, Germany will go farther towards complete state control and self-sufficiency than any other European combatant, with mixed results.

The war has also crossed over into neutral financial markets. Responding to the blockade, the Kaiser’s bankers have been attacking the values of sterling notes, francs, rubles, and dollars wherever they can for months. Three-fourths of France’s steel blast furnaces are in the hands of the Imperial German Army, which will export much of this infrastructure home for the war effort. The German name for this financial-industrial-material fight, Materialschlacht, remains a key term for academics discussing the age of total war. 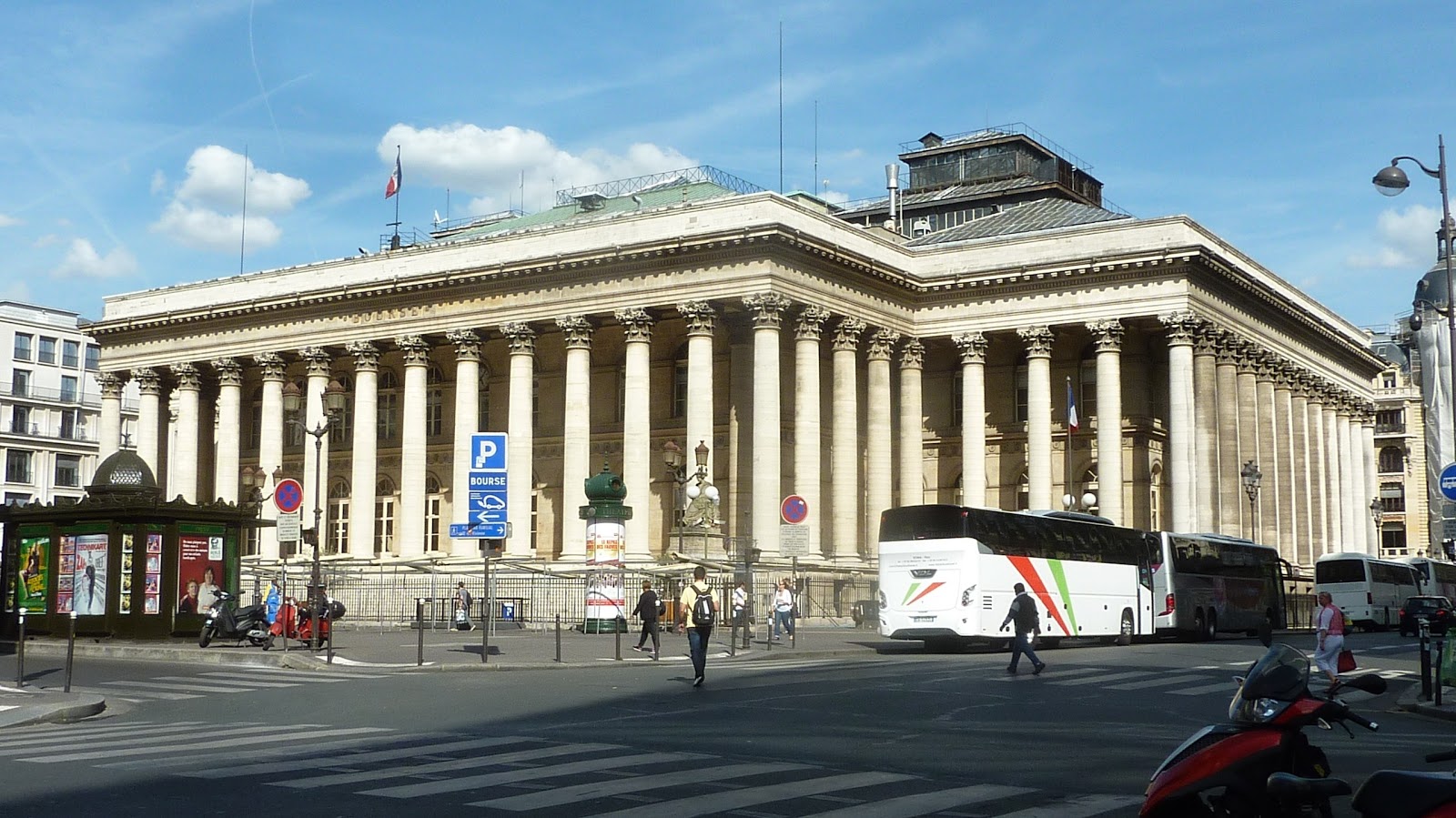 The exterior of the Paris Bourse has hardly changed since 1905, when the colonnaded wings were added

Despite sudden shortages of coal, iron, and sugar, France experiences a third of the inflation in Germany and just three-fifths of the price shock in Britain by 1916. The Ministry of Finance issues paper currency, which is readily accepted by the population. Banks encourage consumers to use checks rather than cash, and encourage businesses to accept them in commercial transactions, such as freight.

These measures require legislation to add confidence and clarity to the business and consumer markets. In time, some of the formerly-hoarded gold and silver returns to the financial system, but the rentiers of the financial class never drop their opposition to income taxes. Instead, France will wage Materialschlacht mainly through borrowing, transitioning from a creditor nation to a debtor nation in the course of the war. Even as the Banque de France becomes the biggest gold hoarder in the nation, the ratio of loans to deposits grows higher than the conservative limits imposed by the London or New York bankers.

The bourse will rally throughout the war, even during the bloodiest days of Verdun. Only the Bolshevik Revolution, which threatens default on Russian debt held in Paris, creates a significant downturn for any economic sector, but this still does not derail France. Issues of longer-term war debt will be snapped up by British, American, and Italian investors. France will in turn finance Serbian, Montenegrin, Italian, and Romanian alliances. The Belle Epoque may be over, but the ‘new normal’ is a time of innovation and flourishing investment. 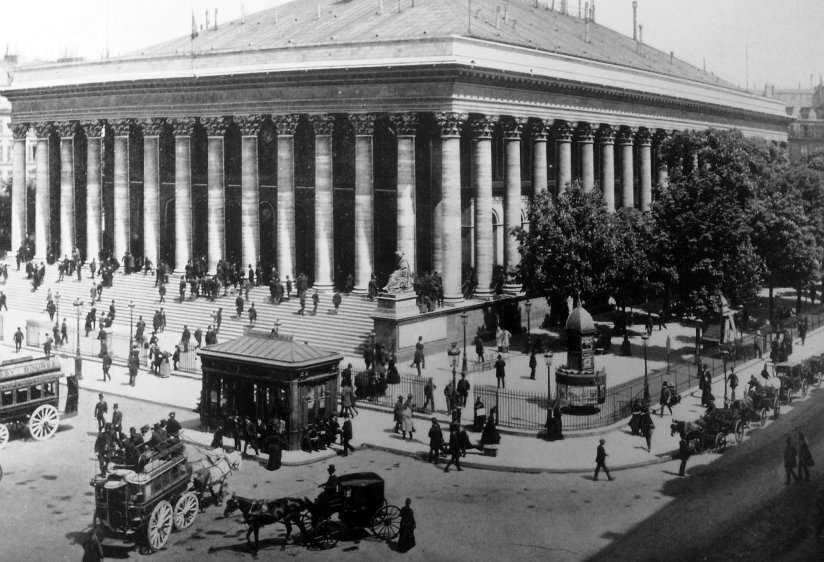 The Bourse in 1892. Note how the newsstand and playbill post have not moved in 122 years