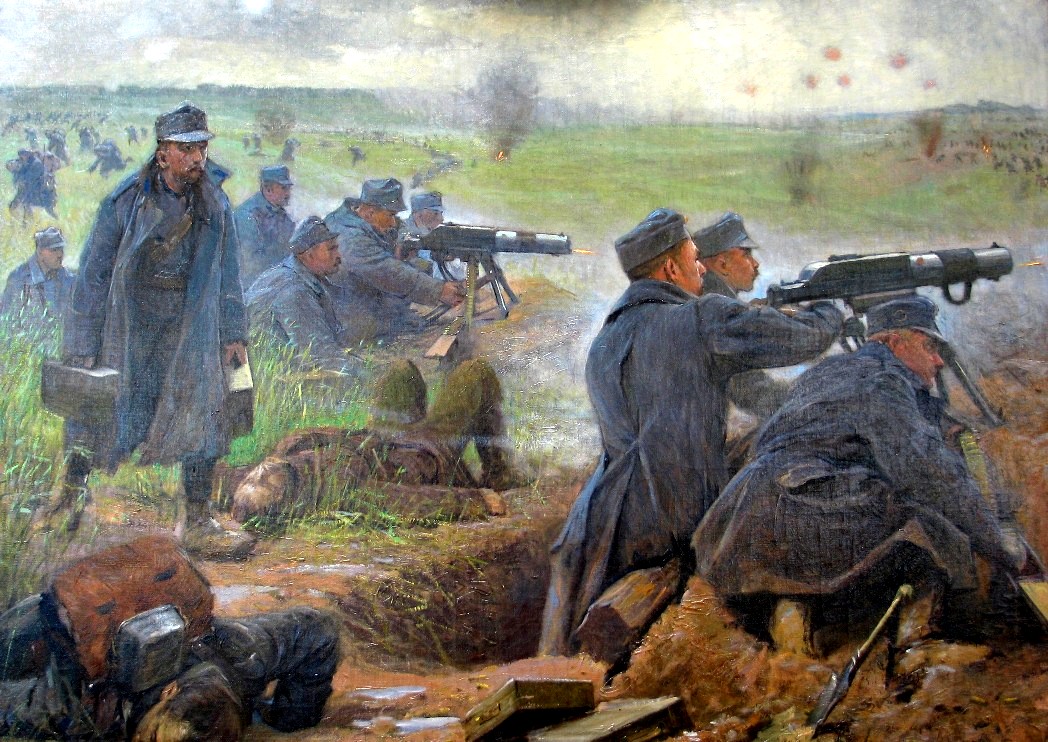 Above: a painting by Austrian war artist Karl Friedrich Gsur that depicts fighting on the Eastern front.

As the Hapsburg Empire’s troops march to disaster in Serbia and fighting continues on the Western front near the Swiss border, the first elements of the Russian Army approach the little town of Sokal in Eastern Galicia. Lying on the banks of the shallow Bug River below the point where it marks the limits of Russian and Hapsburg dominion in Poland, Sokal is the terminus of a rail line to Krakow — and a natural first strategic objective for the Russian steamroller.

Now part of Ukraine, Eastern Galicia is perhaps the poorest part of the Empire, but also the region that its Hungarian half naturally sees as worth defending, for it stands between their own kingdom and the oncoming Russian horde. Thirty of the 49 Hapsburg divisions have mobilized to attack Russia preemptively, but today 700,000 Russians encounter and defeat a force of 300,000 Austrians that has marched out from Lviv. It is the first of many disasters to come for both sides.

Tsar Nicholas II has intervened for Serbia, which shares Russia’s Eastern Orthodox religion. Indeed, until the end of his reign he will constantly frame the conflict as a divine calling, and there are many reasons to call this offensive a faith-based one. Moral force was expected to carry the day regardless of material shortages: Russia has more soldiers than rifles, and ammunition manufacture is woefully inadequate to the task of filling their magazines. Though they can field the world’s biggest army, the Tsar’s General Staff (Stavka) are woefully incompetent at the basic logistics of feeding, arming, and training that force.

Tsar Nicholas II uses a religious icon to inspire the troops. Failed offensives left Russian peasant-soldiers disillusioned about the power of faith — or their emperor — to deliver victory or protect them in battle

Despite problems of their own, the Central Powers will provide the Russians with a steep learning curve. The Austro-Hungarian Army is nowhere near as large, and hardly better-equipped, but Austrian commanders are determined to hold back the Russians at any cost, and so they do. Both the Russian and Hapsburg armies are terribly inefficient, crawling over the terrain in a back-and-forth series of movements that feature poor planning and heavy casualties, with objectives constantly taken and retaken at great cost. These losses begin to affect the unity of the multilingual army as minority units begin to prove unreliable in battle. Historian John Keegan addresses this controversy in his comprehensive book on the war:

The readiness of some Slav contingents, particularly Czech and Austrian Serb, to surrender at will was widely reported and the collapse of the Austrian army at the end of 1918 was taken to confirm the truth of Allied propaganda about the intrinsically unstable nature of the empire. There were post-war revisions, arguing that desertions were the exception and that the army as a whole had remained remarkably Kaisertreu; with reason, for no Austrian defeat can be attributed to large-scale disloyalty…the Germans were always dependable, if some never wholly enthusiastic; the Hungarians, non-Slavs and privileged co-equals, remained reliable until defeat stared them in the face at the end; the Catholic Croats had a long record of loyalty to the empire, which many of them maintained; the Poles, hating the Russians, distrusting the Germans and enjoying large electoral and social privileges under the Hapsburgs, were Kaisertreu; the Bosnian Muslims, sequestered in special semi-sepoy regiments, were dependable; the Italians and the rest of the Slavs, particularly the Czechs and Serbs, lost the enthusiasm of mobilization quickly. Once war ceased to be a brief adventure the army became for them “a prison of the nations,” with the ubiquitous German superiors acting as gaolers.

These frustrations help explain why both sides commit atrocities. Towns and villages burn, suspected saboteurs and agents die by the batch, and Russian troops engage in pogroms against nearly a million local Jews. Sokal’s ancient Jewish community is murdered or scattered today when Russian soldiers overrun the town and destroy the synagogue. 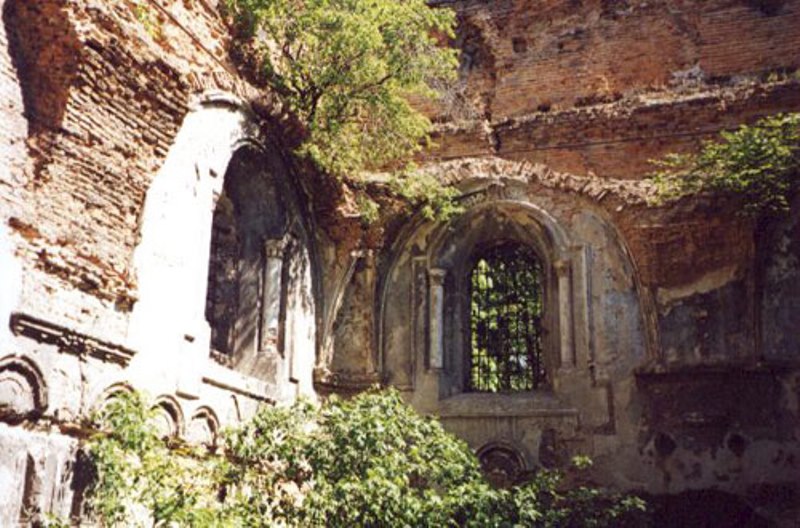 The ruins of Sokal’s synagogue today. Photo via Daniel Abraham

Even though Jewish units march in the Tsar’s army, religious prejudice is rampant in its ranks, and officers are unprepared for the civil administration of occupied populations. Poor soil quality and devastated farms produce starvation and malnutrition that kill many more noncombatants in Galicia; refugees flee in all directions. When this region becomes a contested zone again in 1939, the habitual destruction of local people, especially the Jews, is renewed. The sluggish Hapsburg rail lines used for moving men and material to battle in 1914 are re-used by much more efficient officers a quarter-century later for the systematic, industrialized slaughter that becomes synonymous with the Nazi regime. 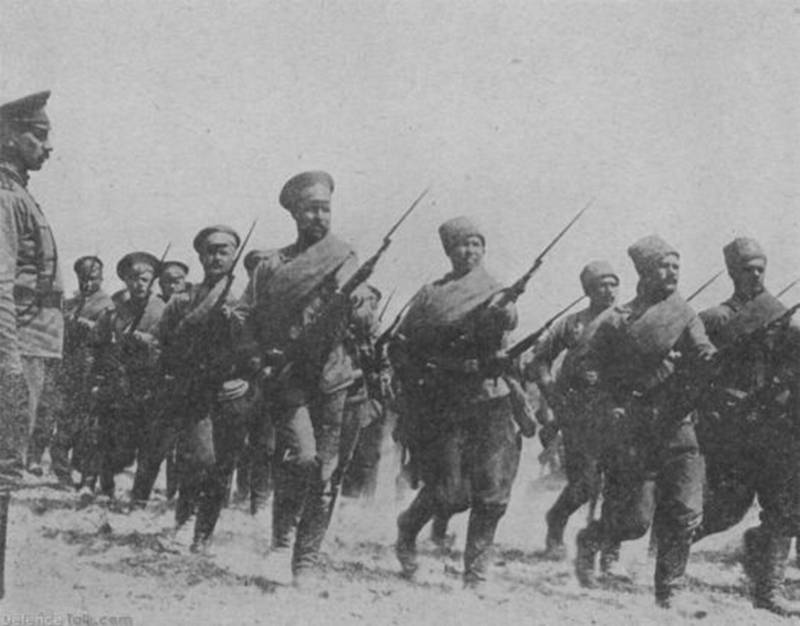 Russian bayonet training would turn out to be particularly useless

In part, the huge casualty numbers on the Eastern front are a result of tactical discipline that is appropriate to a completely different era. Trained to attack shoulder-to-shoulder, men bunch together as their formations come under fire; units often move without securing their flanks; reconnaissance is non-existent. Artillery crews are rarely able to put indirect fire on approaching enemies because there are no spotters to correct them. Communications must pass by semaphore signal or messenger, making it very difficult for commanders to coordinate their armies over great distances. Like the Western front, the Eastern one soon settles down from a war of movement into a static war of attrition in part because of the difficulties inherent in commanding so many men over such a large area.

Russia has decided on simultaneous offensives against the Hapsburgs in the South and the Germans in the North. While these plans look fantastic on paper, they prove very difficult to accomplish, especially when rivalry and infighting prevent effective coordination. Austrians and Germans have never been completely comfortable as allies, but their national commands still manage to achieve better coordination with one another than their Russian foes do between local and national commands, which often have different ideas about how to proceed. 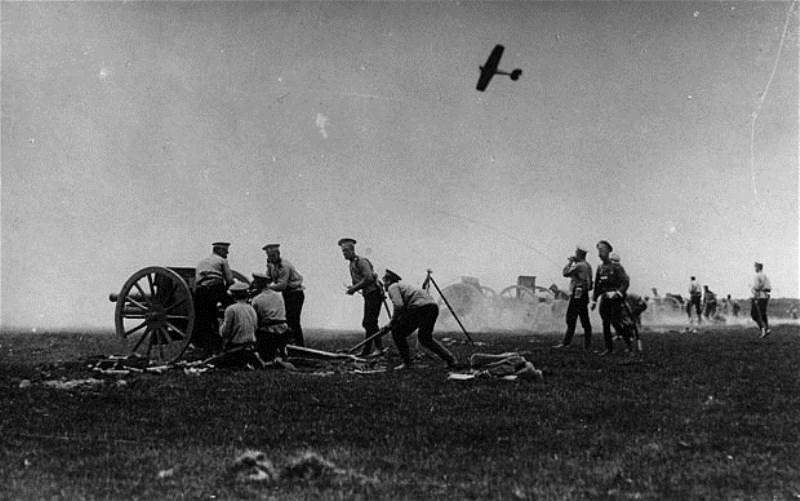 Russian gunners training with an aircraft prior to the war

Although the Galician campaigns will be some of the bloodiest in this war, they are perhaps the most exotic part of the Eastern front, and are seldom addressed by Western military histories. To be sure, Russia’s army of illiterate peasants hasn’t left us any diaries or accounts of the fighting, but Austria’s educated soldiers didn’t leave many either. Perhaps the fierce fighting and senseless destruction is simply too horrible to recollect: the Hapsburg Empire will waste more than a million men in Galicia this year alone, becoming dependent on German support because so many of Emperor Joseph’s proudest units have been annihilated or captured. For now, the Russians achieve success through sheer weight of mass, but it will not last. 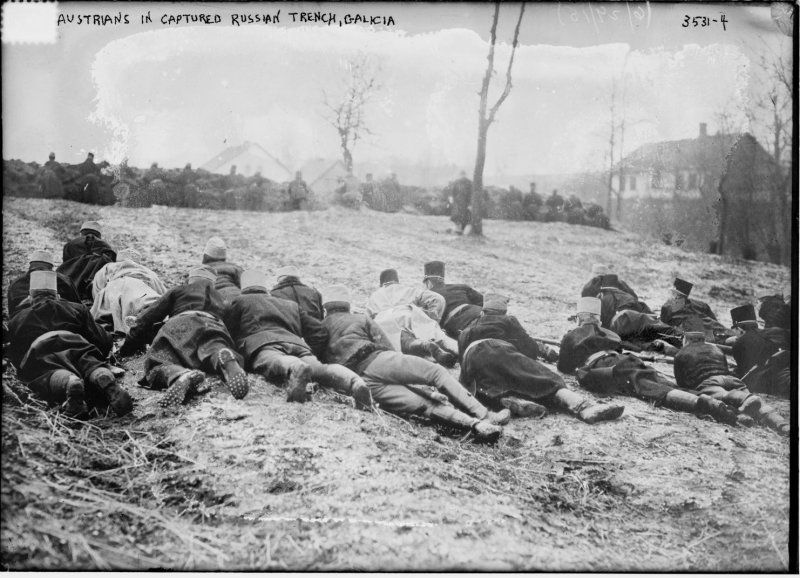 Austrian troops during the back-and-forth fighting in Galicia

Share on FacebookShare on TwitterShare on Google+
Austria-Hungary, Galicia, Russia
02 - Guns of August, 1914 - War Breaks Out
Posted on August 14, 2014