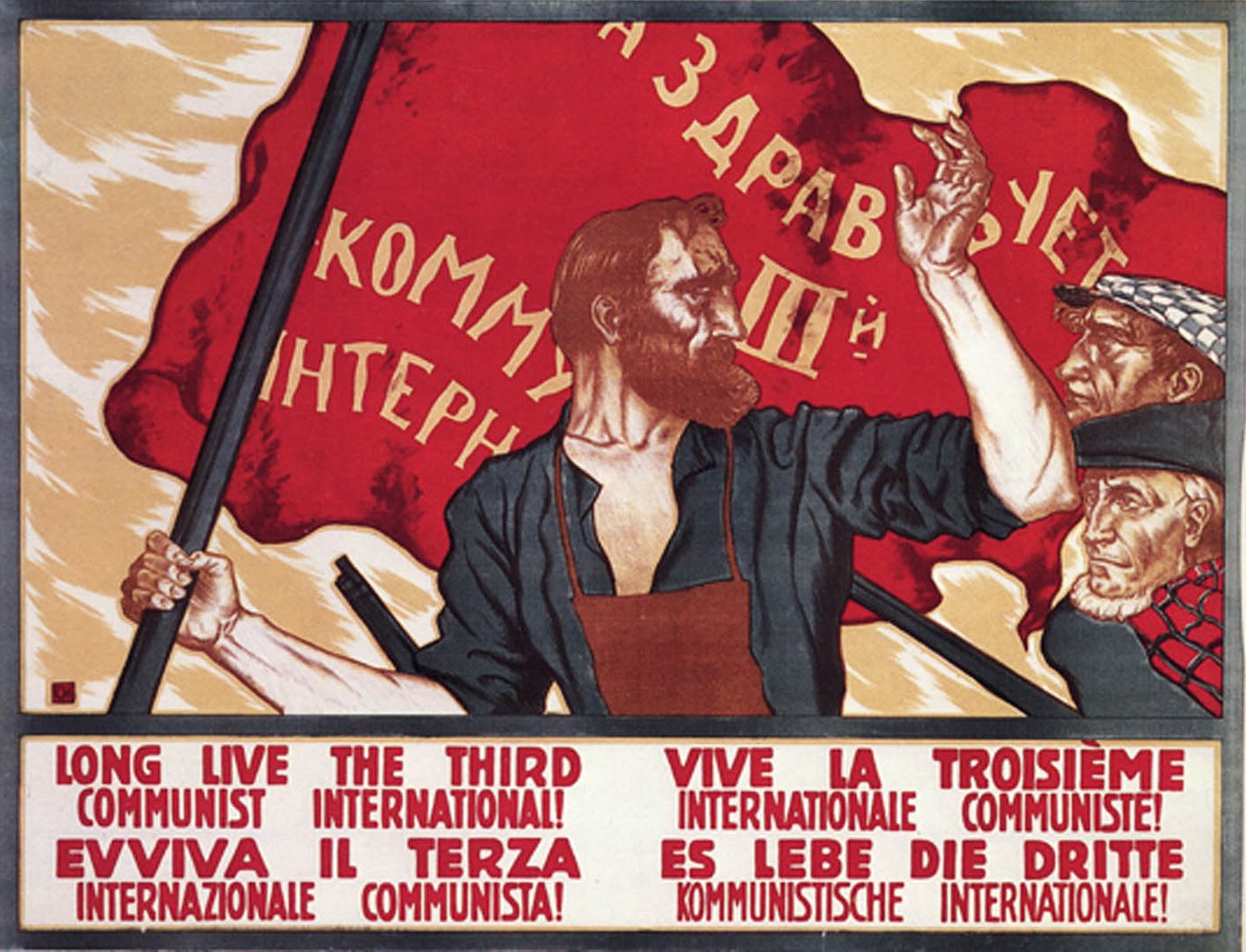 In a telegram to his wife today, Russian Tsar Nicholas II mentions the ongoing shell crisis — and the larger munitions shortfall that has rendered his army, which is ostensibly the world’s largest, incapable of knocking either Austria or Germany out of the war.

The only great and serious difficulty for our troops is that we have again an insufficiency of munitions. In consequence of this, our troops have to observe economy and discretion during action, which means that the brunt of the fighting falls upon the infantry; owing to that, the losses at once become colossal. Some of the Corps of the Line have become divisions; the brigades have shrunk into regiments, and so forth.

Reinforcements are coming in well, but half of them have no rifles, as the troops are losing masses. There is nobody to collect them on the battlefields.

Many of the underlying procurement issues can be traced back to General Vladimir Sukhomlinov, the man who has been the Chief of the General Staff (Stavka) since 1908 and Minister of War since 1909. An intellectually-hidebound cavalryman who rejected attempts to modernize training before the war, Sukhomlinov depends on his personal friendship with the Tsar for protection from the consequences of his bungling.

Lack of accountability has effects all the way down the chain of command: just yesterday, Sukhomlinov finally recommended the dismissal of General Paul von Rennenkampf for his inaction and failures in East Prussia three months ago that helped make the disaster at Tannenberg possible — never mind that Rennenkampf was held up by the slow rate of ammunition resupply. But it also reaches all along the chain of supply, for Russia lacks the industrial capacity to manufacture millions of shells, and must import them in place of the tools, machinery, and materials that allowed her agrarian economy to feed the world. By 1916, essentials like salt and matches are almost unavailable.

In June of 1915, when Sukhomlinov is finally fired by the Tsar, the global breadbasket is experiencing its first pangs of hunger in towns and cities. Along with battlefield reversals suffered by an increasingly-unhappy peasant army, Russia is becoming fertile ground for those who regard the monarchy as their implacable enemy. 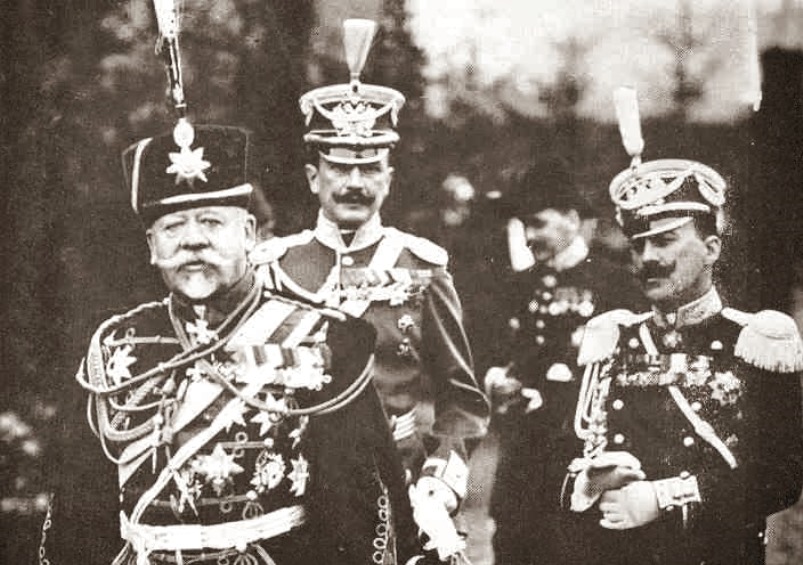 Vladimir Sukhomlinov (L) with his personal staff. A proud cavalry soldier, he was poorly-equipped to be in charge of critical war industries. His management and leadership failures left Russia vulnerable to Bolshevik activity

Leon Trotsky also arrives in France today. A correspondent for the revolutionary Ukrainian newspaper Kievskaya Mysl and the New York-based emigre paper Novy Mir, he will push the envelope of wartime press restrictions and censorship to their limits. His career has already been an adventure story: Trotsky covered the Balkan Wars, and due to his Russian origins he had to escape from Austria into Switzerland with the opening of hostilities. But Trotsky can hardly go home, for he had to escape Siberian exile for London in 1907 before doing any of that.

While he writes for liberal journals, he is in fact a longtime radical of the Russian Social Democratic Labor Party (RSDLP) whose journalism provides some cover for his activities with the international socialist movement. He has already worked with the Swiss Socialist Party, convincing them to adopt an internationalist stance against the war, and published The War and the International, a book calling for the oppressed masses to fight their rulers instead of one another. Along with fellow expatriate Vladimir Lenin, Trotsky is determined to resurrect the prewar solidarity of the global proletarian movement, oppose the war, and bring the people’s revolution to his Russian homeland.

Formed in Paris at the close of the 19th Century, the Second International has been the governing body of the worldwide worker solidarity movement until the war put the organization into utter disarray. Its national constituent organizations have broken away in support of their respective governments’ causes against one another, each reckoning that joining in the nationalistic fervor will lead to broader acceptance and a stronger political role. Lenin has excoriated the various leaders responsible for the descent into chauvinism and jingoism.

Upon reaching Paris today, Trotsky soon asserts himself with the objective of stirring opposition to the Tsar’s regime. Swooping onto the editorial board of the newspaper Nashe Slovo, he immediately pushes for a public break with RSDLP co-founder Georgi Plekhanov, who has endorsed the war effort, and calls for a new conference of antiwar socialists in Switzerland with the new year. His activities soon earn the attention of the Russian ambassador in Paris, whose efforts eventually lead to Trotsky’s expulsion to the United States in 1916. 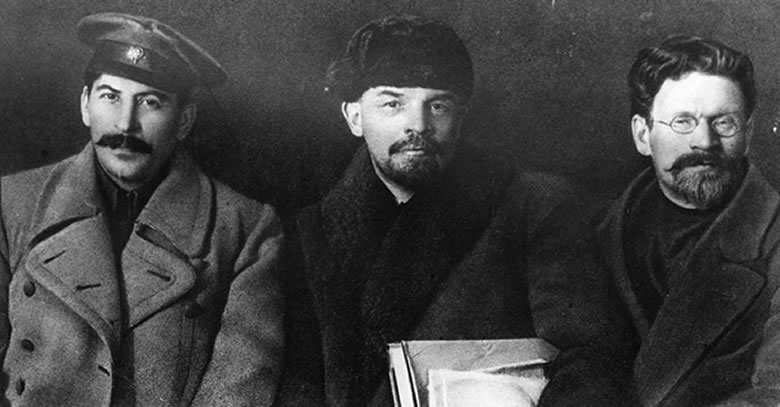 The story of the Russian Revolution in three names, L to R: Joseph Stalin, Vladimir Lenin, and Leon Trotsky

Resistance to the war effort is already organizing even within Russia. On November 2nd, a conference of Bolsheviks serving in the Duma — Russia’s toothless parliament — met at a nondescript Summer house near Petrograd (St. Petersburg) to plan and organize against the war effort. They oppose the extension of war credits, and intend to work against the War Industries Committee as well as all efforts to avert strikes and bring labor unions into the war effort. Half their membership had already been arrested for seditious activities, and on the third day of their deliberations the police arrived at the house to arrest everyone. They will be tried in February, stripped of their civil rights, and sentenced to Siberian exile.

The decline of the Tsar’s autocratic state in wartime creates a competition between Russia’s middle class (bourgeois), who try to expand into the power-vacuum through so-called “worker’s groups,” and the Bolsheviks, who manage to turn a September 1915 War Industries Committee meeting into a fiasco. Russia’s liberals have been held back for too long by an overly-centralized state — and are incapable of meeting the radical left’s conspiratorial, subversive organizing power.

During the Great War, almost all the worst wounds to Russia are self-inflicted. With vodka prohibited to the peasants and workers and soldiers, but not the bourgeois or the aristocracy, there is more than enough room for traditional Russian resentment to affect wartime production. The masses increasingly see the war as a failure of the social elite, and the center cannot hold against the fringe.

It is a time of revolutions, collapsing empires, and deteriorating monarchies. No regime is more absolute — or as hollow — as the Romanov dynasty, for they have reserved all authority unto themselves and their favorites. Meanwhile the strongest alternative to their rule happens to be the most active, dedicated, and radical socialist community in Europe. It is hardly a contest of equal opponents. 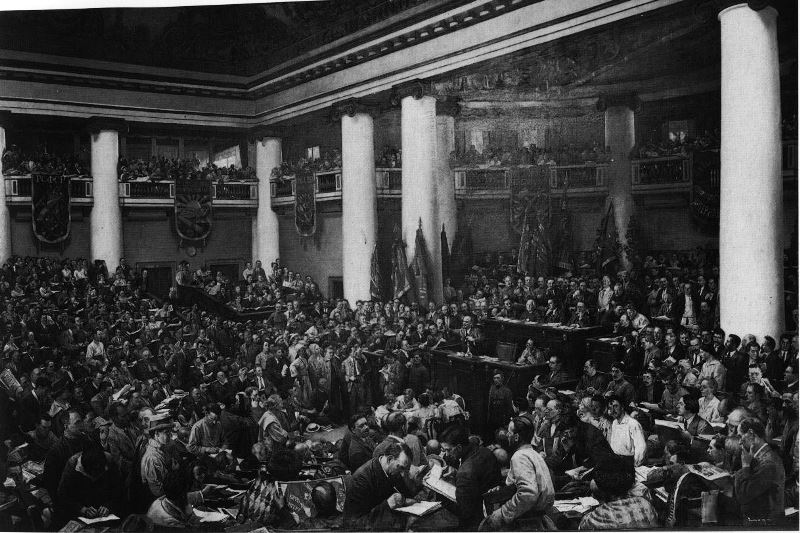 “The Ceremonial Opening of the Second Congress of the Third International” by Isaak Brodsky, whose work would become the foundation of the Soviet art movement known as ‘socialist realism’