Today, the Vaudeville Théâtre des Capucines becomes the first Parisian entertainment venue to reopen since they were all closed on the second day of August. Final performances had accompanied the country’s mobilization order, but most theatres will reopen by the end of the year. Swept up in the emergency of what was expected to be a brutal, but short war, Parisian life has slowly resettled into a new kind of normal. In three more days, the French government begins returning to Paris from Bordeaux, where it had relocated during the height of the German advance. The official return on December 10th signals that the French nation has endured the ‘grey wave’ of boche invaders.

German attacks around Ypres and the Yser have let up under heavy rains and the exhaustion of bleeding corps. The British Navy has just cleared the Indian Ocean of German cruisers, bringing some stability back to global trade. On the battlefront and the home front, these are the days when the Western world recovers from the shock of August. There are no premature declarations of victory — just a grim determination to live for the day and soldier on.

Over the next four years, the streets of Paris will fill up with soldiers of many nations and war widows clad in black. Orphans and refugees will sadden the cityscape too, but this is not a gray wash of time in Paris, a forgotten moment. The Kaiser will need much more than cannons and Zeppelins and bombs to turn out the lights in Paris. 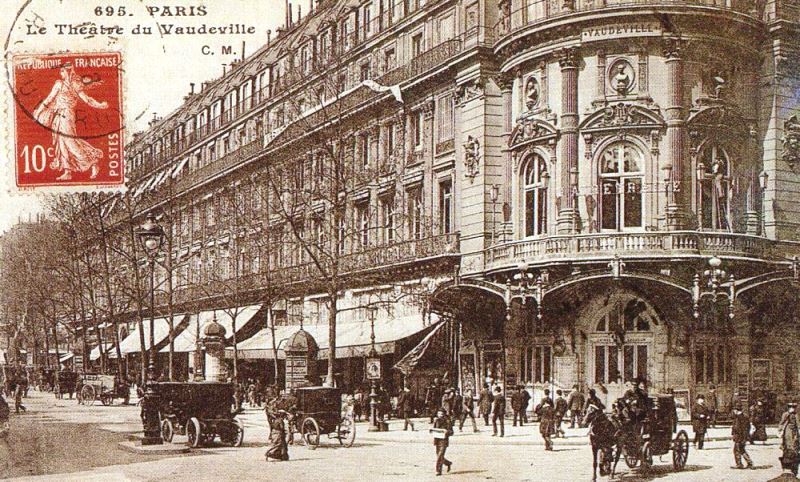 A postcard image of the Théâtre des Capucines. Wartime blackouts encouraged crime and changed the life of the city after dark

German aircraft have attacked Paris since the early days of the war, and for most of the conflict their fixed-wing aircraft are within an hour’s flight time of the city. But the bombs they carry are small and unreliable, doing little damage. Zeppelin raids will arrive in March, but even the heavier damage of larger bombs does not convince the city to dim its lights. Only a new generation of bigger planes, built to drop more powerful bombs in great waves, can convince Paris to adopt defensive measures such as lighting restrictions, shelters, and blackouts. Even then, the theatres and universities and libraries do not close and the light of Paris never dims.

At the darkest hour for France in 1917, the government of Georges Clemenceau will break ground on an entire Paris leurre, a duplicate lit exactly like the real one, which can absorb the abuse of bombs while the original sits in utter blackness. Though never completed, construction of this massive strategic deception is well underway when the theater of war drops its final curtain of fire.

Fernand Jacopozzi, the man behind the stagecraft of this false Paris, will go on to electrify the real city during the 1920s, giving it much of its modern brilliance. The lights on the Eiffel Tower are his legacy. Indeed, la tour Eiffel has played a key role in the defense of the City of Light since the beginning of the war. 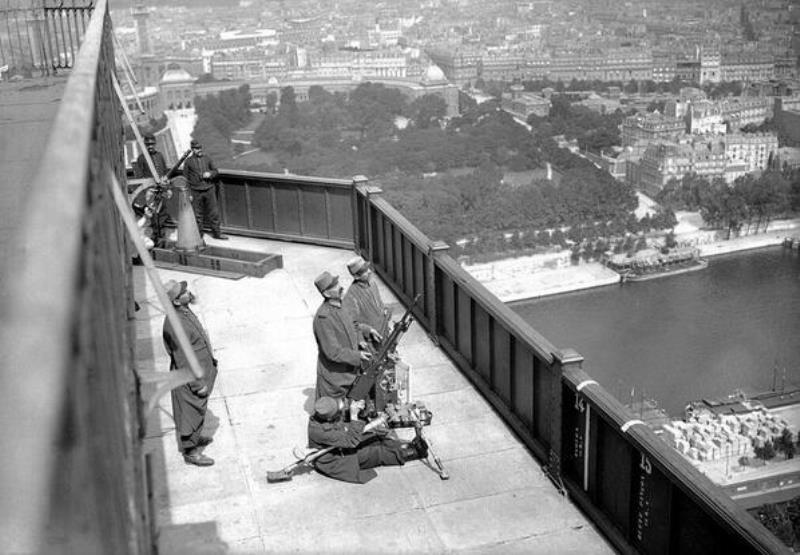 Antiaircraft guns on the Eiffel Tower in 1916

Built as the centerpiece of the 1889 Exposition Universelle, the Eiffel Tower remains the world’s tallest human-made structure in 1914. Although radio sees limited tactical use during the war, army commanders already use radio Morse code for rapid communications with their headquarters, and France has been intercepting, decoding and jamming these enemy wireless messages through antenna lines suspended from the tower. Their jamming proved particularly effective during the Battle of the Marne, and in time French SIGINT operators will score many intelligence victories, including the discovery of Mata Hari.

But the ultimate value of radio signals intelligence is measured in victories and casualty lists. SIGINT has already determined the outcome of battles, with effects measured in tens of thousands of lives, at Tannenberg, Coronel, the Cocos, and more than once on the Vistula. Wireless already had such strategic importance that France and her British ally have consistently attacked towards radio transmitters in Togoland, Kamerun, Namibia, the South Pacific, and China from the very beginning of the war. Wireless interception will prove as crucial on the Western Front as anywhere else.

In 1918, today’s small, marginal groups of French intelligence specialists have become a large bureaucracy attached to every military operation, and modern intelligence agencies are still using their basic principles of radio code breaking and message traffic analysis today. That fact is all the more remarkable when we consider that cryptography is done entirely by hand in 1914, allowing only a single, real-time pass to copy each message, for there are no recording technologies that can preserve the signals for later analysis.

One effect of this operation is that the Eiffel Tower itself achieves an acceptance that did not exist before the war. Hundreds of artists and designers had protested the steel structure as a vulgarity, and there was no guarantee that it would be left to stand after its 20-year lease expired. But the City of Light rightfully comes to regard this symbol of their industrial power as a national symbol of endurance and victory that deserves to shine bright against the darkness. 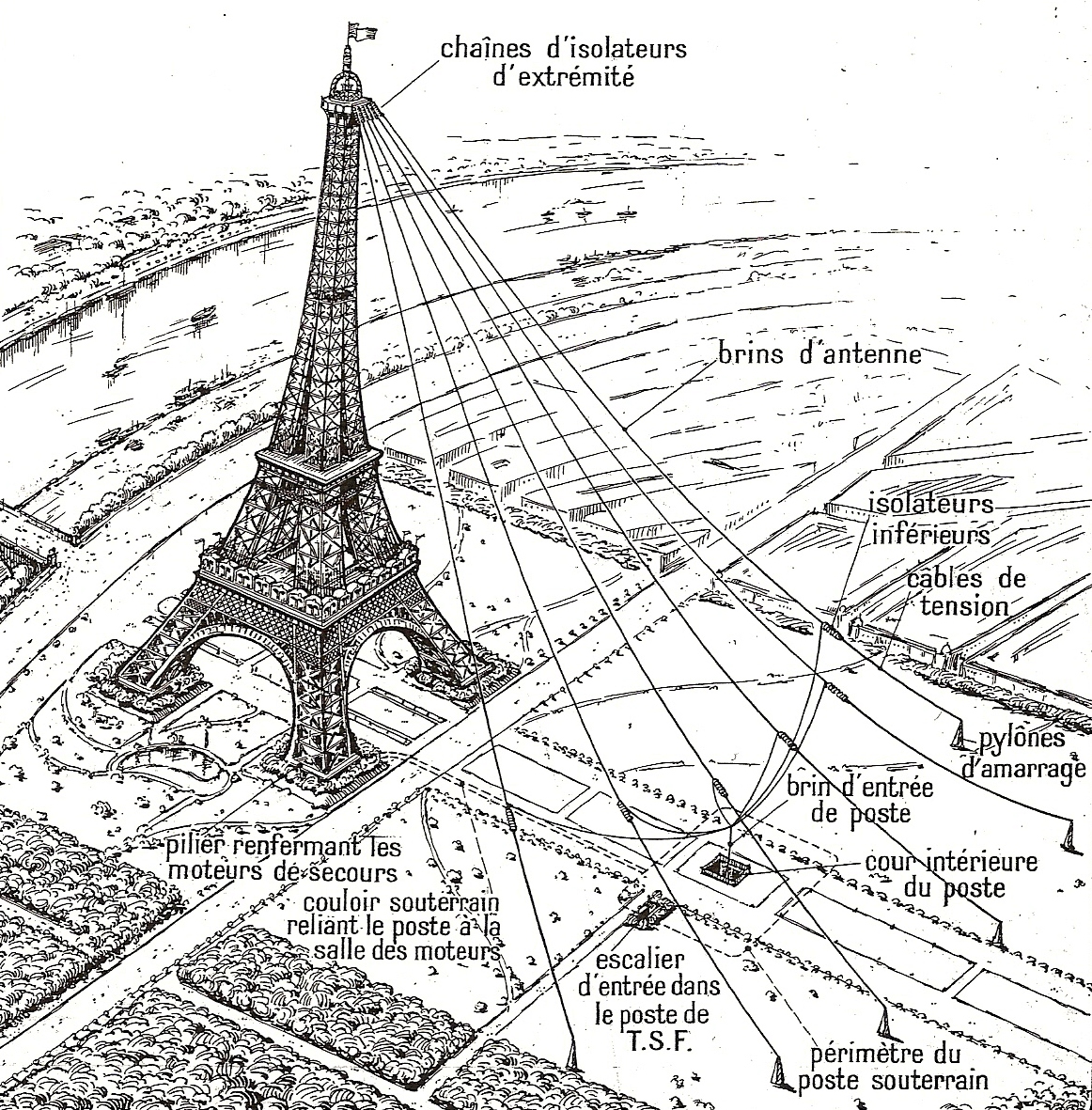 A diagram of the radio antenna depending from the Eiffel Tower showing the entrances to the underground facilities where operators and cryptologists worked, coming and going in plain view of city-dwellers