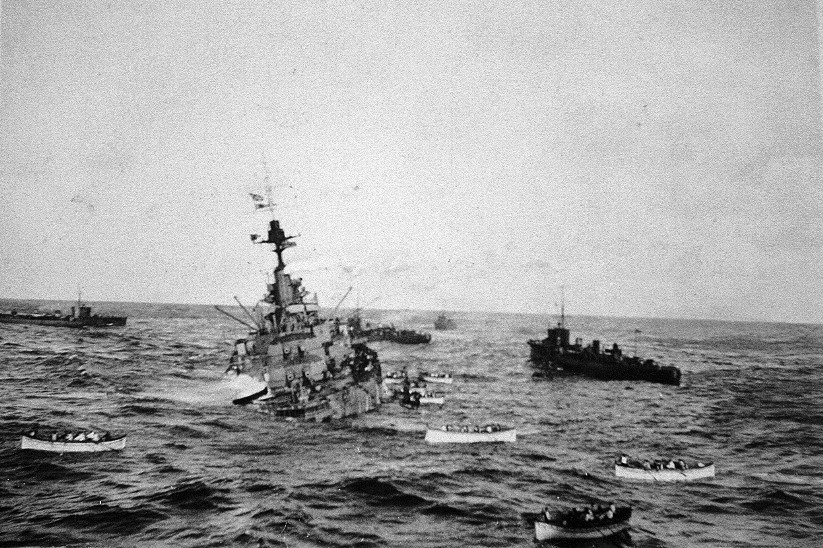 At about a quarter of an hour before nine o’clock this morning, as she turns at speed during a squadron gunnery exercise, the HMS Audacious is suddenly rocked by an explosion underneath her. She pitches upward for a moment, then strains on her landing, tearing her hull open. As compartments begin to flood, Captain Cecil Dampier assumes that his battleship has been struck by a submarine torpedo and raises the appropriate signal flag, then fights to bring his ship to shore.

He does not know it yet, but his massive, expensive battlewagon has struck a mine laid by the crew of the SMS Berlin. Dampier’s signal sends the fleet scrambling to abandon the area, however; and although Admiral Sir John Jellicoe orders every available small boat to the rescue, his capital ships stay safely clear. Only in the afternoon does Jellicoe’s staff learn that two nonmilitary vessels have struck mines in the same area in the last twenty-four hours. 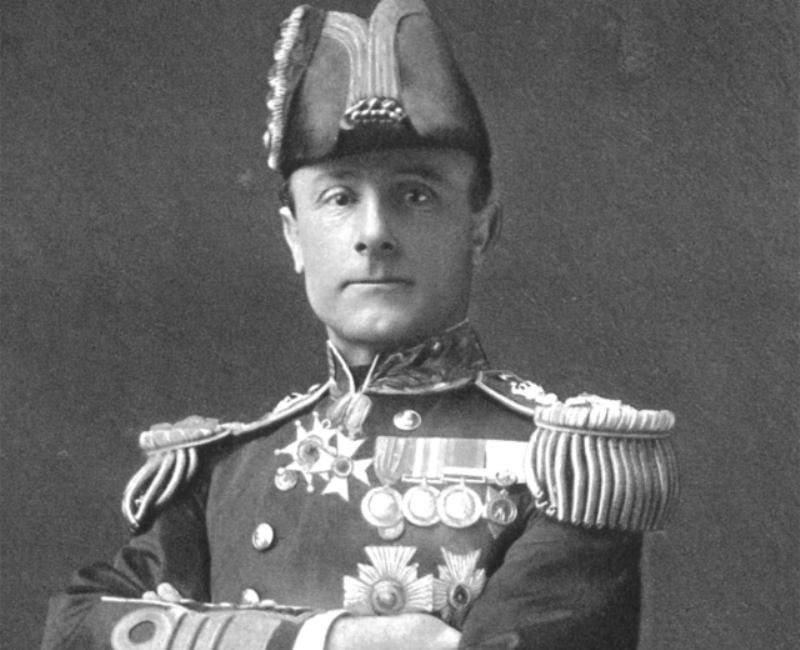 Britain had never entrusted her entire line of battle to a single admiral before Sir John Jellicoe, perhaps the most powerful single person in the history of the British navy

Although the crew of the Audacious has managed to right her list by counterflooding compartments, she is now riding low in rough seas. Using his radio, Captain Dampier tries to establish a tow line with rescuing vessels, but the North Sea refuses to cooperate with three attempts. He orders nonessential sailors off the boat, but remains on board until he is ordered to abandon ship with the rest of his crew as darkness falls.

The Audacious finally capsizes twelve hours after she was hit. A few minutes later, an explosion roars through her ammunition compartment, sending out a shower of shredded battle steel armor that kills Petty Officer William aboard the Liverpool. The sole casualty of the day is a rescuer — what we would today call a ‘first responder.’ 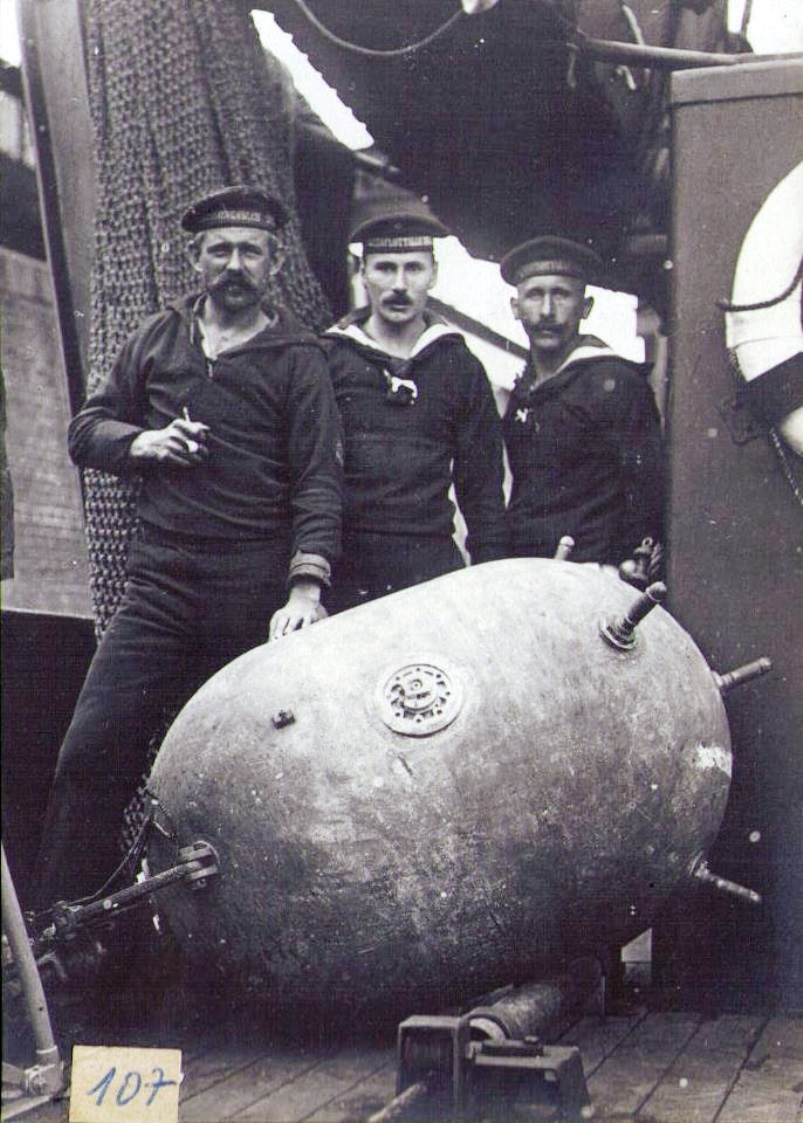 A German minelayer crew with a Hertz horn mine, so named for the protuberances on the top

The Audacious has been sunk by another proud German achievement in the chemical sciences. Made of soft metals such as lead, the ‘Hertz horn’ contains a conductive acid ampule that breaks when the tube bends, thus activating a battery charge to detonate the mine. Although naval mines have been used for decades, the Hertz horn design is the first manufactured mine that explodes reliably after striking the hull of a vessel, shattering steel with an enormous pressure wave.

Always controversial, but especially when they destroy civilian ships, naval mines were very nearly banned by the Hague Peace Conference of 1907. Although the Asquith government officially condemns the Kaiser’s navy for resorting to such indiscriminate weapons, Britain will later copy captured German mines to build their own first reliable contact mines, then lay some 235,000 of them in the allied blockade of Germany. 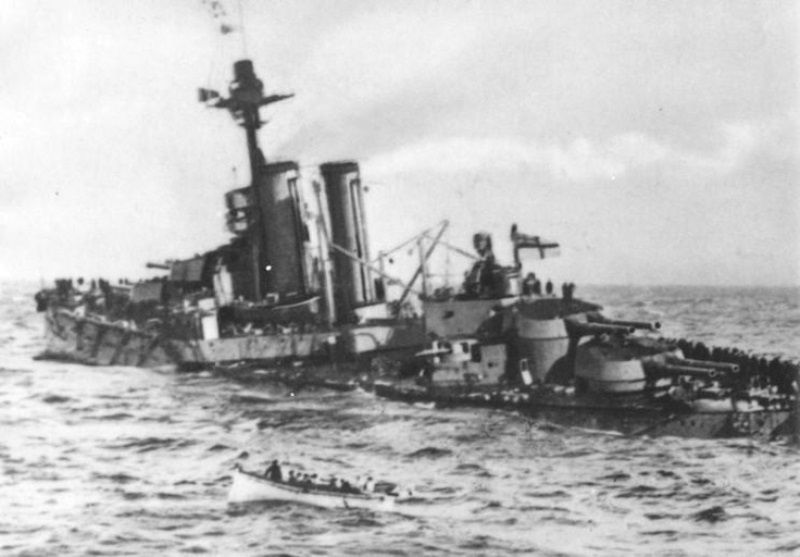 Another view of HMS Audacious as the crew abandoned ship

Costing far less than a battleship, mines are also an asymmetrical weapon. Along with submarines, they are a direct threat to Britain’s enormous investment in battleships. Anxious for the possibilities, and fearing that confirmation of the sinking will inspire the German admiralty to lay more mine barrages, Admiral Jellicoe orders the loss of the Audacious be kept a state secret.

But American passengers aboard the Olympic speak freely, and the event has been recorded in photographs and on film. By the 19th of November, the German admiralty is satisfied that reports the Audacious has been sunk by their mine are true, but the British admiralty continues to include her in all public ship lists and press reports of fleet movements. To the eternal shame of the British navy, this charade will not end until three days after the Armistice.