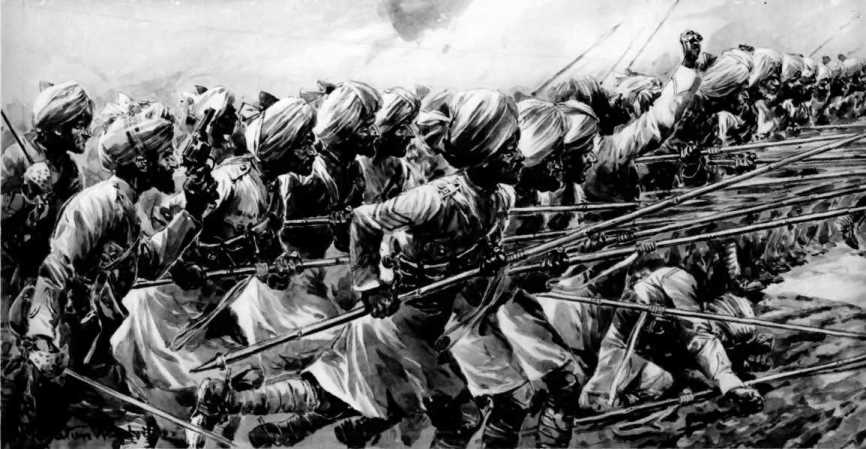 The above illustration, in which British war artist Richard Caton Woodville depicts a supposed charge by dismounted Bengal lancers at Ramscapelle on October 24, 1914, is an excellent example of a war legend born of wishful thinking and false reporting. In fact, yesterday at Hooglede, near Dikesmuide, a squadron of French cavalry did make a dismounted charge to cover another unit’s retreat while armed with lances instead of rifles. But this event was not the result of some gallant, old-world feeling: expecting their charges and close-quarters fighting to take place on horseback, every army’s cuirassiers, uhlans, and dragoons have gone to war with rifles that lack bayonet plugs.

Yet the procurement nightmares of 1914 make the confusion underlying the above illustration somewhat understandable. The Indian army has been systematically starved of resources by its native princes, and arrives in Europe dreadfully short of artillery and machine guns. As they reach the rear of British lines near La Bassee this morning, the Gurkhas and Sikh troops of the first two brigades of the Lahore Division of the Indian Expeditionary Force (IEF) also carry newly-issued rifles, for the ones they had brought 6,000 miles with them were incompatible with the modern British ammunition supply. 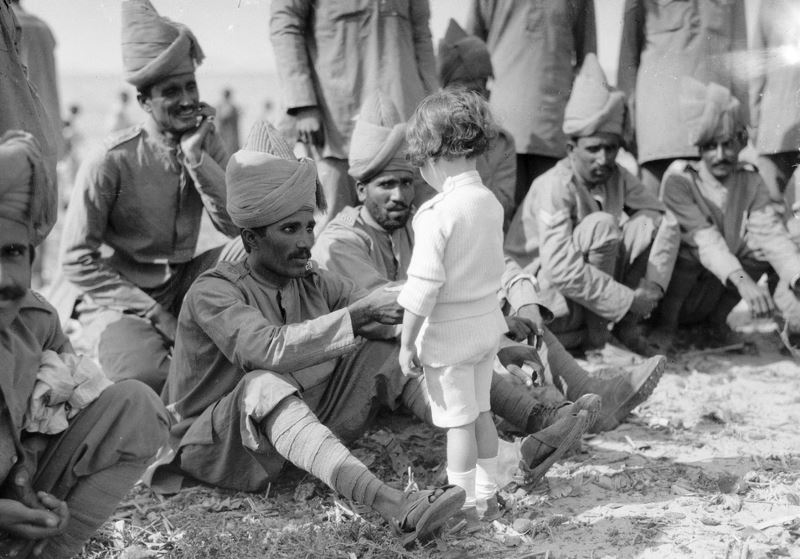 Culture shock: a French child meets Sikh troops after their disembarkation on September 30

Despite not knowing their new weapons at all, these men still take and inflict their first casualties on the 24th in relief of exhausted British troops. The fighting is savage, and the attacking Germans outnumber the defenders by a ratio of seven to one.

Many of the battalions in the IEF will be at half-strength before the end of the year; more than 1.3 million Indian subjects of the British crown will serve in the Great War as soldiers or laborers, earning battle honors and distinction with genuine acts of heroism. Yet the transition to a European battlefield is not easy, and when they arrive the IEF is even less prepared than the French cavalry in material and training terms.

For although the war’s bloodiest days are already done, and trench warfare has become a fact, there is still a learning-curve for officers, who die at alarming rates by exposing themselves to fire. This proves to be a particularly tragic problem for the men of the IEF: while the British officer corps has done a very good job of preparing to host an Indian force in Europe, the crucial cadre of men who speak their languages and know their cultures is quickly decimated by the First Battle of Ypres. This can leave them isolated within the army, makes it difficult to train and prepare them for battles, and leads to lethal misunderstandings. 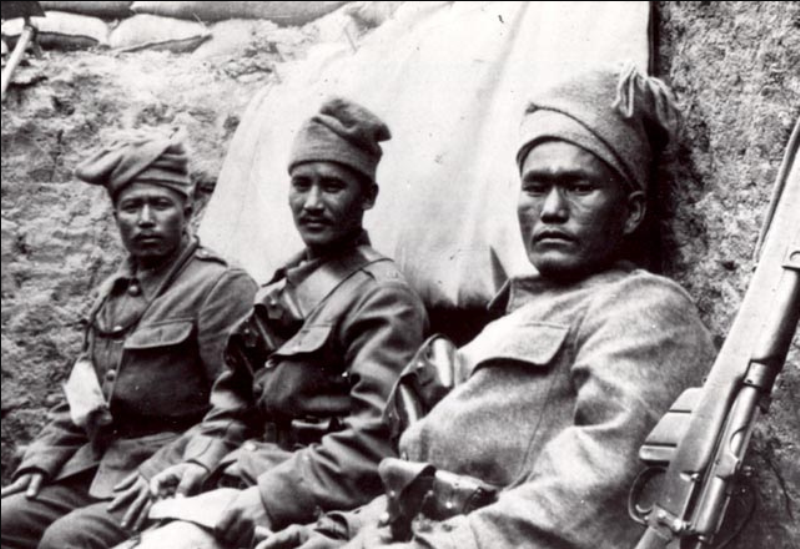 Among the most feared warriors in the world: Nepalese men of the 6th Gurkha Rifles in 1915

Considered one of the two most warlike peoples of the subcontinent, Sikhs make up just two percent of India’s population but 22 percent of its army. These units enjoy remarkable cohesion even with the loss of their officers and the tremendous casualties they suffer in some of the most infamous scenes of the Western Front. Writing home from the Battle of the Somme, Indar Singh tells his family: “It is quite impossible that I should return alive. Don’t be grieved at my death, though, for I shall die arms in hand and wearing a warrior’s clothes. This is the happiest death that anyone can die.”

Yet death is not the only stranger one can meet in the trenches. Wounded Indian troops are evacuated to England, nursed back to health in hospitals, and then returned to the front upon their recovery. This completely contradicts the Indian culture of war, in which wounded soldiers are considered to have discharged their duty and are not expected to fight again. 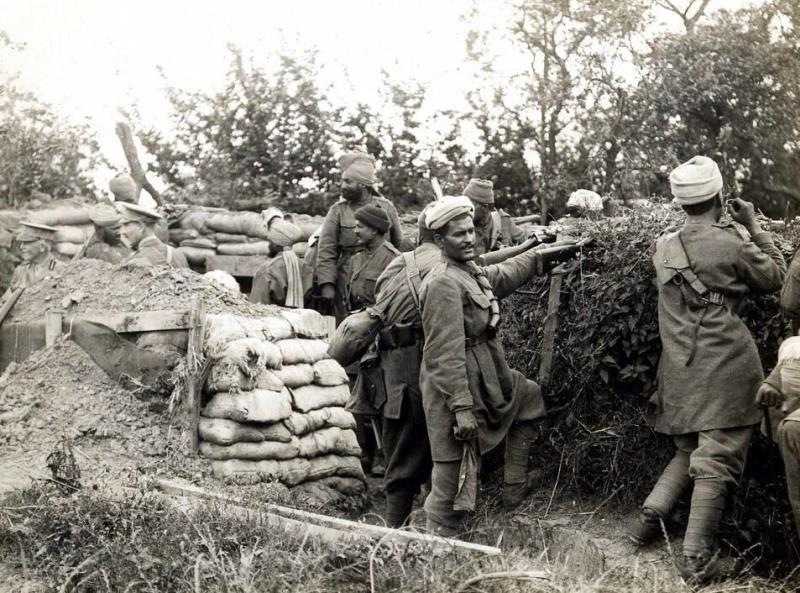 Most Indian troops will not fight in Europe. Instead, they are already serving in Egypt, Africa, and soon in Mesopotamia. Their sacrifices will expand the periphery of the empire which dominates their homeland, and along the way there are place names which cause the same shudders throughout the former British Empire even today: Gallipoli, Baghdad, Neuve Chappelle.

Yet in the long view, the Great War is a tremendous boost for nationhood in South Asia. When the war ends, India has its own representatives at the Versailles Conference alongside Canada, Australia, South Africa, and New Zealand. Although it will take decades to finally achieve their dream, the Great War will stir Indians to agitate for independence like never before. It is a great historical irony that by drawing its empire into their war, Britain sets the dissolution of her global power in motion. 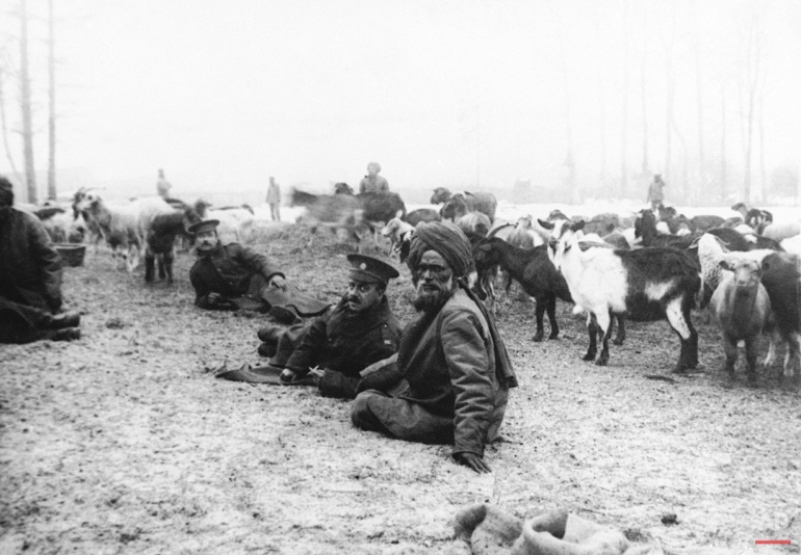 A herd of goats on the Yser River. The only meat fed to the Indian troops, these animals were brought with them from the subcontinent along with the spices and flavors of home