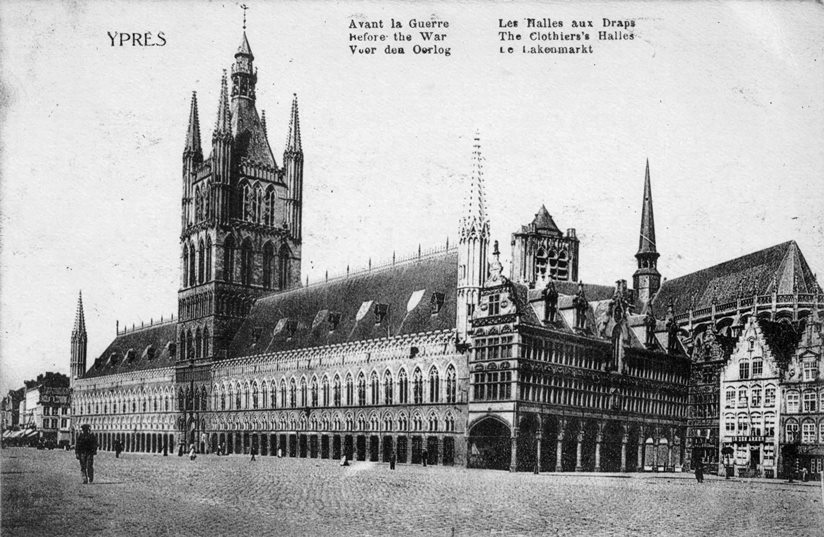 The British Expeditionary Force (BEF) has just finished redeploying from the Aisne to Flanders, and they are just in time for a fight.

Seven and a half battle-weakened divisions occupy a bulging thirty-six mile front as a German attack begins today near the Belgian city of Ypres (pronounced ee-pray). Still seeking a war of movement at the direction of their commander, the BEF fights in shallow, unjoined trenches and pits they have dug by hand, defending the gaps with rifle crossfire. Lacking enough barbed wire to create effective obstacles, they find their lines constantly being infiltrated by an enemy seven times as numerous as themselves.

It will take days of bloody fighting here before Sir John French finally gives the order to dig in deep for the long war that nobody wants, finally closing the Western Front. The men of the BEF do not know it, but Ypres will remain a battleground for the duration of the war, seeing four more major battles amid almost-daily barrages that leave the city completely destroyed — and turn this ancient, walled community into a graveyard of armies. 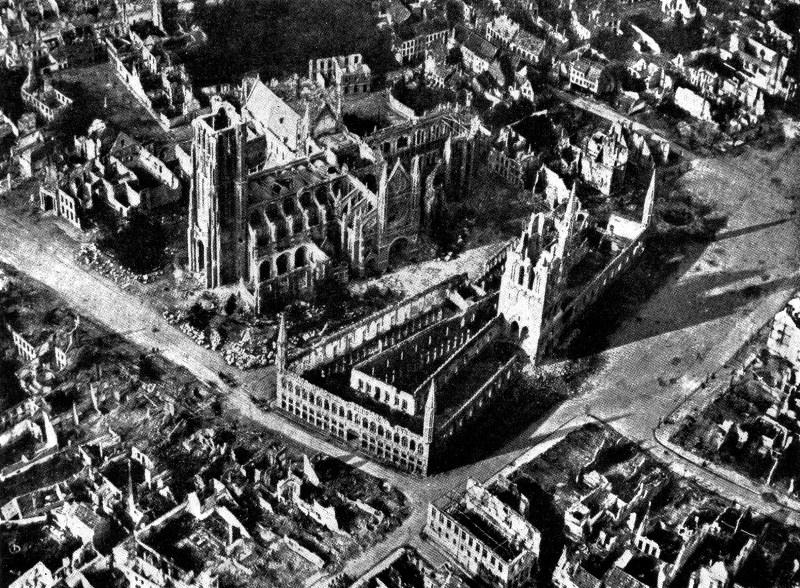 In 1915, German shellfire has destroyed all the roofs and damaged most building walls in the city center

Located between Belgian forces defending the Yser River to the north and their own II Corps defending to the south, with French troops filling the gaps, Ypres is unpronounceable to many British soldiers of 7th Division, who swiftly begin referring to their new home as ‘Wipers.’ Regardless of its name or its centuries of history, Ypres becomes an important center of BEF resistance to German attacks.

As the only geographic barrier to the Channel ports, the loss of Ypres would disrupt allied communications and supply lines with consequences all along the front. Hoping to knock Britain out of the war, and confident in holding what high ground Flanders offers, the German General Staff makes repeated, bloody attempts to break through here using every available tactical and technical innovation at their disposal. Indeed, Ypres will be the scene of the first gas attacks on the Western Front.

By the end of the war, the medieval Cloth Hall of Ypres is a total ruin. It will take 46 years to completely rebuild the city

The First Battle of Ypres finally sputters to a stop in November as it becomes clear that neither side will be able to win a breakthrough. Britain lacks heavy artillery; what field artillery tubes they do have are poorly-sited, and suffer from a severe ammunition shortage. All the prewar stocks are consumed, and manufacturing capacity has failed to ramp up fast. Limited to just six rounds a day, the British artillery cannot support attack or defense; the German artilleryman is also suffering a shell shortage, too, and unhappy with the quality of the new shells arriving from home.

With nothing to shoot at one another, and endless Winter rains soaking all remaining enthusiasm, an uneasy peace reigns over the ugly, brown fields of Flanders into 1915. When the ammunition shortage is finally resolved, the entire British sector here lies under observation, so the German artillery spotters use harassing and interdicting fires almost every day until the end of the war. Delivering mail, or food, or ammunition to the front lines soon becomes at least as dangerous as service in the trenches. 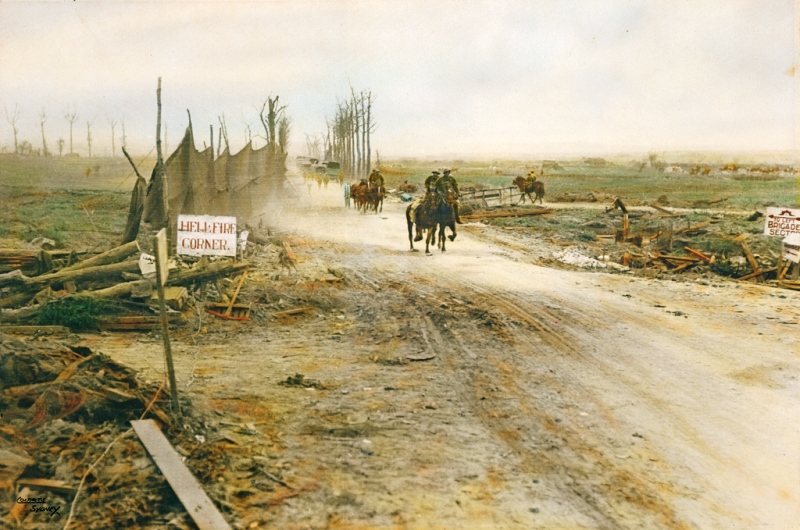 ‘Hellfire corner,’ the intersection of the Menin Road and the Ypres-Roulers railroad lying under German artillery observation. Crossed mostly at night, and only at a full gallop or top speed by day, a cloth barrier was erected to conceal transport columns. It is visible on the left in this photo

After sustaining more than 54,000 British casualties, every unit in the BEF is down to half-strength or less by the end of the battle. The Germans die in heaps here, too: more than 80,000 reservists and volunteers are killed while attacking in column, as if they are fighting at Waterloo a century ago; approximately 25,000 student volunteers who left their colleges to join the war now lie in a single mass grave at nearby Langemarck. By the end of the battle, Germans are observed attacking in the smaller formations that characterize their long war of attrition.