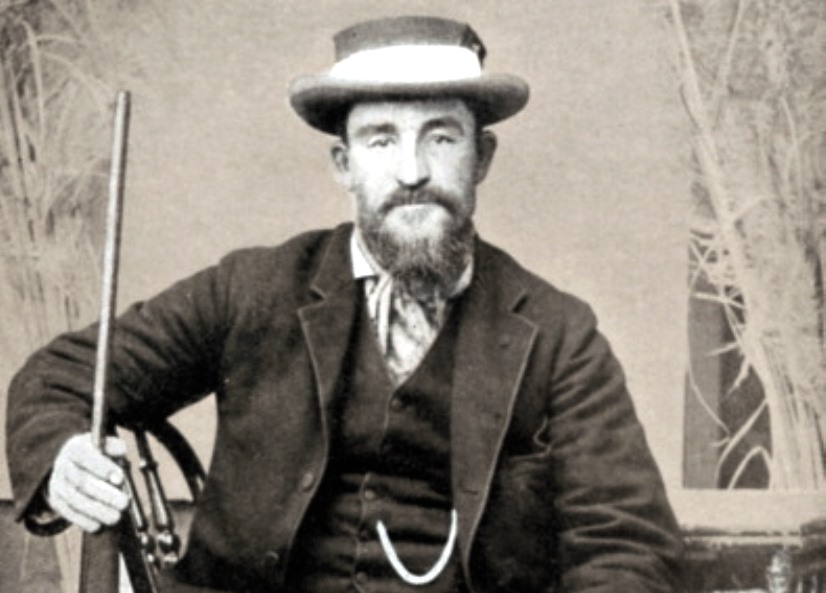 It is a time of great change and turmoil in the Western Transvaal, and General Christiaan de Wet (above) is not happy about it. Convicted of beating a native boy with a shepherd’s whip, the veteran commander of the Boer Wars has been fined five shillings by a royal magistrate, who further insulted him by smiling at the victim “as if he wanted to give him a kiss.” Denouncing the judge as a tyrant, de Wet tells anyone who will listen that the free people of the Transvaal can no longer tolerate their government — and must overthrow it by force of arms.

Violent racism is an explicit factor in the uprising. De Wet has a ready audience in the poor white bywoners of the platteland who face growing economic competition from black sharecroppers. Unlike the white men who send their daughters to earn money in factories, but who regard farm labor by their wives as a personal dishonor, black fathers are happy to put their entire families to work in the fields. South Africa’s agricultural sector, which has been capitalizing and consolidating for a decade, appreciates the efficiency these black families provide over the poor whites, but the bywoners are enraged by the loss of their social status to the ‘unwashed natives,’ who they see as less human than themselves.

Tensions are also running high one month after General de la Rey, another popular figure of the Second Boer War, was killed while running a police blockade to organize mass resignations of Afrikaner officers. Popular conspiracy theories surround the incident, especially among the landless Afrikaners and bywoners who already believe any number of lurid rumors about black men seducing white women in the cities of South Africa.

Reflecting these widespread racist narratives, Lieutenant Colonel Manie Maritz is unashamed to say that he doesn’t want “Englishmen, niggers and Jews” to rule the land. The stirrings of insurrection among demoralized whites are further fueled today when the government of Louis Botha publishes the news that Maritz, the commander of a volunteer militia force, has been secretly collaborating with the Germans — and stands in open rebellion against the Union of South Africa. 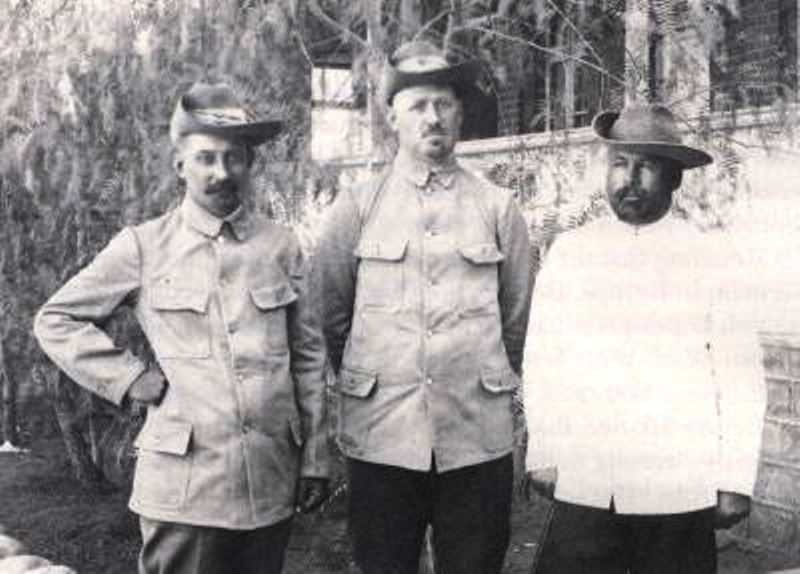 Rebel leader Manie Maritz stands at center. Commanding what we would today call a paramilitary organization, his uprising is broken on the same day that de Wet joins it

Maritz, who sullenly refused to obey orders to support an attack on German Southwest Africa seventeen days ago, has steadfastly refused to surrender his commando. Three days ago, Botha ordered General Conraad Brits to replace Maritz with Major Ben Bouwer. Arriving at Maritz’s camp the next day, Bouwer encountered Germans from Southwest Africa in the camp and was immediately arrested.

After showing him correspondence and a treaty with the German governor in Windhoek promising to send even more arms and soldiers for an invasion of South Africa, Maritz released Bouwer the next day with a message for the government: send General de Wet and four other Boer heroes to meet him here, or else he will attack. Botha’s response, delivered yesterday, is to declare martial law and order the rebellion crushed.

Units receive their orders and begin moving today. It does not take long to put down Maritz’s rebellion; General de Wet declares his own uprising on that same day. This disjointed, uncoordinated approach is one important reason why the Five Shilling Rebellion fizzles. In a future era, a clever German espionage agent would have supplied de Wet and Maritz with radios in order to communicate. Another reason for their failure is that Southwest Africa cannot realistically supply the rebellion with anything like the promised amounts of equipment or troops, while the Union has been building an army of its own for months now and enjoys endless resupply by the British empire’s unrivaled merchant fleet.

But the biggest reason the Five Shilling Rebellion fails is that they are up against another former Boer General who is intimately familiar with their tactics, as well as the terrain on which they fight. Louis Botha was their colleague in the Second Boer War; now he is their Prime Minister, and he will not endure their treason. 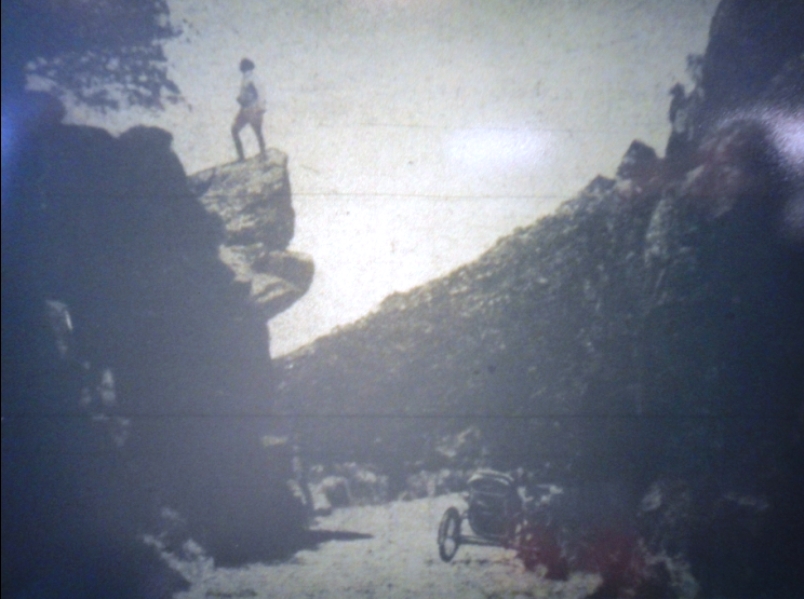 An officer surveys rebel positions. His Royal Enfield motorcycle with sidecar is visible in the road below

It takes just two more days for the first government troops to engage and rout a company of Maritz’s Boer Free Corps near Upington, taking seventy prisoners. A second engagement on the 22nd sends a wounded Maritz fleeing to German Southwest Africa in defeat. Just four days later, Botha takes personal command of more than 6,000 troops at Vereeniging to lead them against the 5,000 Boers that de Wet has rallied to his flag; using the same tactics they all once used to destroy British outposts, Botha surrounds and surprises the rebels on November 12th in Mushroom Valley.

The back of this uprising is broken in just thirty days. Mop-up operations last until January. By the Spring, Botha is once again free to invade Namibia with a force including 20,000 Boer volunteers, a number far exceeding the size of the entire Five Shilling Rebellion.

De Wet is convicted of treason and sentenced to serve five years in prison, but is released after just six months on his promise to stay out of politics. Maritz will return to South Africa in 1923 to become Adolf Hitler’s biggest fan on the Dark Continent — and a hero in defeat to modern-day neo-Nazis. 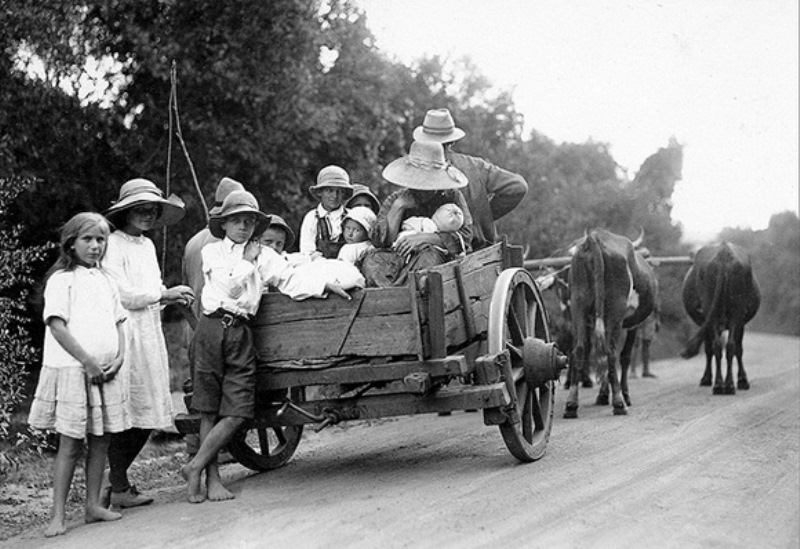 A family of bywoners, or poor white sharecroppers, photographed on their way to church. The paternalistic Dutch Calvinism of the Afrikaners affected every level of their society — and rationalized their virulent racism