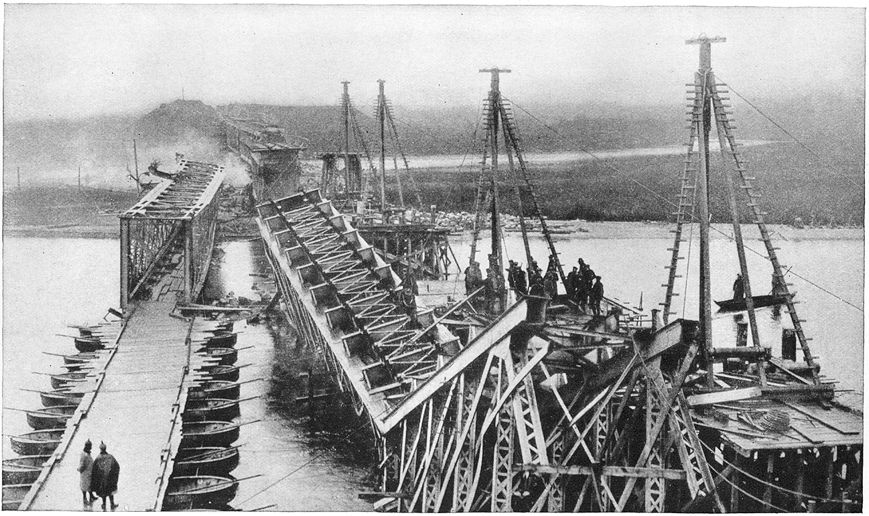 To win victories, armies must shoot, move, and communicate. Each of these words bears far more import and activity than one might imagine, and the above photograph is a good example of what “communication” actually means. To invade Russian Poland, Germany and her Austrian allies must transmit men, ammunition, food, supplies of all kinds, horses, and assorted material as well as messages across vast terrain.

To do that across a river requires someone spending and laboring to build a bridge; if it is destroyed by a retreating foe, then an army must build a whole new bridge in its place. Roads and rails are also advantageous to armies, so destroying and building them has also become an art of war well before 1914, when this corps of military science has become known as engineers, or alternatively, pioneers. Not only do they dig trenches and build bridges, at the outbreak of the Great War their duties also include wiring for telegraph and telephone — and blowing it all to hell with explosives.

But a new invention is providing another dimension in military communication. Today, as German troops embark on their first attempt to surround and destroy Russia’s western center of mass in Warsaw, the radio battle takes center stage. 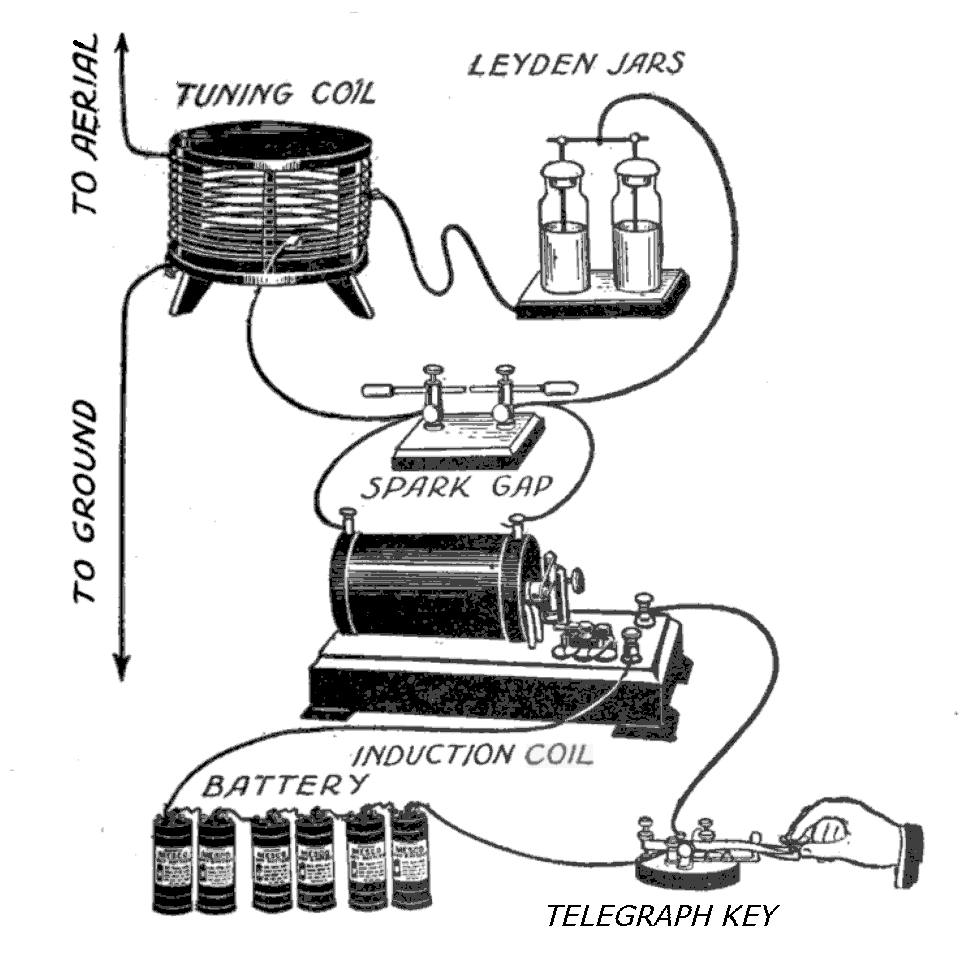 A spark-gap transmitter in principle. Suitable for telling the whole world what you’re thinking — a century before Twitter

Erich von Ludendorff made his career at Tannenberg on the strength of radio intelligence. Because he was operating beyond the reach of his telephony lines, In September General Alexander Samsonov used a ‘spark’ set to communicate with the Tsar’s Stavka (General Staff) in Petrograd (St. Petersburg). Because the spark set does not communicate in just a single frequency, it was not difficult for German intelligence to tell Ludendorff where Samsonov would be and when. The result was the near-complete destruction of Second Army — and great prestige in Berlin for Ludendorff, who will one day call the people of Munich to Hitler’s banners.

It has not taken long for Russia to realize the role of radio communications in the disaster at Tannenberg. As a result, they have used their spark sets to provide disinformation on the location and size of their forces in Poland, where they meet a new offensive by Ludendorff in unexpected strength. The result, at least according to the Russians, is a disaster incurring 60,000 German casualties over seven days.

Still trying to win the war at bayonet-point, Ludendorff orders disastrous assaults in mass formation in the open farm-fields of Poland. After being repulsed in an artillery fire-sack twelve miles from Warsaw, he retreats, destroying the rails behind him as he goes, and leaves the victory for other generals to win. 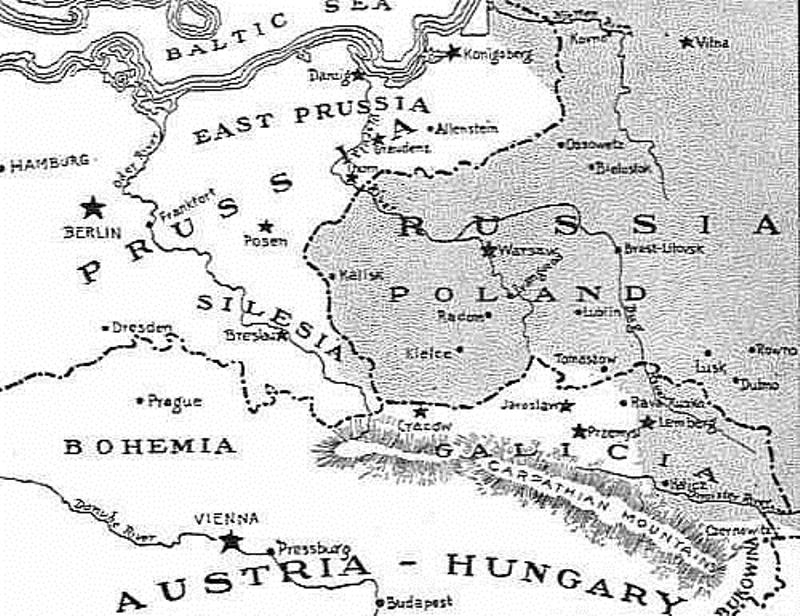 Russia’s immense reserves were already being deployed, but 60% of the Tsar’s peacetime army was already surrounded on three sides by the Central Powers. Today, Austrian formations began serving under German command

When Ludendorff returns later in the month, the Russian armies are unable to supply a forward defense without rails — and the full weight of two more armies is pressing in on the Polish salient. The German offensives of October and November fail, but further attacks eventually succeed in 1915 because of sheer geometry and what we might today call the ‘narrow bandwidth’ of Russian communications.

Anticipating a future German offensive from Silesia, Russia has starved Western Poland of rail lines, but this winds up hindering their defense more than it hurts the German advance from that direction. Russian defensive trenches consist of one line, often far too straight and shallow, with no reserves or secondary lines of defense. Without secure radios, telephony lines provide the only rapid means of commanding an army over vast distances. These wires are immediately and invariably broken at first contact with the enemy. And despite Russia’s advantage in men, some are still arriving at the front without weapons; by the end of October, a shell shortage reduces their guns to just ten rounds a day.

Today, the first Austrian troops are also put under the tactical command of German officers. The Hapsburgs are weak, and their officer corps has been obliterated by the vast, bloody defeats  suffered in Galicia. By the end of the month, Germans will command entire Austro-Hungarian divisions in the field, a trend that will continue to the end of the war. In fact, this will be Field Marshall Conrad von Hötzendorf’s last time commanding an offensive, as the Kaiser’s men take full command of the joint war effort. German troops will now help fight all of the Hapsburgs’ battles. 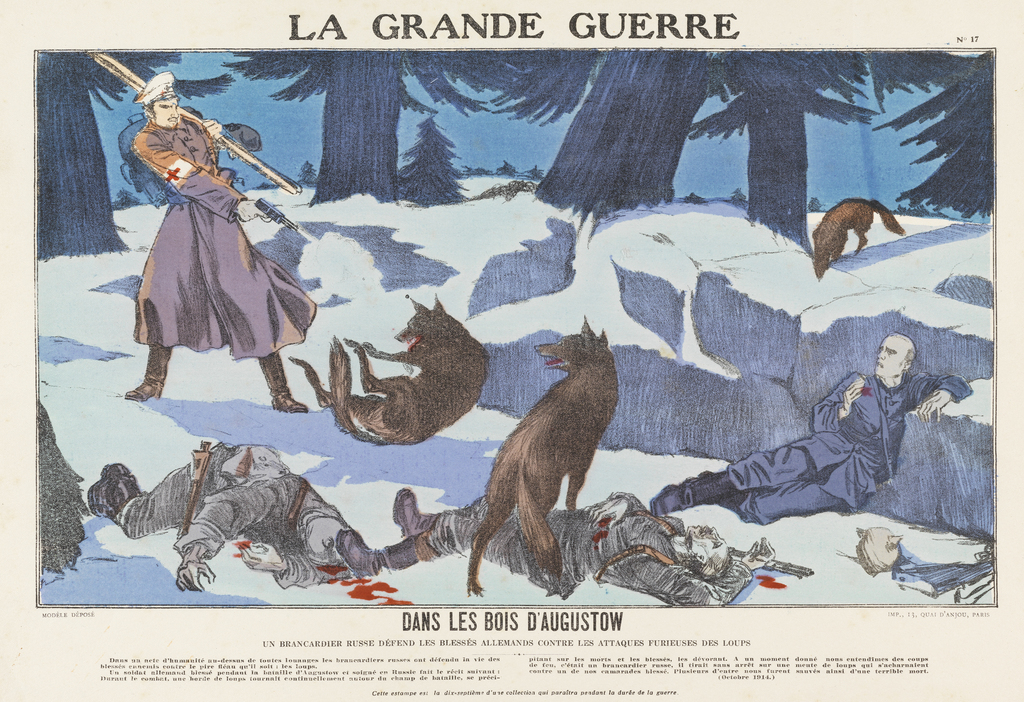 Russian Poland has been the European jewel in the Tsar’s crown. As Warsaw is destroyed by two wars and resurrected each time, she becomes a symbol of Russian resistance to German aggression. It is not an accident that the Soviet Union’s defensive treaty in response to the North Atlantic Treaty Organization is signed in Poland and known as the Warsaw Pact. It is also no accident that after enduring apocalypse twice, Poland is eager to escape both Russian and German domination.