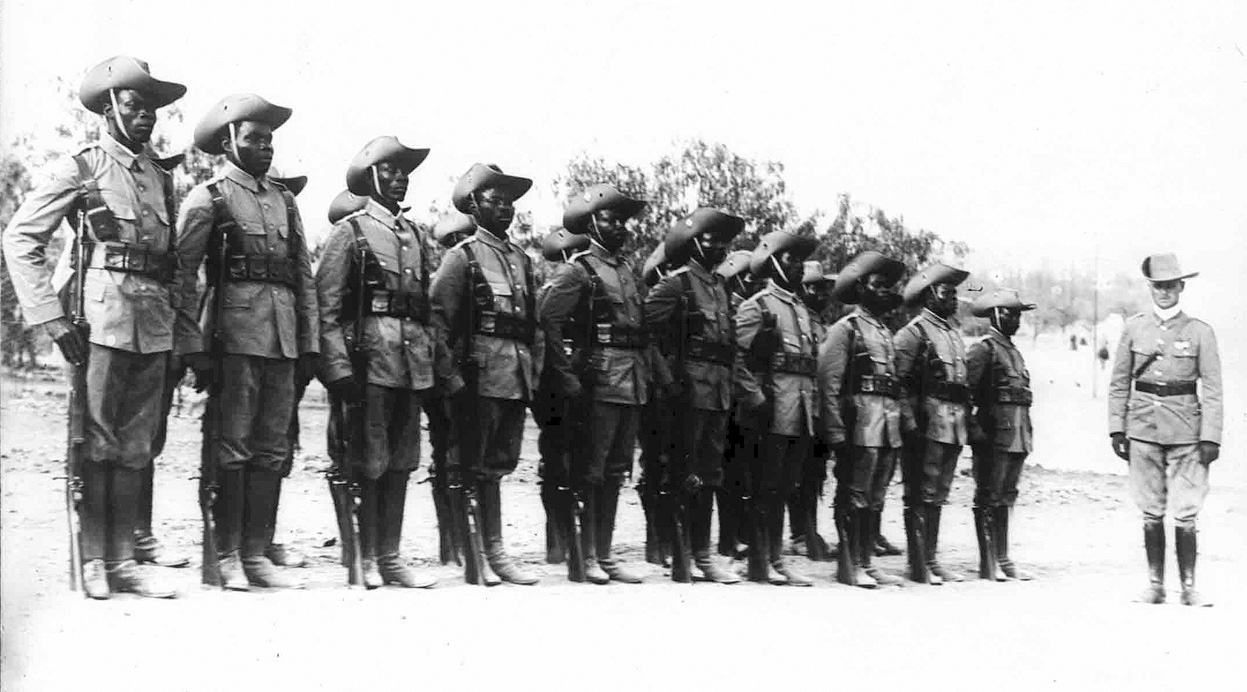 At dawn today, Captain Paul Baumstark emerges from the bush with 300 men and four machine guns to attack a superior force of 850 King’s African Rifles (KAR), Arab Rifles, and Indian troops defending British East Africa along the coast of the Indian Ocean. His assault succeeds in driving the defenders back into the village of Gazi, but late in the morning C Company of the 1st KAR counterattacks.

This far from Europe, where white men are murdering one another at an astonishing rate, no one has received the memorandum that massed infantry charges against rifles and machine guns are suicide. With all their white officers wounded, the native troops of the KAR fall back to their positions. There, Colour-Sergeant Sumani rallies his comrades, organizing another sortie.

Joined by a reinforced company of crack Jind Infantry, Sumani leads a charge that breaks the German assault, which is running low on ammunition and far from home. Baumstark reluctantly leads his small force back into the bush, headed back for German East Africa. Colour-Sergeant Sumani will be awarded the African Distinguished Conduct Medal for his courageous leadership under fire. 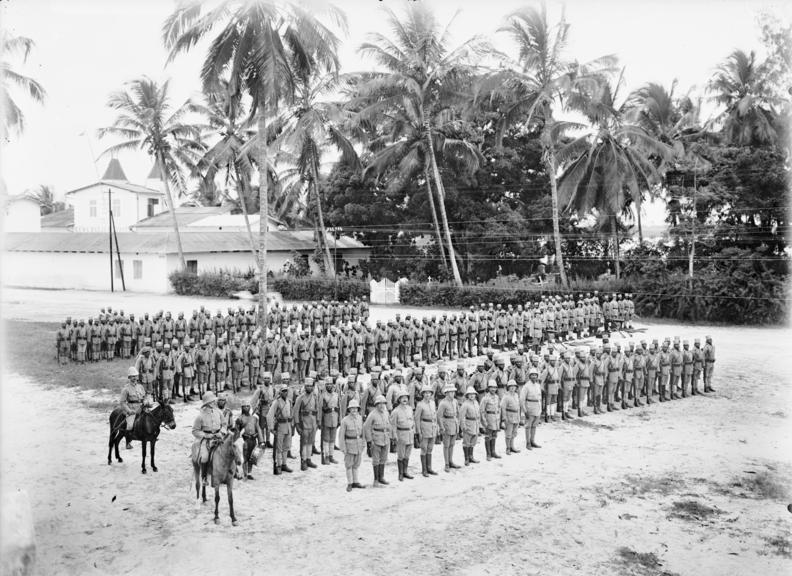 A German-led company of Askaris. Most of the troops who fought in East Africa — on both sides — were Africans

The sudden phenomenon of white men killing each other is already shattering the illusion of white superiority in the African mind. It is a further shock to the colonial system that African men are now ordered to kill white men — and even travel to the white man’s country in order to do it. As seen today, Indian troops do plenty of Britain’s fighting in Africa, the Middle East, and even Europe. Sensing the long-term consequences to colonial mastery of the continent, however, Britain never exports black soldiers to Europe. But France does; a quarter-million Senegalese will serve on the Western Front. Altogether, Britain and France will deploy 650,000 nonwhite troops to Europe in the course of the war.

Germany, which cannot replenish its ranks with colonial recruits, denounces the use of colored troops in Europe as an affront to the solidarity of the white race. German propaganda alleges countless abuses against their dead, for example claiming that Senegalese Tirailleurs have collected ears and noses as trophies. The colonial soldier’s reputation for savagery results in black units being positioned at the vanguard of every offensive as shock troops; soon, French soldiers regard the advance of black fighters as a sure sign that an offensive is about to begin.

Because of their fears and prejudices, Germans often prove unwilling to take black prisoners alive in the trenches. But there is little statistical basis for the notion that these units are ‘cannon fodder:’ despite the way they are used, casualty rates among ‘native troops’ on the Western Front are only slightly higher than other units. Furthermore, hundreds of thousands of colonial subjects serve in French labor units that never engage in any actual fighting; from the French point of view, the chance to sacrifice themselves is an elevating, even civilizing influence. 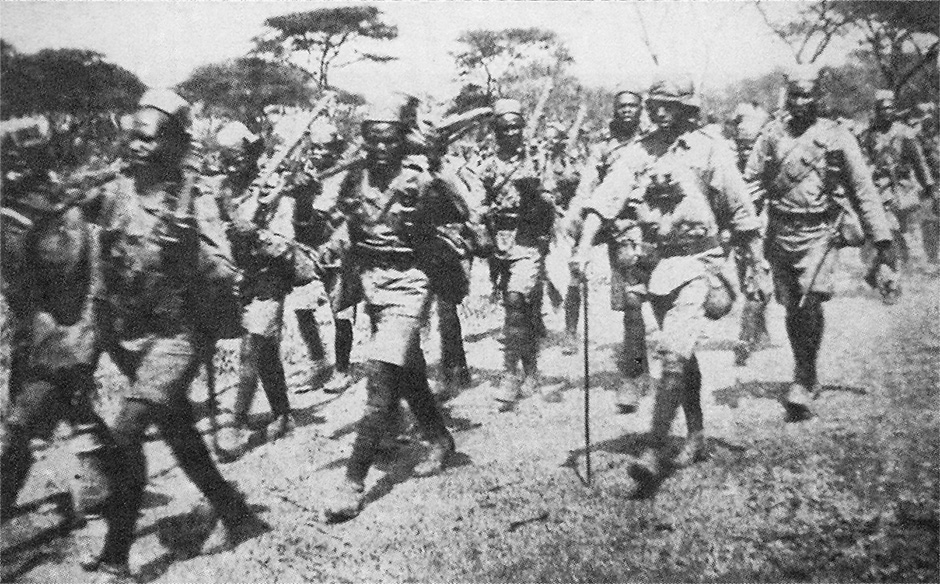 The 1st King’s African Rifles march into Longido in 1916. The white officer has a walking stick

Colonialism has not been gentle anywhere, but Germany has developed a special savagery while establishing their rule on the Dark Continent, and East Africa is no exception to these rules. The colonists have played one tribe against another, putting down any sign of rebellion with maximum cruelty: burned villages, massacred families, and confiscated livestock have become the everyday, normal price of defiance to white rule. When native allies take slaves, their German masters look the other way.

But the near-mystical respect the conquered have learned to feel towards their masters is quickly being eroded now. By 1916, many white officers have lost their baggage — and their status — when their porters and cooks desert them. Their guerrilla campaign against superior allied forces requires a scorched-Earth policy, deepening local resentment wherever they go.

The Askari soldiers stay loyal, however, and postwar German narratives keep making this point. For the postwar romantics, East Africa is the most picturesque theater of war, and their resistance is a gallant stand that has held out to the bitter end. In this view, the Askaris are latter-day Landsknechts — the mercenary troops who burned and destroyed their way across much of Germany throughout the bitter violence of the Thirty Years War — and their loyalty is held as a sign that the colonial cause was justified, however violent colonial rule may have been. 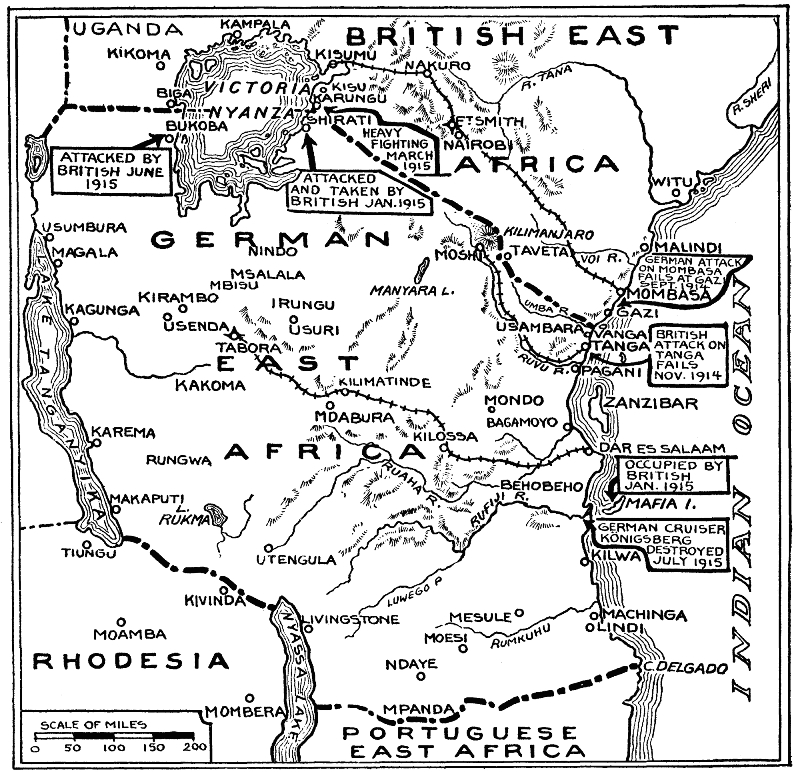 A map of the East African campaign