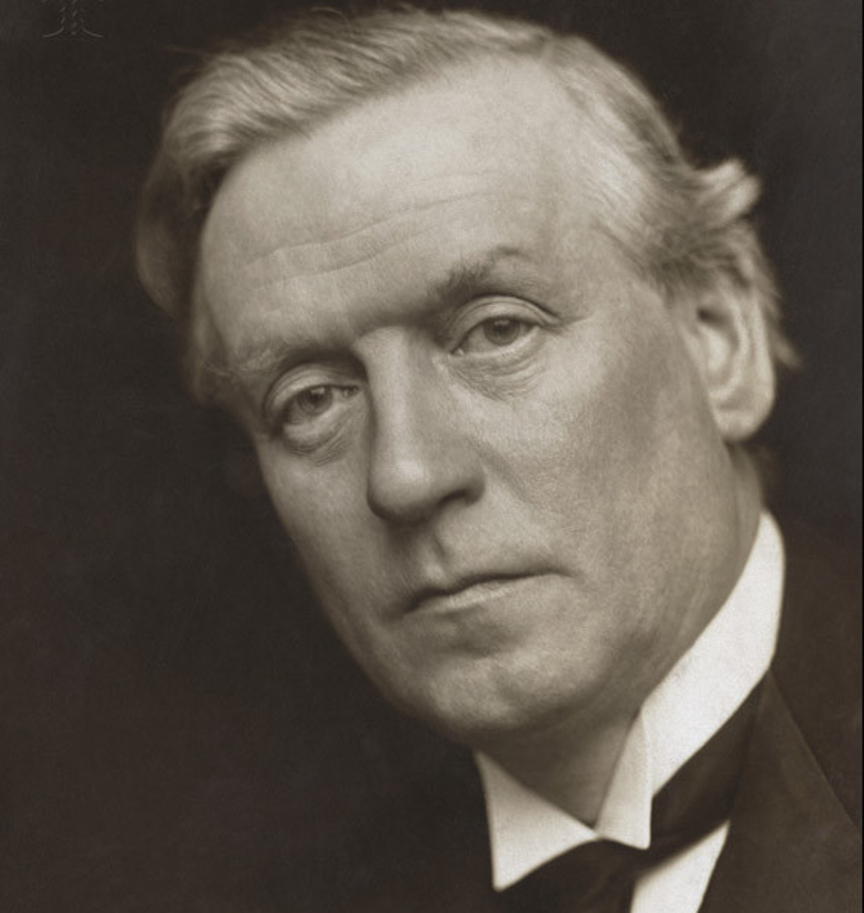 On their way to Manston House in Dublin today, a suffragette throws a hatchet at Prime Minister Herbert Henry Asquith and John Redmond, Minister of Parliament, barely missing Redmond’s cheek. Moments later, Asquith tells a packed audience that Britain’s role in the new war is to “protect the weak against the violence of the strong, who practice the religion of force.”

He blames Germany for the outbreak of the war, declaring that Austria’s issue with Serbia should have been settled peacefully. Germany, he says, has been preparing for this war for a generation, and brought it on because they felt the preparations were complete. Indeed, the Kaiser only recently completed his goal of constructing a fleet large enough to threaten Britain’s naval monopoly as well as the global radio transmission network necessary to conduct war in every ocean.

Referring to widespread, though sometimes inaccurate reports of atrocities in occupied territories, Asquith says the German invasion of Belgium and France “has contributed some of the blackest pages in the somber annals of war.” Then he proceeds to ask the people of Ireland to go fight and die for a crown that has visited centuries of unspeakable atrocity on them. 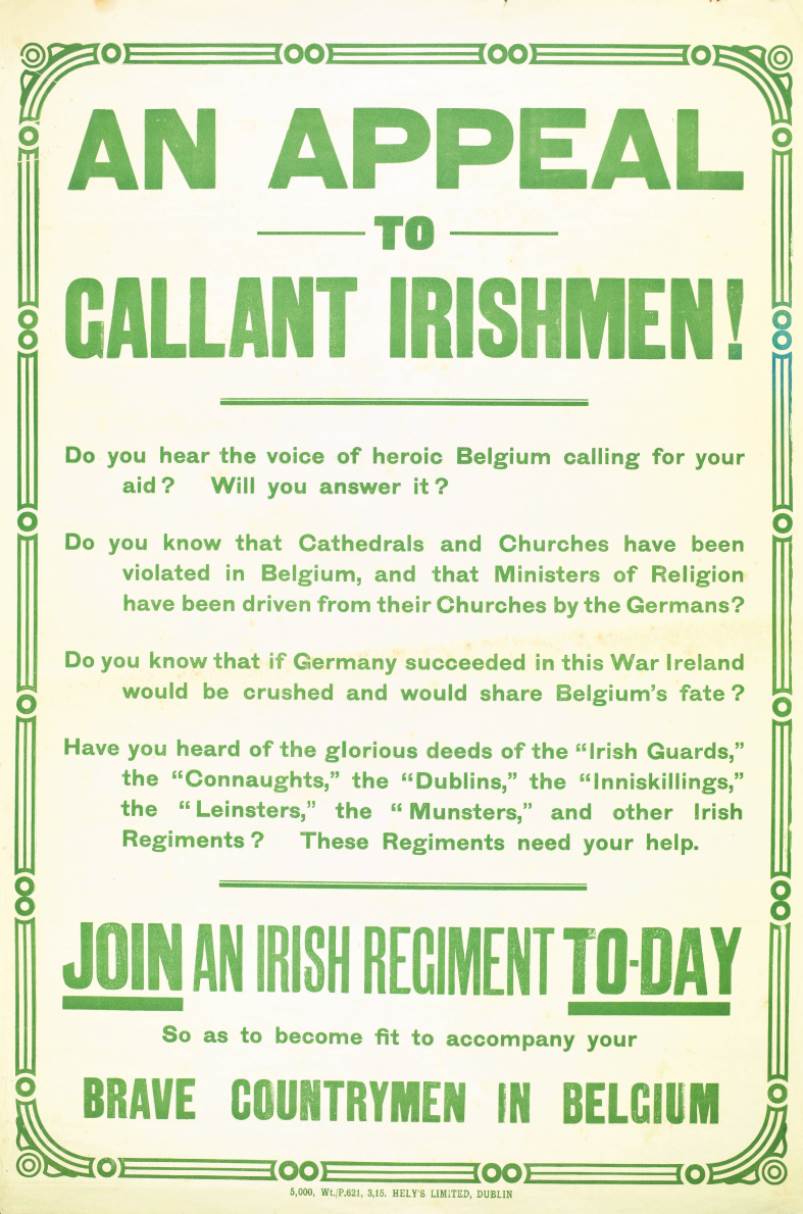 A recruiting poster. Note the call to defend Belgium, and by extension assert the autonomy of Ireland

The choice of location is deliberate. Two years ago, Asquith came here with Redmond to push for Irish Home Rule. Echoing Chancellor Lloyd George’s speech six days ago, Asquith connects Ireland’s long fight for autonomy to the defense of Belgium and Serbia, small countries being bullied by larger neighbors. He mentions the Irish regiments now fighting and dying in France, and calls on the people of Ireland to “heed the cry of the smaller nations to help them in the struggle for freedom.”

“Great is our responsibility for allowing our country to be drawn into such a welter, but there was one thing worse than to take such responsibility, and that was to shirk it,” he says. Half a million men have already volunteered, and another half million are needed. Then, just as George called for the creation of a Welsh army corps, Asquith calls for an Irish army corps to carry the nascent nation’s unique identity into battle.

Asquith asserts the permanent unity of Ireland. “There are two things that have become unthinkable — first, that one section of Irishmen is going to fight another; and, second, that Britain is going to fight either…The animosities between us are scattered like Autumn leaves. We are a united nation, and enjoy liberty, and for that reason we are now fighting for others.”

Then it is John Redmond’s turn. Ireland, he says, is in “heartfelt sympathy” about the war, and will bear her share of burdens and suffering. Now that Ireland has been granted autonomy, she is honor-bound to take her place within the Empire. He has been the foremost advocate of Home Rule for Ireland, but that process has been suspended for the duration of the war. 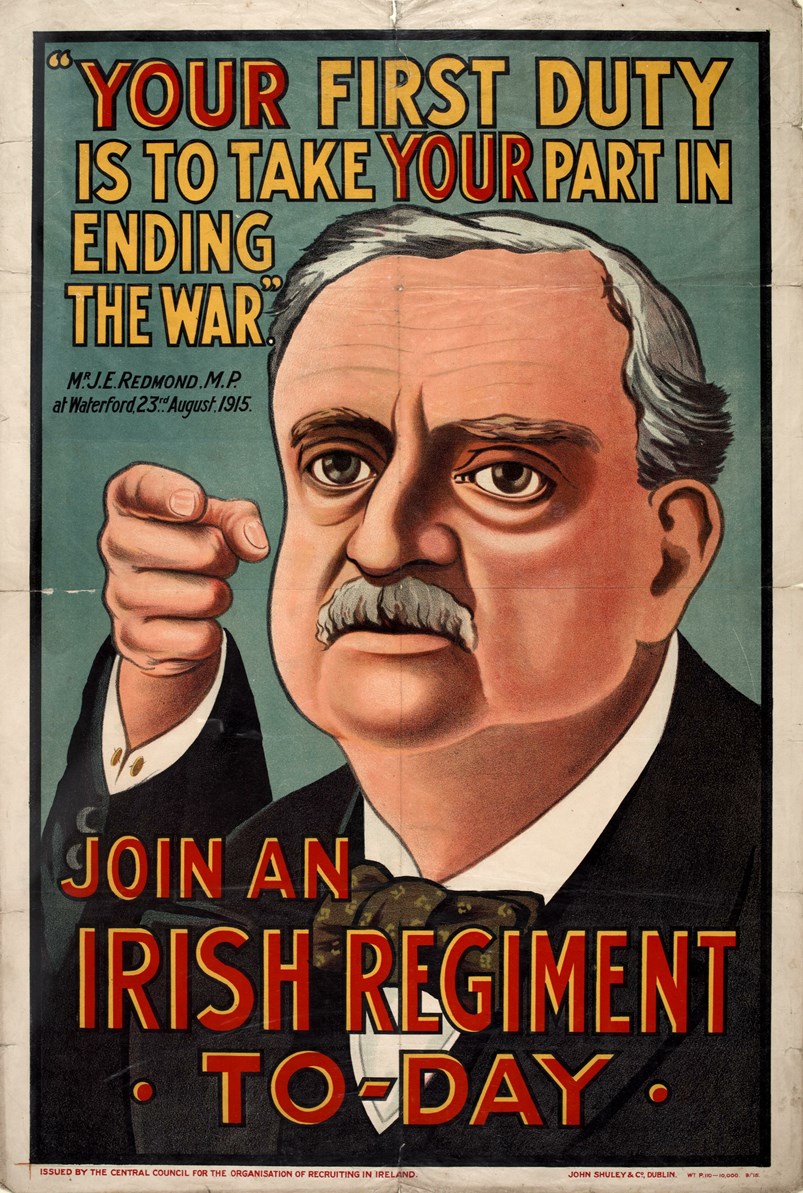 Mary Leigh, the woman who threw the hatchet, escapes arrest to join an accomplice named Gladys Evans. Together, they attempt to set a fire at the Theatre Royal, where Asquith has just enjoyed a show. After igniting curtains behind one of the balconies, they throw flaming furniture into the orchestra and set off homemade bombs. Arrested without resistance, they are sentenced to five years, but only serve a few weeks in prison.