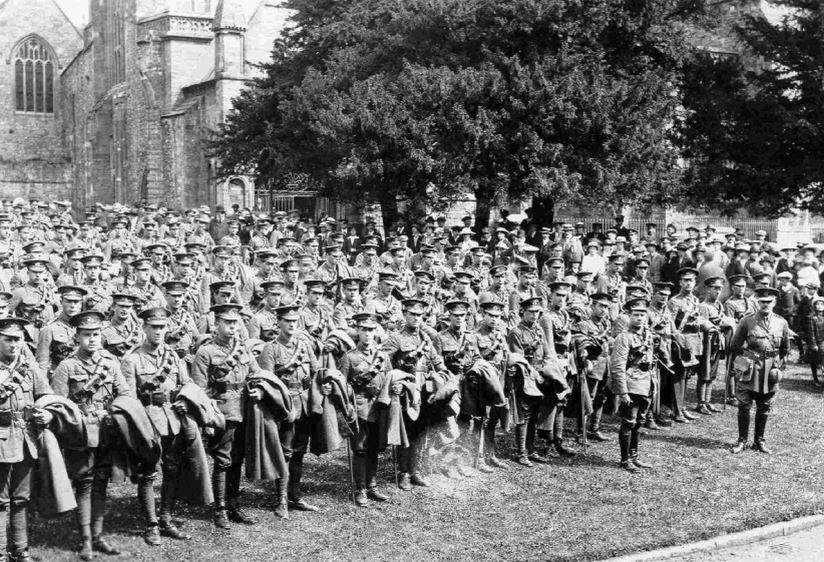 Referring to a middle class farmer, the term ‘yeoman’ is centuries old, but came to be associated with cavalry during the 19th Century. Seen above during mobilization in August 1914, the 1st Regiment of the Queen’s Own Dorset Yeomanry (QODY) was first constituted as a mounted unit, then shipped to Gallipoli as dismounted infantry, seeing some of the biggest fights without being quite at the center of the action. Withdrawn in December, they have been remounted in Egypt as part of the Western Frontier Force, a scratch force put together in answer to the Senussi uprising that has ridden out of western Libya at the direction of Turkish agents.

The campaign has taken place along hundreds of miles of Egyptian coast, where a narrow strip of habitable land borders on the great desert. The QODY is joined by the 1st Regiment of the South African Infantry (SAI), a volunteer force that was intended for the Western Front but redirected to Egypt when the Senussi threat became known. They are supported by air reconnaissance, which proves to be a vital tactical advantage in the open desert, finding and reporting on the Senussi camp, and armored cars of the Royal Naval Air Service commanded by Hugh Grosvenor, the Duke of Westminster. It will prove to be a potent combination today. 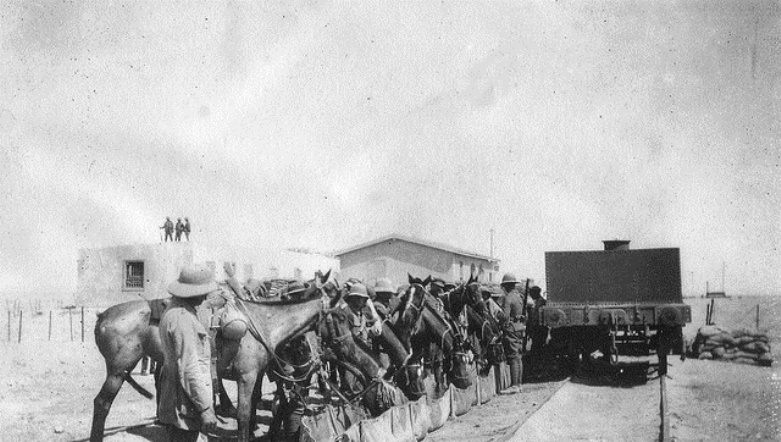 Led by Brigadier General Henry Lukin, the British force moves on the Senussi near Agagia, now known as Barani. The insurgents are armed with machine guns and modern rifles, and they are following Ottoman agents Gaafer Pasha and Nuri Bey, both half-brothers of War Minister Enver Pasha. But Lukin has the advantage of knowing where to find the enemy, and by 11:30 AM his troops have begun a long-range fight that dislodges the Senussi from their camp on some sandy hills. The camel-borne Libyan column is a mile long, and by 3:30 in the afternoon it has moved seven miles, with the 1st SAI falling behind in pursuit. Three of the four armored cars, which mount machine guns and have done a great service, are sand-stuck. Moving to flank the enemy, the QODY’s horses have not fed since the early morning or been watered since yesterday afternoon, while the heat is beginning to affect everyone involved.

It is now or never. Determined not to see the Senussi escape again as they have in previous encounters, unable to hold out any longer in hopes of outflanking the enemy’s automatic fire, Lieutenant Colonel Hugh Maurice Wellesley Souter orders his yeomen to mount up in line for a classical cavalry charge with sabers drawn. Luckily, most of the Senussi’s fire seems to go over their heads. In a letter written after the battle, 2nd Lieutenant J.H. Blaksley gives an account of the scene:

The amazing thing is that when we reached them not one man had gone down. At first they fired very fast and you saw the bullets knocking up the sand in front of you, as the machine guns pumped them out. But as we kept getting nearer, they began to lose their nerve and (I expect) forgot to lower their sights. Anyhow the bullets began going over us, and we saw them firing wildly and beginning to run; but some of them — I expect, the Turkish officers — kept the machine guns playing on us.

As they draw closer, however, Blaksley has two horses shot out from under him in quick succession. Lt. Col. Soutar is also thrown to the ground and momentarily knocked unconscious, yet both officers continue the fight, winning an almost-miraculous victory against long odds.

Six or seven men had, I supposed, recognised me as an officer, anyhow they rushed up to me and abject terror began begging me for their lives. I saw they were men of consequence, but that was all I knew, the chief one was covered with blood, with a sword thrust through his arm. I stood over them as best I could with my revolver, and signed to them that if they stopped their men shooting at me, I would not shoot them. A few seconds later I remember seeing a Senussi shooting one of our wounded (they always do that). He was 50 yards off and I let fly with my revolver, but missed. Meanwhile the wounded officer had literally knelt down and tried to kiss my hand, begging for his life. Just then I saw Col Souter, who (like myself) had had his horse shot, and who had been momentarily stunned by the fall, and at the same time I heard cries of “Gaafar”, and saw a few Senussi running towards me. I fired off a few shots — I do not know whether I hit or not — and Colonel Souter rushed up and put his revolver straight in Gaafer’s face for the wounded officer was none other than he — and then began firing with me at the men who were coming on to rescue him. Gaafar was so terrified that he himself waved them back, and then with some difficulty Colonel Souter was able to get hold of a horse to put him on, and send him back off with the other officers, who were his staff, under an escort to the rear. 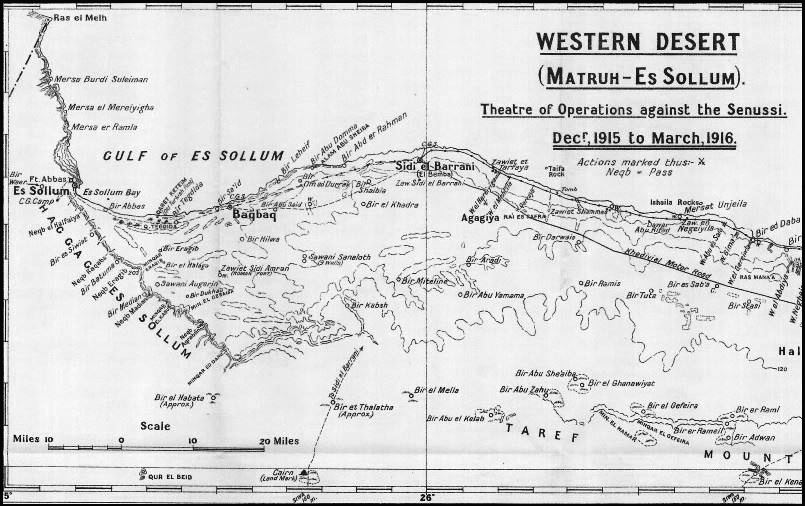 A map of the Senussi campaign with the Libyan border at extreme left. Note the primitive roads west of Sidi el Barrani

Nuri Bey is also injured and carried away by the Senussi on a camel. Breaking under the assault, the defenders might make quick work of the mounted yeomen at close range, but instead they are cut down from behind and scattered. Hundreds are killed. At day’s end, half the QODY’s horses are dead and 58 of the 184 men who rode them are casualties, with 32 of the Western Frontier Force dead and 62 wounded. It is the first time since August 1914 that a cavalry charge has succeeded against infantry armed with modern weapons.

Over the next two days, air reconnaissance spots groups of Senussi moving west carrying white flags or with their hands in the air. With their horses exhausted, the QODY is unable to pursue. During March, however, the Duke of Westminster and his armored cars will use the intelligence provided by pilots to find and capture the last remaining Senussi resistance in Egypt, decisively breaking the uprising. Still a vital branch of military service in the desert, during 1916 the cavalry arm is nevertheless being supplanted by machines. 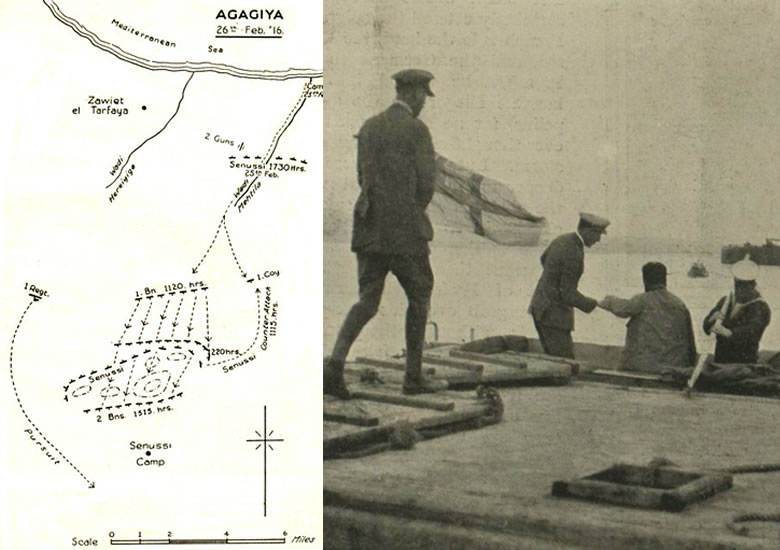 Left: a sketch map of the day’s battle. Right: the rotund Gaafar Pasha being embarked as a prisoner of war