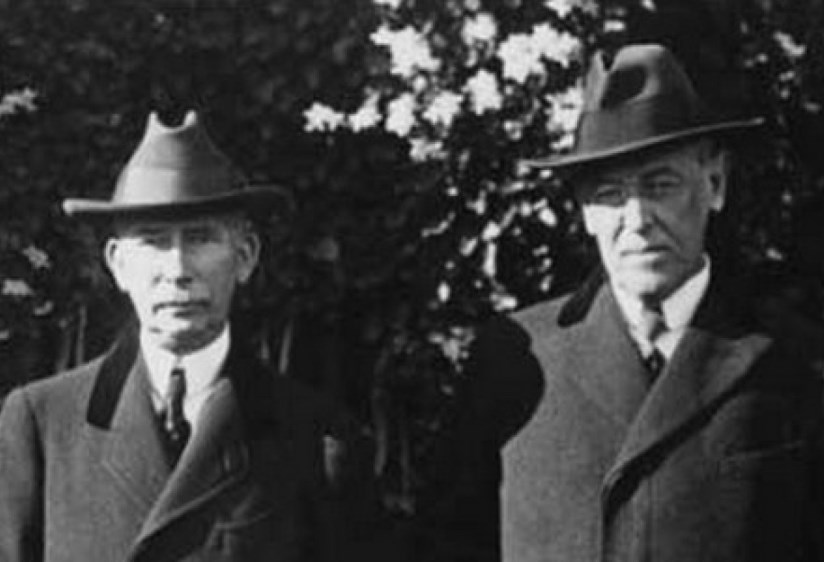 Having helped four successive governors win elections in Texas and serving as their advisers, earning the nickname ‘Colonel,’ Edward Mandell House found a new challenge in the ambitions of Woodrow Wilson. He was instrumental in Wilson’s 1912 electoral victory, refusing a formal role in the cabinet to instead become the president’s right-hand man and political fixer — a position outside of the formal Senate confirmation process that will later be formalized as the White House Chief of Staff. In that capacity, House discretely handled the president’s love affair with his new bride by keeping gossip out of the newspapers and persuading Wilson to delay the wedding for propriety. As a result, Edith will never forgive House.

But House has also become Wilson’s diplomatic agent during the last year as he seeks to play peacemaker in the great global conflict. Crossing the Atlantic in the SS Rotterdam in Jnauary, House has systematically and secretly worked for a US-brokered peace conference. Meeting with French diplomat Pierre Paul Cambon and Prime Minister Aristide Briand in Paris, House gave private assurances that America would not let the war turn against the allies, but would instead intervene. He even indicated a willingness to see Turkey wiped off the map in order to grant territories to Germany and Russia that might satisfy the belligerent powers.

Then, traveling to Belgium, he met King Albert at his headquarters in La Panne near the front. During the 90-minute audience, House proposed letting Germany purchase the Congo and Portuguese Africa in exchange for withdrawal from the nine-tenths of Belgium that Berlin now controls, but the monarch was not enthusiastic.

There are two important things to note here: first, that contrary to Wilson’s public disdain for secret negotiations, House has engaged the European diplomatic scene on its own terms. Underlining this point, House has visited Berlin and dined with the Kaiser without revealing his intentions. Second, with the exception of the Ottomans, the peace proposal House makes is far more generous and fair to the Central Powers than what will emerge after three more years of blood and turmoil. Italy will win its coveted Austrian provinces, but the Hapsburg monarchy will not be disestablished. The Serbian kingdom will be returned to its exiled government, but shall gain no new territories with peace. Though only a verbal outline, it is a relatively fair and just settlement, at least from a European perspective. 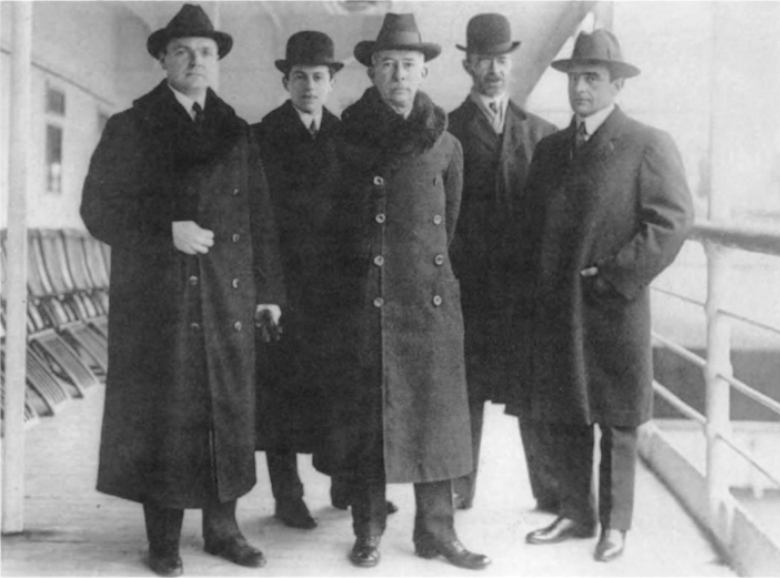 House sailing for Europe on the SS Rotterdam with his staff. House’s wife also accompanied him into the combat zone

After crossing the dangerous English Channel eight days ago, House found US Ambassador Walter Page quite discouraged about America’s image in Britain, but his discussions with his friend Sir Edward Grey, the British Foreign Secretary, have seemed quite positive. So has his lunch with Prime Minister Prime Minister H.H. Asquith and Lord Henry Balfour, as well as his dinner with Lloyd George, who is now the leading voice for total victory in England. Communicating with the president by transatlantic cable on the 18th, House indicated that London was pleased with his conversations in Paris, and interested in backing a call for peace as long as the United States promised to intervene militarily should Germany decline the offer or prove unreasonable at the resulting conference. “I have promised for you that we will throw in all our weight in order to bring (Germany) to terms,” he told Wilson, who gave his approval to move forward with Grey.

Today, House and Grey ink a memorandum reflecting the content of their talks.

Colonel House told me that President Wilson was ready, on hearing from France and England that the moment was opportune, to propose that a Conference should be summoned to put an end to the war.

Should the Allies accept this proposal, and should Germany refuse it, the United States would probably enter the war against Germany.

Colonel House expressed the opinion that, if such a Conference met, it would secure peace on terms not unfavourable to the Allies; and, if it failed to secure peace, the United States would leave the Conference as a belligerent on the side of the Allies, if Germany was unreasonable.

Colonel House expressed an opinion decidedly favourable to the restoration of Belgium, the transfer of Alsace and Lorraine to France, and the acquisition by Russia of an outlet to the sea, though he thought that the loss of territory incurred by Germany in one place would have to be compensated to her by concessions to her in other places outside Europe.

I said that I felt the statement, coming from the President of the United States, to be a matter of such importance that I must inform the Prime Minister and my colleagues; but that I could say nothing until it had received their consideration.

The British Government could, under no circumstances accept or make any proposal except in consultation and agreement with the Allies.

But the promise of peace will prove illusory. The timing of the memorandum could not be worse: just yesterday, the German 5th Army began what will be the longest, and one of the bloodiest, battles of the entire conflict at Verdun. In the weeks to come, France will prove unwilling to seek peace while the military situation is so uncertain. Grey, who has already told House that an angry mob would attack his house if he pursued any peace short of victory, will not contradict Lloyd George or Asquith, who seize on a single word as reason to doubt the American commitment. Reviewing the memorandum in person, Wilson inserts “probably” before “would.” This tiny alteration is enough excuse to derail the entire project. “The thing I fear most is that Germany will break loose in an unrestricted undersea warfare,” House tells his interlocutors, and indeed this will come to pass. Because the entire matter has been conducted in secret, the world will never know how close it came to peace.