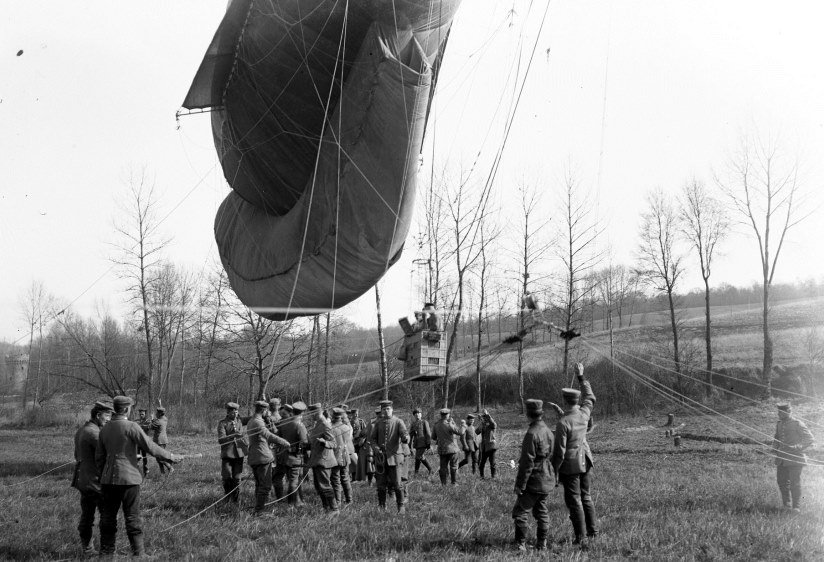 Today was supposed to be the beginning of Germany’s biggest offensive on the Western Front this year. Following a plan finalized on Christmas Eve by Erich von Falkenhayn, the Chief of the General Staff, new roads and rail spurs have been constructed, 1,400 artillery tubes have been positioned and camouflaged, and 2.5 million shells have been transported by 1,300 trains to be laid in store for the first six days of operations. Entire villages in the occupied zone have been emptied to make room for five army corps and to eliminate all possibility of espionage. In total, ten divisions — about 150,000 soldiers — have been marched into the underground shelters (stollen) specially built to conceal their presence. Fokker monoplanes have established complete air supremacy over the sector in recent weeks to deter and destroy French reconnaissance flights.

But then a storm arrived, and this morning the snow and freezing rain reduce visibility to almost zero. Even though the stollen are unheated and subject to flooding, the offensive is postponed at the last moment, and everyone kept on standby until the weather breaks; in the meantime, the unhealthy conditions cause thousands of casualties from intestinal illnesses, poor nutrition, and frostbite. They await the signal to attack without the usual approach trenches that draw harassing fire from the enemy. Instead, when the balloon goes up they will advance over a thousand yards of open ground behind the largest artillery barrage the world has ever seen.

Crown Prince Wilhelm and his staff are products of a military caste that only counts ground won as any kind of victory. Determined to prevent the 5th Army from losing the thread of his plan, which aims at attriting France rather than winning a territorial objective, Falkenhayn maintains absolute control over the reserves for this battle. The opening barrage, which has almost one gun tube for every ten yards of front, will demolish the enemy’s first defensive line, allowing a rapid advance to claim it while the massive artillery corps crawls forward to pound the secondary line of defense. Long-distance guns will keep up a steady fire on French logistical lines to interdict reinforcements and resupply.

It is a detailed, sensible plan that makes best use of the weapons and tactics available in 1916. That this grand strategic vision is being kept on hold by bad weather illustrates just how little things will go according to plan, and why this will be the longest — and one of the bloodiest — battles of the entire conflict.

Despite their best efforts at operational security, it has been impossible for the German Army to completely conceal its preparations, and the French high command is aware that something is happening. But a quiet battle has taken place over the measure of the French response. At the beginning of December, before any of the German preparations, Colonel Émile Driant called a meeting of the Army Committee of the Chamber of Deputies to voice his concerns about the state of the defenses around Verdun. Dying of prostate cancer, in mid-December the French Minister of War, General Joseph-Simon Gallieni, sent a formal letter to Supreme Commander Joseph Joffre inquiring after sections of the Western Front where the defenses are thin, including Verdun.

From different sources there are forthcoming accounts of organization deficiencies in the defensive arrangements in particular and notably in the region of Muerthe. The Toul and Verdun trench system would seem to be less complete than on the greater part of the front. This situation, if exact, may have the most regrettable consequences. Any break-through by the enemy in these conditions would involve not only your own responsibility, but that of the whole government.

The most recent information of this war proves superabundantly that first lines can be forced, but that the resistance of the subsequent lines is such as to check the attack, nevertheless, after the initial success. I shall be grateful if you will be so good as to put me in the position to give assurance that on all points of our front the organization of at least two defensive lines has been planned and carried out with all indispensable support in the way of passive obstacles…

In response, Joffre reminded Gallieni of his October orders to subordinate army commands requiring secondary and tertiary lines of defense, pointed to trench construction projects that were underway, demanded to know who had been undermining his authority by reporting otherwise to the government, expressed his disappointment at not having the government’s full confidence, and denied that Verdun was vulnerable to a German offensive. “I ask only one thing,” he declared in mid-January, “that the Germans should attack and should do so at Verdun.”

Regardless of this intransigence, however, Joffre’s real problem is that France is simply short of everything needed to defend a front four hundred miles long: the available manpower, barbed wire, tools, and even telephone wire are just not on hand. France is particularly short of heavy artillery; altogether, there are just 270 guns of all sizes to counter the massive German barrage. It is also unfair to blame Joffre for the state of the twenty forts around Verdun. Already obsolete against the heaviest German guns, which have been destroying concrete fortifications with contemptuous ease throughout the conflict, the Verdun forts have mostly been stripped of their artillery and troops, both of which are badly needed elsewhere. In any case, the forts will play almost no role in the actual fighting.

Nor has Joffre been inactive. Belated, yet critical improvements have been underway for weeks. Bridges over the Meuse are being added, and the road from bar-le-Duc to Verdun is under repair, with the project actually completed on the day after the Germans finally begin their offensive. An endless column of motor vehicles will be the salvation of Verdun, for the only railroad from Paris to the city is under constant fire where it passes close to the German lines in the Argonne, and it is only a single-track line. Two extra divisions are marching into the sector, with the last battalions arriving just in the nick of time. The salvation of France will be a very near thing indeed. 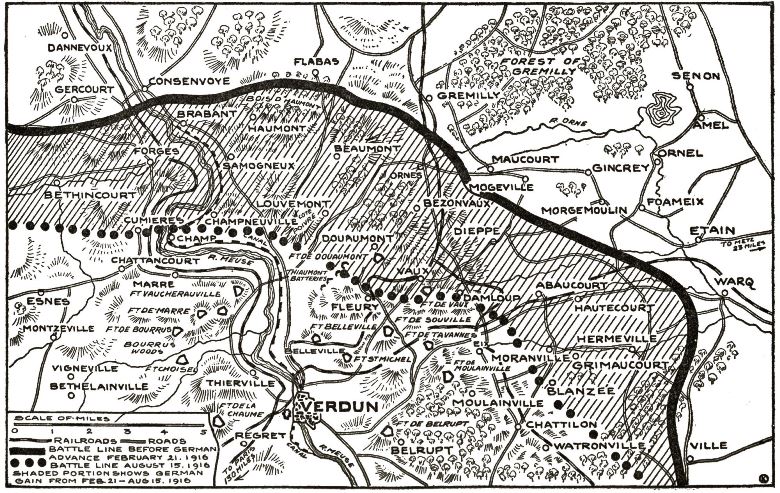 A map of the Verdun sector, where more than 700,000 men will become casualties before the end of 1916