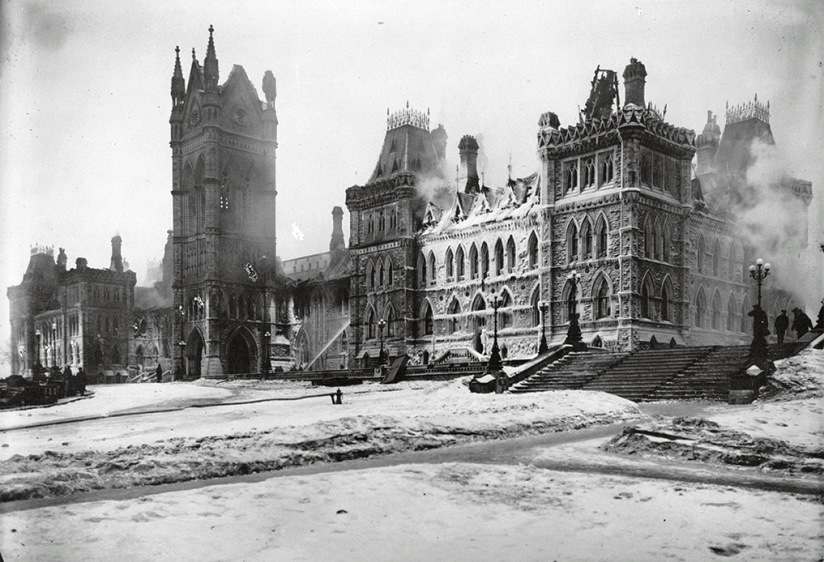 At about 9 PM local time on February 3rd, Conservative MP Frank Glass was studying the newspapers in the reading room at Centre Block, the Canadian parliament building, when he felt a wave of heat against his leg. At first, he assumed it was the boiler burping again, as it often did. But as he turned to look, the distinctive odor of burning paper filled his nostrils. It was the second time in just three days that a fire had started in the reading room, but whereas the previous incident was snuffed quickly by Conservative MP William Weichel and a friend who managed to stomp out the flames, this time the fire spread too quickly — and human actions only made it worse. Glass alerted police in the hallway, who attempted to put out the blaze with fire extinguishers. But their design created too strong a spray within too tight a cone, thus scattering the burning embers throughout the room to land on other newspapers as well as the 20,000 books shelved throughout the chamber.

Moments later, the woof of a larger ignition ensured disaster when the resulting air pressure forced the doors open at either end of the reading room, allowing the fire to spread into corridors lined with pine wood wardrobes. The wooden walls were varnished with flammable oil, and so the blaze spread very quickly. In just a matter of minutes, the entire Gothic structure was on fire and its occupants were evacuating in a panic. Seven people died, including two female guests of House speaker Albert Sévigny who returned to their rooms to recover their fur coats rather than face the winter chill without them. Firefighters raced to the scene, braving the danger to rescue people trapped inside and save the beloved symbol of Canadian nationhood. But by 12:30, both houses of Parliament were wrapped in flames. Only the great Library of Parliament was preserved thanks to the swift action of its attendant, who shut the iron doors separating it from Centre Block. As dawn broke, it became sadly clear that the home of Canada’s government was a total loss, with damage estimated at $8 million. 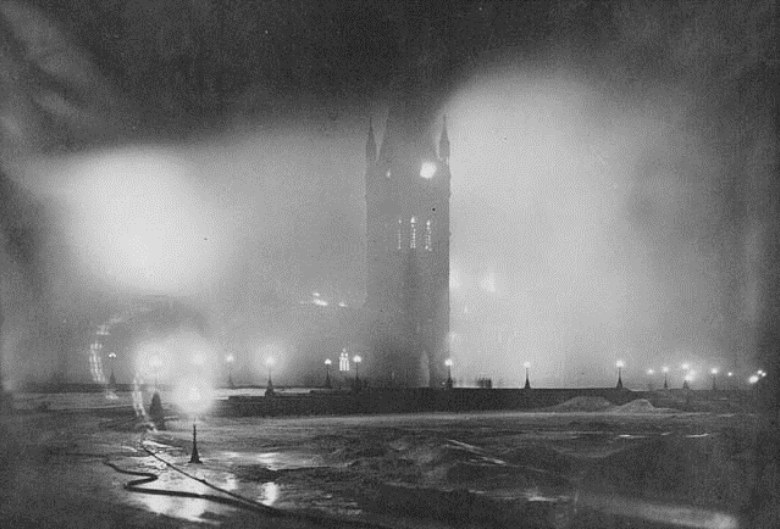 A photograph taken about a half-hour after midnight while the fire was at peak destruction. Note the fire hoses in foreground

News of the fire reached London after the morning papers had already been delivered, and so today is the first time headlines carry the story in England. Whereas the most obvious explanations for the conflagration are mundane — the room had only just been wired for electric lighting, which was notoriously unsafe a century ago, and the rule against smoking in the reading room was never enforced — wartime speculation has already overtaken more reasonable notions of the fire’s cause. This morning’s edition of the Daily Telegraph is a perfect example of the runaway effect on display.

A profound sensation has been caused throughout Canada by the burning of Parliament Buildings, Ottawa, last night, and the growing suspicion that this represents part of the malignant activities of the German Embassy at Washington as exhibited by the work of Captain Boy-Ed.

Mr. M. Martin, of Montreal, who is a member of the Canadian Parliament, and who first discovered the fire, declares positively that he heard at least one explosion, while the extraordinary rapidity with which the fire spread would indicate incendiarism.

Immediate steps are being taken to have stringest investigation made, but the destruction is so complete that there is little likelihood of much light being thrown on the cause of the fire.

If it was the work of a hostile incendiary, he evidently planned it well, as the Reading Room where the fire started was in the centre of the building, with converging corridors wood-lined, and consequently admirably adapted to spread the conflagration as they did.

Without any real evidence, the blaze is blithely compared to known incidents of German sabotage in North America, with concern-trolling added for good measure.

In view of the attempt to blow up Vanceborough Bridge, with other hostile activities now definitely traced to German officials in the United States, the probable destruction of Parliament Buildings will lead to stricter regulations against alien enemies, who have hitherto been allowed a large degree of liberty, and were only compelled to report to Provosts Marshal from time to time.

This is not the first time that Canadians have let their imaginations get the better of them. Almost exactly one year ago, a border prank by American boys put Ottawa on high alert when a series of lamp-laden balloons was mistaken for a German air raid. Here again on page 9 of the Telegraph, unconfirmed reports, unsourced quotes, and erroneous statements of fact are thrown together into an almost-positive declaration that sabotage by sinister enemy agents must be responsible.

Dispatches from Ottawa printed here this afternoon declare that the circumstantial evidence of German guilt has been submitted by Mr. E. M. Macdonald, a prominent Liberal member. Mr. Macdonald states that during the dinner recess last evening, about an hour before the fire alarm sounded, he was attracted by a suspicious-looking foreigner. The man seemed nervous, and was pacing up and down the corridors without any apparent business or destination. Mr. Macdonald spoke to some colleagues at the time as to the peculiar conduct of the stranger, who suddenly disappeared. Less than half an hour later the building was in flames.

The suspicion that this mysterious individual was responsible for the awful catastrophe that followed his disappearance is shared by practically every member. “This is no ordinary fire,” declared one of the coolest and clearest headed men in Parliament. “It seems beyond belief that an ordinary fire should have gained such a terrible impetus in less than five minutes if it had its origin in the usual way. There must have been something other than mere wood and paper to start such a terrible blaze with such extraordinary speed.”

All who escaped from the burning buildings are firm in their conviction that bombs with time-fuses were placed in the Reading Room during the dinner recess, and these, probably aided by a chemical device of some kind, explain the terrible suddenness with which the building became enveloped in flames. Accepting the theory that it was first started by a bomb or a series of bombs, the American police express the opinion that German secret service agents, checkmated, at least for a time, in their moves in the United States, carried their campaign of terrorism across the Canadian border.

[…] Investigation at present strengthens the suspicion that the fire was of incendiary origin. The only person in the reading room when the fire occurred was a woman, perusing the files. Her statement is that there was a sudden flash, and in an instant the newspaper files were in flames. There was only a slight detonation, but the force was sufficient to open the swinging doors at opposite ends of the room leading respectively to the Senate and the House of Commons corridors.

Adding fuel to this irresponsible fire is American newspaper editor John Rathom, a fabricator and propagandist in the pay of the British embassy who claims to have received advanced warning of an attack on the building. In fact, the German diplomatic personnel who did operate a sabotage ring in the United States have already been deported, and their networks’ activities almost completely shut down. Yet a century later, many people still maintain that a ‘pencil bomb’ was responsible for what was almost certainly another example of the lax safety standards and primitive safety engineering which made daily life so perilous at the time. It is another example of Great War myths that refuse to die. 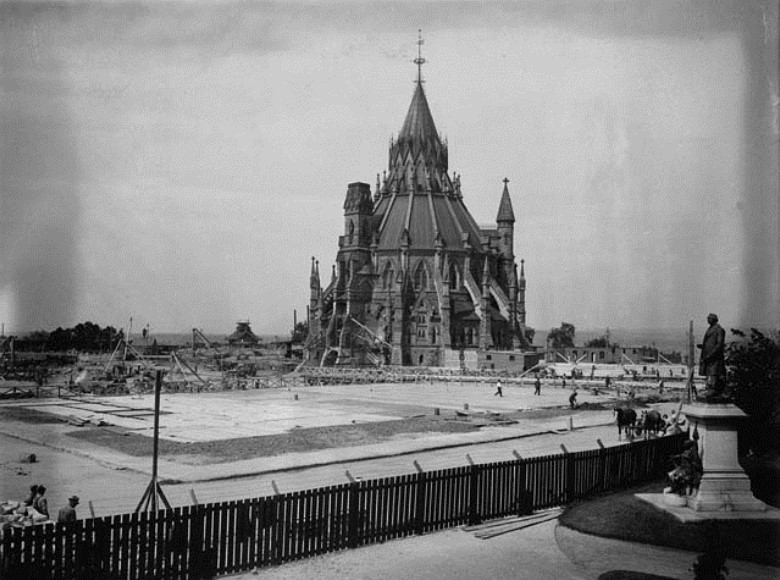