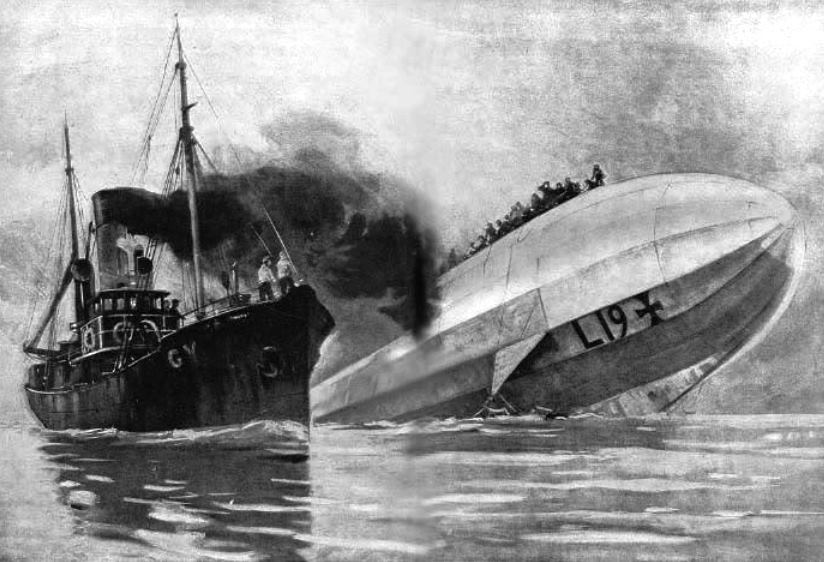 The King Stephen, a 162-ton fishing trawler out of Grimsby, has been fishing in forbidden waters 110 miles east of Flamborough Head all night when her first mate spots a distant light just before dawn this morning. Hauling in their nets, the crew set out to investigate just after 6 AM. Although the North Sea is smooth, the wheelhouse roof is covered in frost, creating deadly conditions for any man in the water. But as dawn breaks, the six Englishmen discover that the signal-lamp which has summoned them from their clandestine fishing is being operated from the tip of a downed Zeppelin floating in the water.

Despite the calm, the buoyant half-collapsed airship L 19 bobs dangerously in the water. As the King Stephen approaches, the signaler is joined by seven more and then eight more men on safety lines attached to the upper deck, riding fifty feet over the water on the unsteady airframe. Commanded by Kapitänleutnant Odo Löwe, L 19 is a German Navy craft that has already become well-known to neutral merchant ships operating in the North Sea since her maiden flight in November; on at least one occasion, Löwe has actually descended alongside a Swedish ship for inspection. On another patrol, his crew were able to catch three Royal Navy seaplane tenders as they prepared to launch their aircraft in another air raid on the German port of Cuxhaven, spoiling the attack. But their luck has run out on Germany’s largest attempted bombing mission of the war so far. 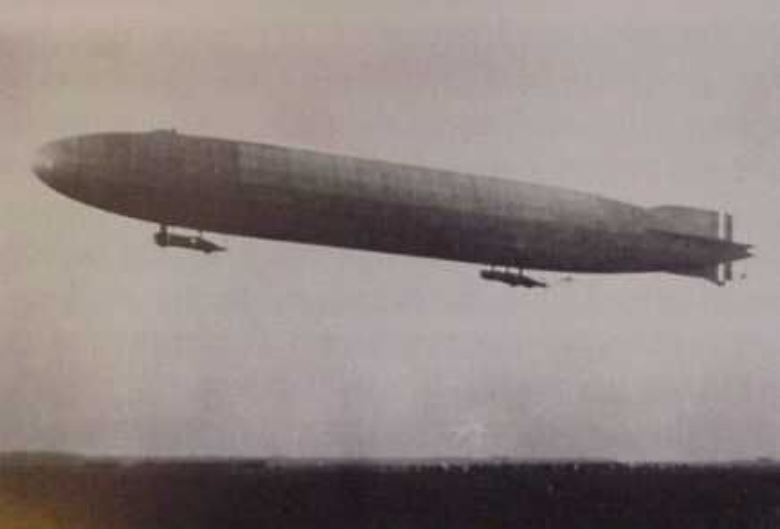 A view of the L 19. In addition to the front and rear gondolas, she had three machine gun mounts on top and one in the tail

Leaving their sheds on January 31st, nine Zeppelins made landfall over Britain in the evening darkness and departed their target zones by midnight. This attempt to strike major industrial sites in Britain is an example of the emerging doctrine of ‘strategic bombing,’ wherein air warfare planners try to destroy their enemy’s means of conducting industrial warfare, but it was largely unsuccessful in damaging the British war effort. nevertheless, German propaganda trumpeted a great victory yesterday.

On the night of 31st January one of our naval airship squadrons dropped large quantities of explosive and fire-raising bombs of docks, harbors, and factories in and near Liverpool and Birkenhead, on the iron foundries and smelting furnaces of Nottingham and Sheffield, and the great industrial works on the Humber and near Great Yarmouth.

Everywhere marked effects were observed in the gigantic explosions and serious outbursts of fire. On the Humber a battery was also silenced.

Our airships were heavily fired on from all directions, but were not hit, and safely returned.

None of this is true. While more than seventy civilians were killed and over a hundred injured by the 220 bombs dropped, fog and blackouts combined to draw the Zeppelins far off target, causing them to strike the West Midlands towns of Bradley, Tipton, Wednesbury and Walsall instead. Furthermore, not all of the airships has returned safely, for the L 19 experienced failures in three of its four Maybach engines. Suffering melted crank bearings, broken connecting rods, fractured crankshafts, and other defects, their design has proven unreliable, and so the L 19 found itself almost helpless yesterday when, just after 4 PM, Kapitänleutnant Löwe made his last radio transmission to inform the German Navy that his Telefunken set was malfunctioning. Shortly thereafter, Dutch shore batteries on the island of Ameland opened fire in accordance with standing orders, puncturing the gasbags and reportedly setting the airship on fire. 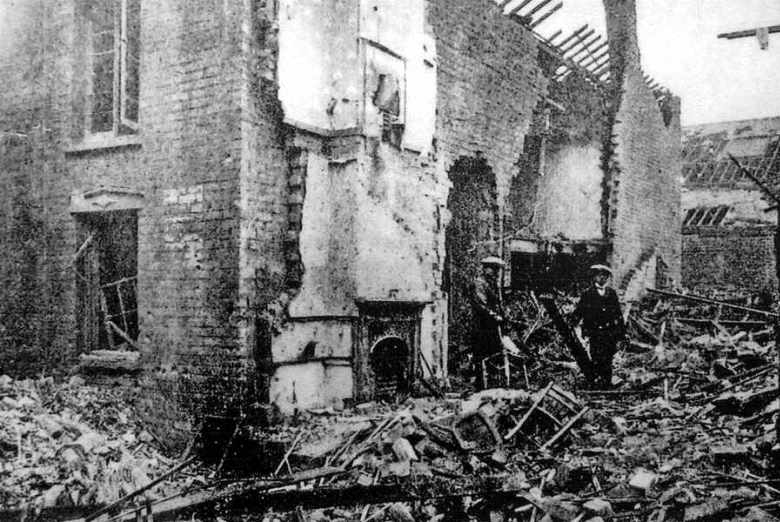 Aboard the King Stephen, skipper William Martin confers with his crew. “I knew what the Germans had done in the North Sea,” he writes later, “and besides, Zeppelin crews dropping bombs on houses and killing women and children didn’t appeal to me.” Despite pleas and assurances from the Germans, First Mate George Denny is afraid they will overpower the trawler’s small crew. “There were about twenty or twenty-five of them and only nine of us,” he says later. “They would all have revolvers and we had nothing but sticks. So we thought it was not safe to take them on board our trawler…What do you think would have happened if we had invited them on board? They could have easily overpowered us and taken our ship to Germany with us as prisoners — that is if they didn’t pitch us overboard first.” The King Stephen has no lifeboat, and it is not possible to tow the delicate airframe without destroying it. 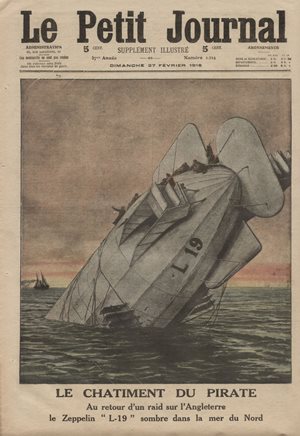 Turning away, the King Stephen is pursued by the anguished howls of condemned men. “As we left, some of the Germans, I am told, but personally did not hear it, shouted out ‘Gott strafe England’ (May God punish England) and they shook their fists at us,” Denny says. The winds pick up shortly afterwards, and although Captain Martin does report their find to the British Navy, he gives them the wrong position for fear that he will be punished for fishing in a restricted area.

Four of the German aviators put messages for their families into a bottle, which is recovered six months later. Only one body is ever recovered when it washes ashore in June. But the German press finds out about the incident almost immediately thanks to the British press, which quotes Martin and Denny at length. Opinion is divided in England; while most people support his actions, seafarers have strong feelings about being left to die on the open water, and Captain Martin is excoriated by those who believe there is no excuse for abandoning stricken sailors, even enemies in wartime. He receives hate mail as well as letters of support. The German press is merciless, branding him a war criminal and leveraging the negative commentary in England to do so.

Despite his subterfuge, Martin will never sail again. Immediately following the incident, his boat is requisitioned as a Q-ship to hunt for submarines with a 6-pounder Hotchkiss gun hidden on deck. He dies of heart failure in February 1917 at the age of 45, reputedly broken by drink, paranoia, and the heavy weight that lies on his conscience. Citing nonexistent articles in British newspapers, the German Lokal-Anzeiger reports that “Captain Martin…died as the result of persecution. They say that he received threatening letters from English people who mean well toward the Germans, and that he was so deeply moved by them that he finally became insane.”