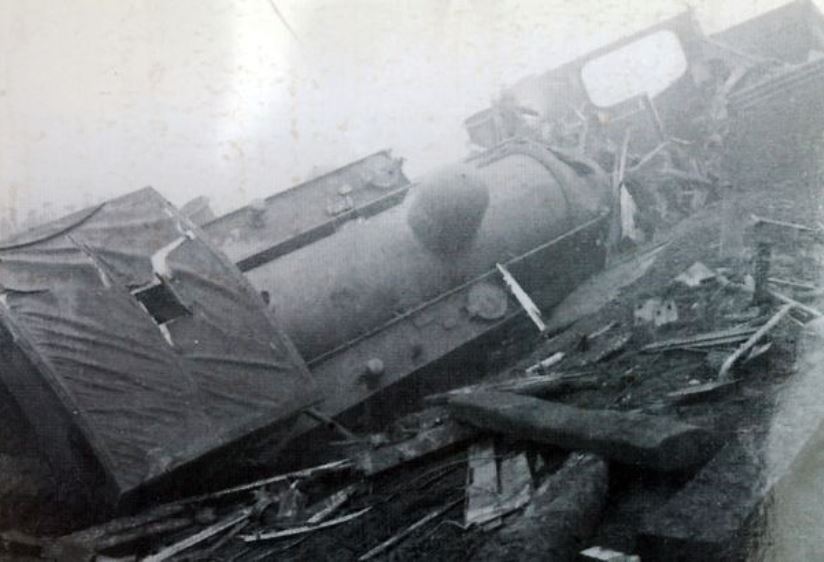 On the North Eastern Railway between Newcastle upon Tyne and South Shields, below the Bede Metro station, there is a junction with a graded spur to Tyne Dock Bottom. The weather is foggy this morning as another busy day of wartime railroad traffic is underway. A light engine uncouples from six goods cars and comes to a stop on the main line; the cold and wet keep the fireman aboard the engine for seventeen minutes, a clear violation of Rule 55, while poor visibility prevents the signalman at St. Bedes Junction from seeing the small locomotive. As a result, when the signal man accepts a passenger train to Newcastle and an empty stock train on its way to South Shields, using both tracks with an unseen and unreported obstacle waiting, disaster ensues.

The collision of passenger train and railyard engine tosses them both off the tracks with contempt, instantly derailing the stock train on the opposite track, and crushes the first two of seven passenger cars like tin cans. The fireman aboard the freight train is killed and the driver badly hurt, but is at least empty of riders and inert, whereas the passenger train is equipped with obsolete, unsafe gas lighting systems. The coaches in use for the 7:05 to Newcastle today had been pulled out of service and replaced by new ones equipped with much safer electricity before the war, but have returned to use as a result of increased wartime rail traffic, imposing a great hazard on civilian travel. Seven months after an accident involving the same type of passenger cars killed or injured 472 people at Quintinshill in what remains the deadliest accident in British rail history, they have still not been withdrawn again from service –and despite nominal centralization of the railroad industry as a result of the ‘war effort,’ the only regulatory response by the British state to today’s accident is a circular urging these bombs-on-wheels to be phased out quickly, please.

Eighteen people are incinerated by the accident today, including three soldiers in uniform, as the first passenger car disappears in a ball of fire. Their bodies are the most gruesome and difficult to identify, while 81 passengers and crew are hospitalized for a gamut of injuries such as concussions, broken bones, and severe shock. Acting quickly, the signalman closes his tracks to all traffic while courageous rail hands quickly uncouple the remaining five cars of the passenger train, saving their stricken occupants from the flames. It is a bad morning for everyone that might have been even worse for everyone, and the year 1915 has seen more than its share of days like this. Numbed by the darkening cold — and the sad, deadly drumbeat of war — the British press hardly remarks on the incident. 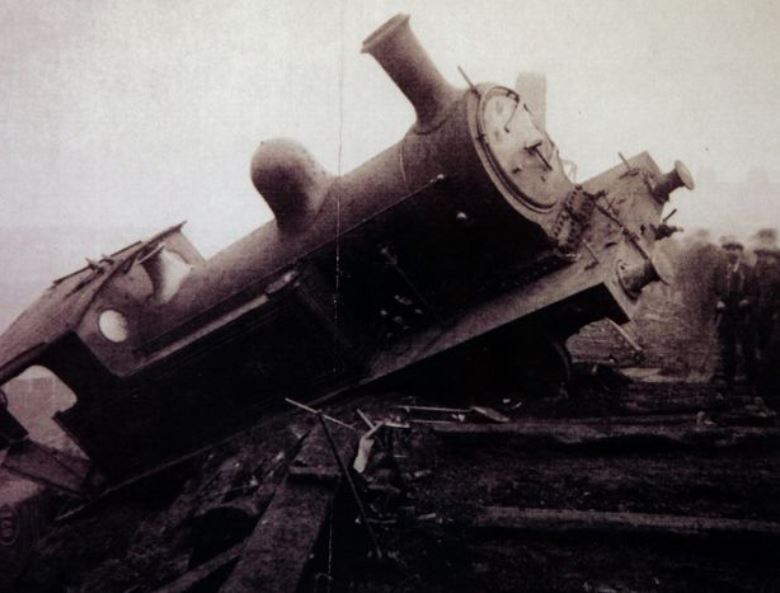 Another view of the destroyed locomotives at Jarrow today. The year has seen a spike in British railroad accidents

A century later, it is sometimes easy to forget how treacherous and precarious a ‘modern life’ was at the time of the Great War. In addition to train accidents, there were destructive and deadly fires, while disease cures and vaccines were still rudimentary by our standards and infections were an enormous hazard. The battlefields of 1915 are producing casualties who die in hospital even when evacuated promptly, or who survive the immediate wound only to waste from grotesque deformities and amputations, or who become suicidal from constant pain, or exhibit clear changes in personality from head trauma. A new era of medicine is underway as doctors and nurses innovate burn treatments, surgical techniques, and rehabilitative care methods to answer the profound injuries of the modern battlefield, with impacts that are still felt in the ways that EMTs, ERs, hospitals, and therapeutic services function every day now.

Not only are accidents more easily survived, and injuries better-treated, than they were before, but the science of accident prevention has advanced by leaps and bounds in the last century. Fallible human systems have been replaced with automation wherever possible, especially the reporting and signaling functions, making it easier for railroad managers and engineers to avoid danger and operate safely. Disasters like the one a century ago today happen less often because in the fog, a signal box is now better-informed than the person it has replaced. Yet as long as humans remain cogs within any scheme, their human needs and motivations will always conflict with the best safety systems. People break rules, and take unscheduled breaks, and occasionally break seemingly-foolproof safety systems.

A century ago, the most prominent example of the latter phenomenon are exploding battleships. The HMS Bulwark was annihilated in a massive detonation last year, while the Italian Bennedetto Brin sank after a similar onboard blast this September, with each incident killing hundreds of sailors. Improperly-stored and expired propellant are responsible for both disasters. During the 20th Century, the term ‘Murphy’s Law’ will be coined to describe the phenomenon of engineers trying to remove the human factor from their designs — and the human propensity for exceeding the best efforts of engineers anyway: ‘what can go wrong, will go wrong.’

In fact, one might argue the entire Great War is an enormous, terribly-lethal accident resulting from the actions of humans who had exceeded the tolerances of the diplomatic machinery of Europe over their petty pride, missing important signals amid their entangling alliances, resulting in the eminently-avoidable collision of armies that is still ongoing as 1915 marches into oblivion. 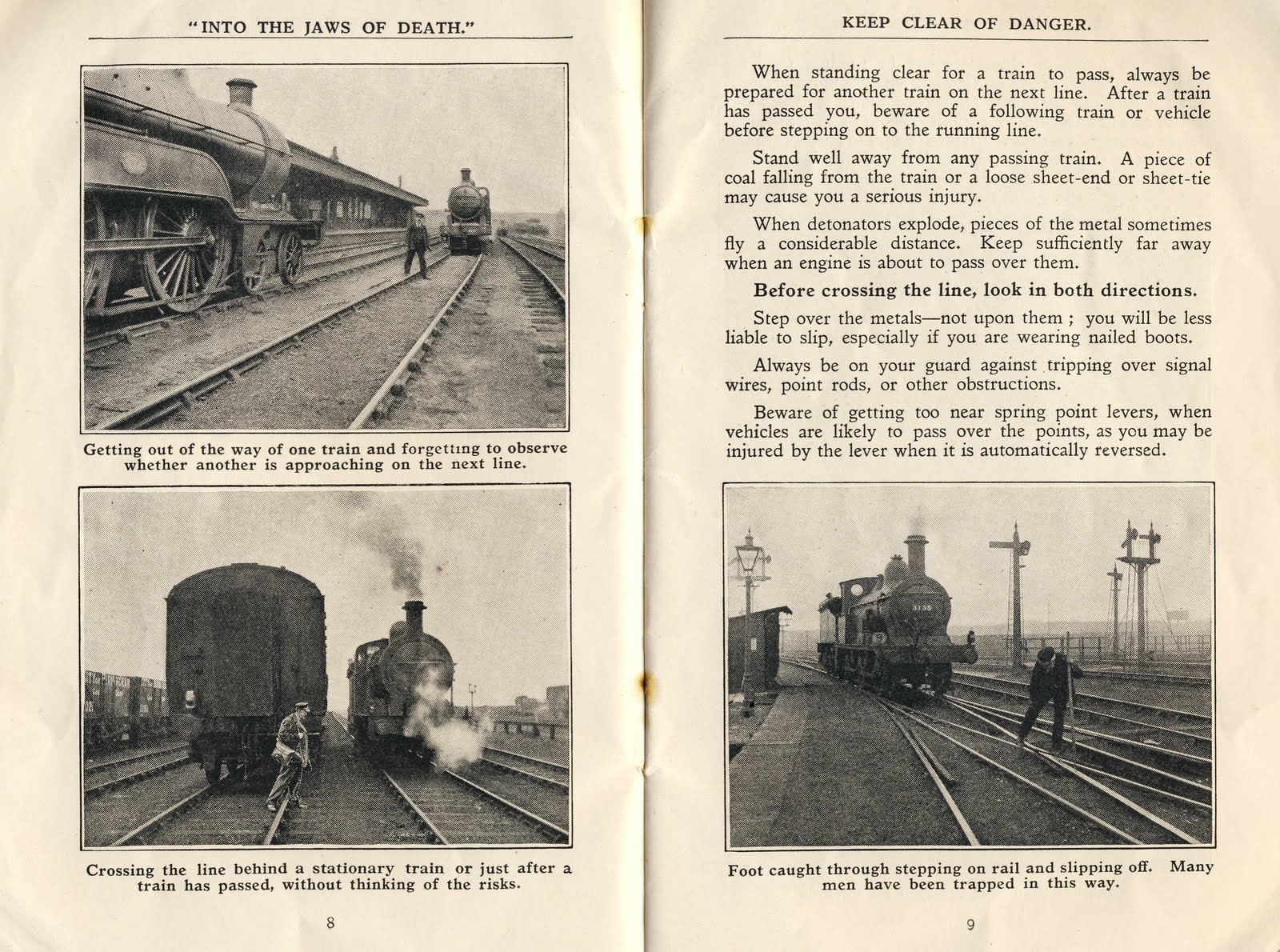 A two-page safety message inside a 1913 issue of Great Western Railway Magazine. Via David Turner. Click to embiggen