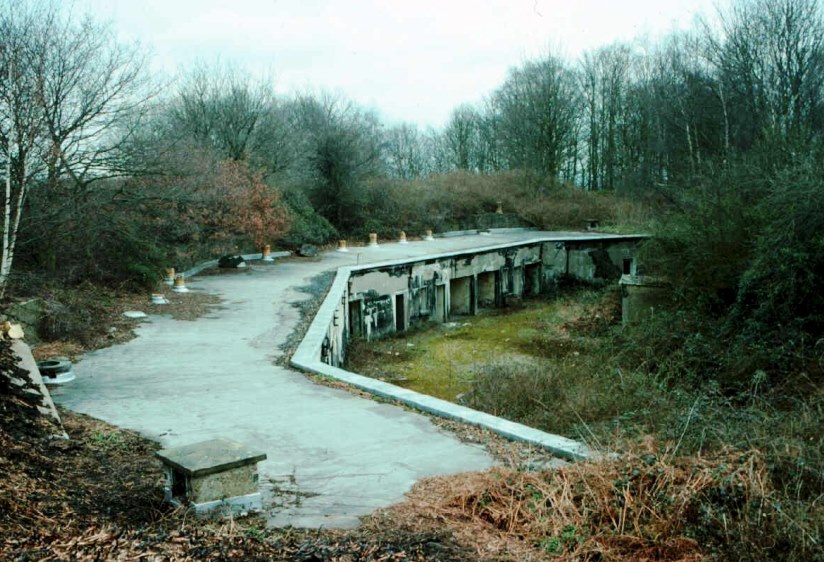 Above: former ammunition bunkers at the North Weald Redoubt, one of the first defensive structures built on the ‘Twydall Profile,’ near London.

In London today, the House of Lords holds a debate on a resolution by Viscount William Peel “That, in the opinion of this House, it is the duty of His Majesty’s Government to exercise a more effective supervision and control of naval and military expenditure.” This anodyne-sounding statement is in fact a political hit on the Asquith government, which has overseen massive public spending increases as a result of the war, and comes in reaction to a series of newspaper stories about fraud, waste, and abuse in contracting, as well as the very recent failure of some tax-raising proposals to pay for the war. Sponsoring the resolution are two veterans of the administration which oversaw the Second Boer War at the turn of the century: Lord William St. John Brodrick, 1st Earl of Midleton, former Secretary of State for War, and Sir Michael Hicks Beach, Earl St. Aldwyn, a Conservative who ran the Exchequer (Treasury). Both men have seen the runaway effect of wartime emergency on the public purse before, and regard today’s motion as a patriotic act.

Standing to speak in support of the resolution is George Clark, 1st Baron Sydenham of Combe, who was secretary of the Colonial Defense Committee more than two decades ago and has impeccable cost-cutting credentials. After seeing Turkish success defending Plevna from the Russians and Romanians for almost six months in 1877 using earthworks and modern rifles, making a personal inspection of the site five years later, Clark was the most important advocate in Britain for instituting the ‘Twydall Profile’ of small, cheap forts with dirt slopes and entrenchment rather than a classic moat-and-wall system, which was more vulnerable to modern high explosives. While the program had a radical effect on the design of new fortresses throughout Europe, the current state of trench warfare has certainly validated his ideas on an unimagined scale.

Departments have undertaken work for which they were distinctly not qualified. The chartering of ships and their economical employment was beyond the capacity of any Department as it was constituted in peace time. If at the outset of war all the great Departments which were to control the expenditure of these vast sums had called to their assistance experts who could have helped them, who would have been ready and willing to help them, much of the expenditure we deplore might have been saved. The noble Duke has said that shipping questions are going to be looked into, and I am certain that economy in that respect can be obtained. But surely that ought to have been done a long time ago, at the very outset of the war. At the War Office everything seems to have been centralized, and wasteful expenditure of all kinds has occurred wholly through a want of guidance. The Reconstitution Committee of 1904 made an earnest effort to decentralize War Office finance. But all those efforts seem to have been swept aside, and the War Office took to giving out immense direct contracts for hutting even when they had experienced officers on the spot who could have advised.

Few men in England better understand the risks created by constructing thousands of temporary buildings for the war (‘hutting’) that inevitably become ugly, semi-permanent structures — a consistent feature of both world wars. In fact, Sydenham-Clark was a prominent member of the Reconstitution Committee of 1904, which recommended reforms at the War Office and the creation of a General Staff in order to fix bureaucratic inefficiencies and modernize the Army. But then he turns his wrath on the unnamed Minister of Munitions, David Lloyd George.

(I)t cannot be an economical Department. In the first place its Head has not a record for economy. In the second place, the salaries and wages it is giving seem to be exorbitant. More than that, I understand that the great spending Departments order what they like from the Munitions Department. If that is so, it means that the expenditure will not fall on their budgets and one inducement to economy will be removed. On the other hand, the Munitions Department itself is placing orders to the extent of hundreds of millions literally, and is not in a position to make the spending Departments show cause—that is, explain whether the orders they give are based upon definite estimates of real requirements or on guesses inspired by the natural wish to have an enormous margin. From the point of economy, the difference between those two points of view must be very great indeed.

But Lloyd George’s massive increases in production of heavy artillery tubes and machine guns will absolutely be vindicated in the course of the conflict. What seems thrift to Sydenham-Clark is actually parsimony, if not sanctimony, for the changes that he helped usher onto the modern battlefield are exactly what make these extreme scales of production necessary for victory. 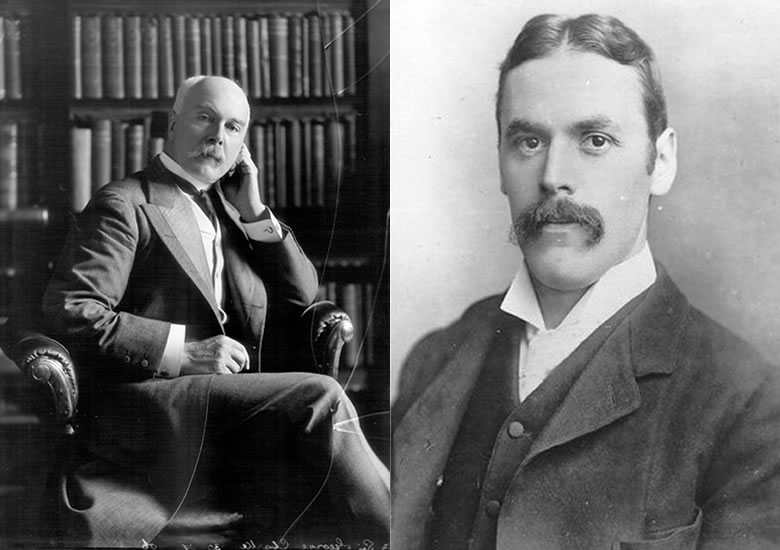 Left: George Clark, 1st Baron Sydenham of Combe. He will leave Liberal politics and end his days promoting fascism. Right: John Phillips, 1st Viscount St. Davids. Both of his sons will be killed in combat during the Great War

William Palmer, 2nd Earl of Selborne rises to answer the critics. Instrumental in the successful formation of the South African Union, he is President of the Board of Agriculture and a Liberal member of the Asquith cabinet. Among other points, Selborne-Palmer explains that military personnel are not accustomed to being bookkeepers, especially in a system where civilians normally control the purse-strings.

(D)uring the greater part of his professional career the naval or military officer acts in a groove out of which he never can emerge, and he seldom or never has any financial responsibility of his own. When war comes men who have never been allowed any kind of discretion in the expenditure of small sums suddenly find themselves in charge of untold sums of money, and with no check upon their expenditure, and they really are incapable of bearing the burden. All these stories one hears of extraordinary extravagance in military administration almost always come down to the incapacity of some individual officer to be the spender of considerable sums of money.

“I do not believe there is a man living who can spend £1,000,000,000, or even half of it, without enormous waste,” Selborne says. Nevertheless, he points to fat-trimming efforts now underway within the War Office and the Ministry of Munitions, then answers a debate proposal to appoint a new board with oversight and discretionary powers over spending in both departments.

Imagine such a Board or Commission, make it of the strongest men; let it be composed, we will say, of the two noble Lords opposite, Lord Midleton and Lord St. Aldwyn. You put them into the War Office to-morrow with this wide and all-important function and with the responsibility of reporting direct to Parliament. Is it conceivable that the time would not come, and come soon, when Lord Kitchener would say to the Cabinet, “There is an authority in my Office which makes it impossible for me to carry out my war policy”? Every one of your Lordships must agree that there would be the gravest danger of such a result.

[…] (W)hen you take a man like Lord Kitchener in a crisis and put him in an Office like the War Office, you must leave him to do his work in his own way. It is not possible to ask such a man to do such a task, and then for his colleagues to be frequently jogging his elbow and asking him to do his work in a manner different from that in which he is doing it.

The critics have cited anecdotal evidence of workers receiving outrageous wage boosts by moving into munitions work, bureaucrats taking immense salaries, and other signs of waste, so Selborne sets them straight.

I speak for my own Department only, but I have no reason to suppose that it is in any degree exceptional. A very large number of men have gone from my Department to the War and to the Munitions Department, and only a small proportion of their places has been filled. Those who remain are doing, as their war contribution, the work of two men. In all respects I have endeavored to put my Department on a war footing, and in so doing I have had the most cordial and loyal support of all my colleagues of every grade.

Earl Peel ends the debate by agreeing to drop the word “more” from the motion, thus striking all criticism from it. But first, John Phillips, 1st Viscount St. Davids rises to admonish the Lords for undermining public confidence in the British treasury — and makes a strikingly prescient argument that public debts simply do not matter in the present circumstances.

It has been said in this House that the country is heading for bankruptcy. That ought not to be said—first, because it is not true; and, secondly, because it would prejudice our attempts to raise money abroad. We have raised money in America and we shall almost certainly have to raise more there. How do you think you can send a representative to America for this purpose if members of this House, noble Lords who ought to have a higher sense of responsibility, get up and say that the country is heading for bankruptcy?

It is quite true, and everybody connected with finance knows it, that the Government may have very great difficulty in raising the sums they require. But that is because our financial system has not been mobilised for war, and before the war is over it will probably need to be mobilised for war. But I want to put an extreme case. Supposing this war were to go on for three years longer and during that period, in addition to what we have borrowed already, we borrowed £4,000,000,000. You would have difficulty in raising it, but you would have no serious difficulty in paying the interest on it; and as long as you can pay the interest there is no chance whatever of your being bankrupt. When we began this war our taxation—I am speaking in round figures for simplicity—was about £200,000,000 a year. When the changes of taxation that are now being carried out are completed we shall be raising nearly £400,000,000 a Year. Does anybody think that this country could not raise an additional £200,000,000, and would not gladly do so, rather than that the country should go bankrupt? That £200,000,000 a year additional taxation which you could raise would pay the interest on £4,000,000,000, and you could carry on the war for three years longer at the same extravagant rate. I say that in the face of those figures, which are undoubted, no member of this House or of the other House ought to get up and say that the country is heading for bankruptcy. The thing is absolutely out of the question.

Indeed, the war will end in exactly three years to the day, and during that time St. Davids will be proven completely correct about American credit and the country’s ability to service the resulting debt. Wars are becoming more expensive ’emergencies’ than ever before in 1915, and the sheer scale of war spending is outstripping the human institutions which might otherwise check the wastage. Generations of technological and doctrinal change have only made war more expensive, removing it even farther from civilian control, while even in ‘peacetime,’ generals and admirals can fritter away sums that make the Lords’ debate seem petty to us now. It is never cheap to erect a ‘war machine,’ or to maintain it in a state of readiness. Even when the products of military spending become obsolete — like, say, Sydenham’s fortresses — we still continue to pay for them. 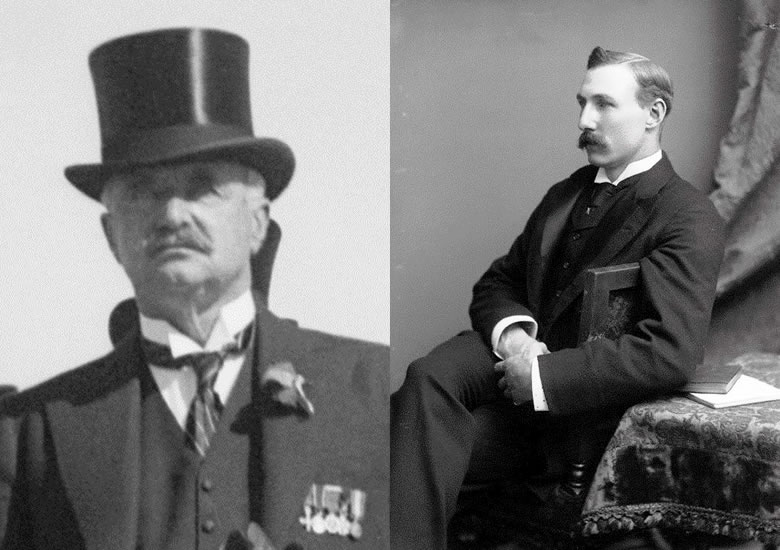