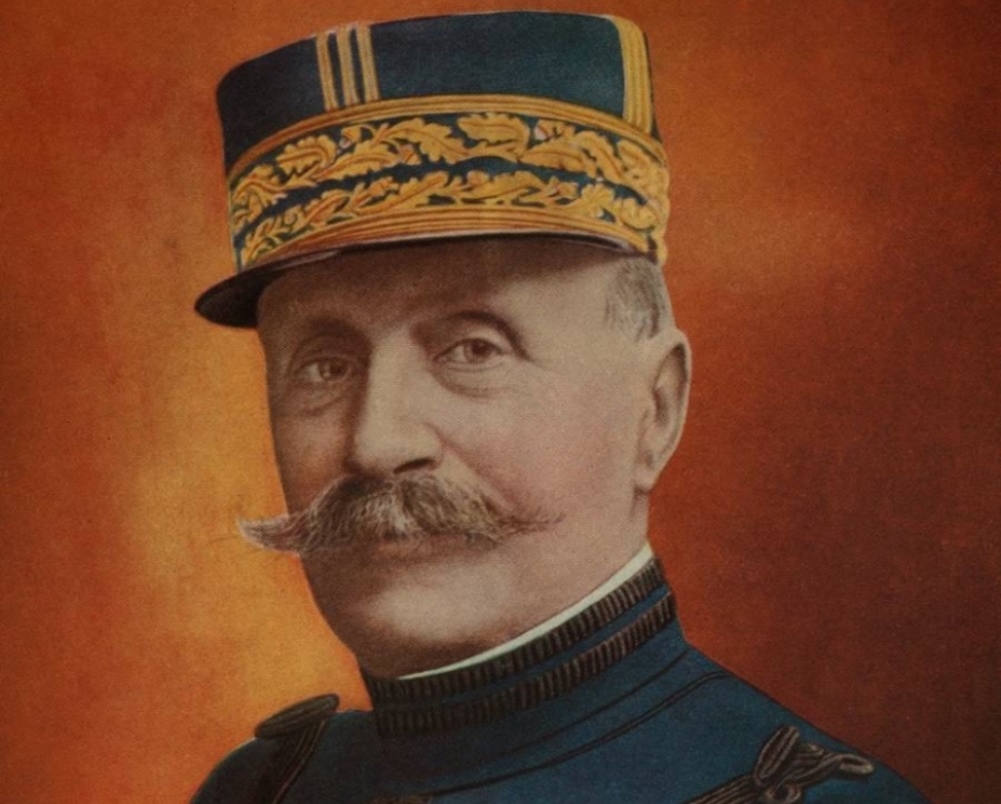 General Ferdinand Foch (above), who has just taken command of the the French Ninth Army, warned the General Staff three years ago that the Kaiser would line up thirty-five divisions flanked by the Channel coast and attack France from the north. Heedless of his warning, French armies attacked along the nation’s frontiers with Germany in the east. They did not detect their enemy’s movement through Belgium, and soon found themselves attacking far superior forces in the north.

Now, after those initial disasters followed by two weeks of fighting and retreat, French troops south of the Marne River have at last been able to stop the ‘grey wave’ in the last two days. Contrary to what the allies tell themselves in their gilded histories, at this point long marches and hot weather have slowed the Imperial German Army’s advance at least as much as anyone’s armed resistance has, and probably more.

Today in the north of France, the fortress at Maubeuge surrenders after a 12-day siege under the most powerful guns on the planet; it will not be retaken until nearly the end of the war. The German army has swept around such obstacles here and in Belgium, reducing them by siege while the bulk of its armies bypass such strong points and continue towards other objectives. 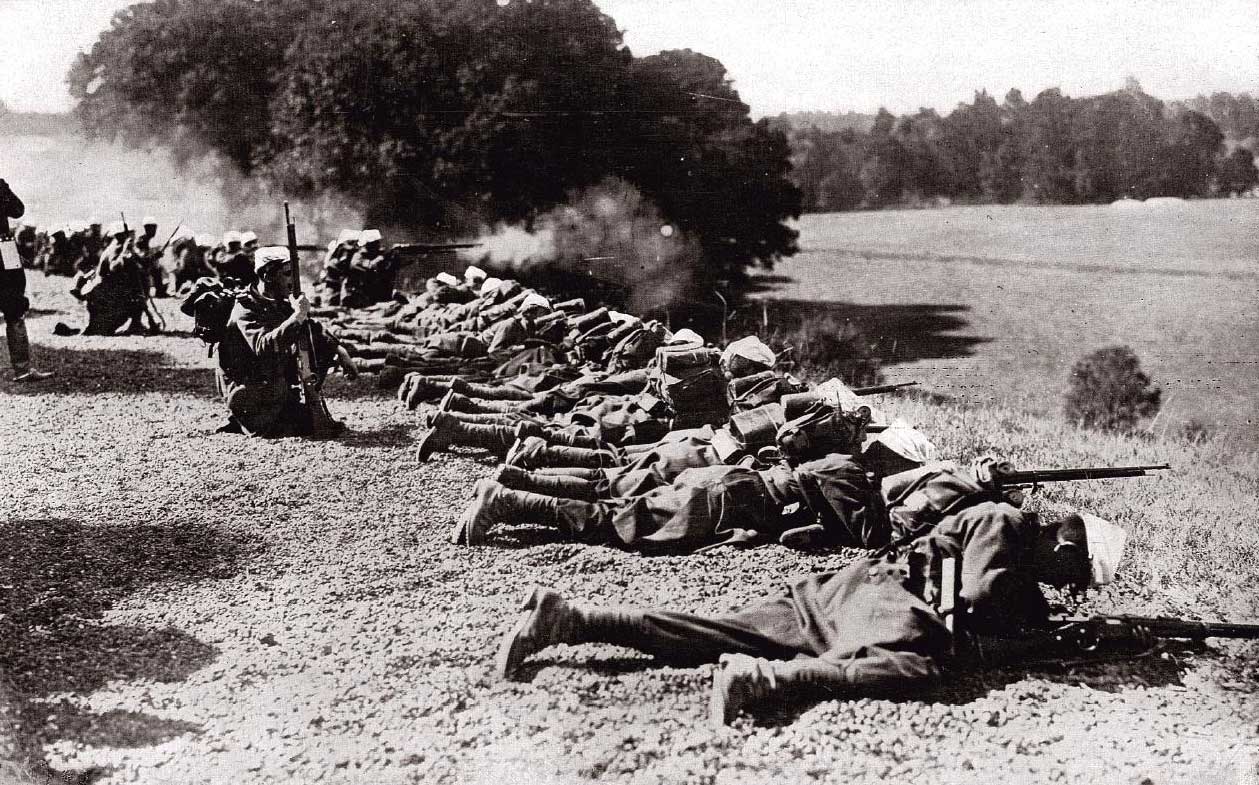 A French front line at the Marne. Despite a culture of contempt for enemy fire, soldiers are already learning to stay low and fight from cover and concealment instead of standing up to get killed

This is the picture of German operational art at the time, a bottom-up style of leadership putting great reliance on the best efforts of generals. We call this style ‘leadership by reconnaissance.’ General Alexander von Kluck has only had intermittent contact with Helmuth von Moltke while pursuing the mass of the French army that his airplanes have spotted retreating south. He has largely ignored reports of movement to his right, but in the last two days Kluck has changed direction again to meet this threat, opening a gap between his First Army and the Second Army. This is a level of individual discretion that other armies do not emulate.

German troops are at the extreme end of the logistical range at which they can be deployed in hostile territory. Their artillery is expending as much ammunition in each day of this battle as they did during the entire previous war with France, which is similarly exhausting its supply of 75mm shells much faster than its industrial base is able to replenish. But at least her factories are close to the battlefront, whereas every mile the German army has penetrated into France is another mile that ammunition must travel.

Yet even though the vast French Army is sitting in its own territory, some units have not been fed in two days. The Kaiser’s field kitchens and supply wagons now depend on what they can capture as they march, and many Germans are hungry, too. Like many of his men, General Max Hausen, the commander of Germany’s Third Army, is sick with typhus. 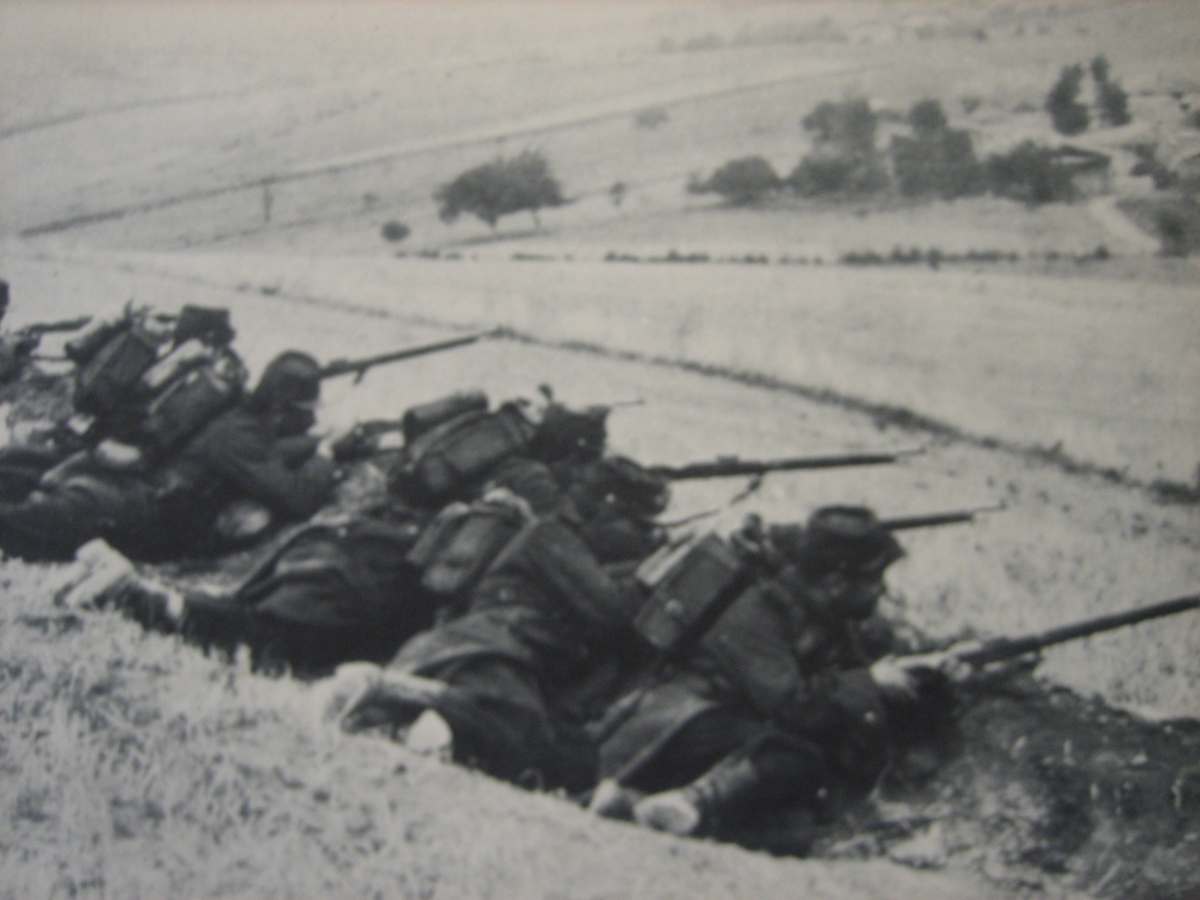 Another front line at the Marne. Note that these French soldiers appear to have found or captured a fresh scrape for their firing line and are not too proud to take advantage of it

The war might end here, and in fact allied pilots see the thirty-mile gap that has opened up between Kluck’s army and Karl von Bülow’s. But Field Marshall Sir John French of the British Expeditionary Force is too cautious to exploit it. In fact, his troops are already more than ten miles behind their objectives today, moving forward only with sullen caution. As General Foch might say, Field Marshall French lacks the will to attack.

From his forward headquarters in Luxembourg, Helmuth von Moltke dispatched Lt. Colonel Richard Hentsch to the front yesterday with an extraordinary amount of delegated authority. Upon seeing the gap that has appeared between the armies today, Hentsch conveys Moltke’s mandate as an order to give ground and reunite them near Reims. Bülow readily assents; he is an old man, far from home and just as exhausted as his army. As General Foch might say, he has lost his will.

Foch knows all about the power of the will and its importance in battle. He has been an instructor at the Staff College, and his two books The Principles of War and The Conduct of War have already introduced a generation of French officers to the idea that wars can only be won through offensive action by armies whose generals push them forward. Known to us as ‘command push,’ this style of military command is distinctive from ‘leadership by reconnaissance’ in that it is driven by goals and objectives decided at the top of the chain of command, rather than pulled along by commanders at the bottom who find and exploit weaknesses.

A map showing the situation tomorrow morning after a two-day counterattack by the allies. The Germans are retreating in good order to the Aisne, where the war of entrenchment will begin

We may point to Sir John French failing to push his army into the gap as an example of command failure, but French soldiers, especially officers, refuse to dig in or entrench themselves today, too. The all-too predictable result is a high death rate among senior officers and staff who simply will not take cover under fire. Within a week, Ferdinand Foch will be pushing his own command to do the unthinkable and use shovels. It is not to be an easy transition.

The Germans have no problem digging and fighting from entrenchments; in fact, it is a key part of their defensive doctrine. Foch’s troops advance tomorrow to find many prepared positions evacuated by Kluck’s army on his withdrawal to the Aisne, where pioneer battalions are already digging the first part of what will come to be known as the Western Front.

Two styles of command have clashed, and although today is reckoned a victory for France, neither command style has in fact won the rapid war of movement that either general staff envisioned. Instead, the war is about to become a stalemate in which no command style can prevail over the advantages enjoyed by defenders using the weapons of 1914.