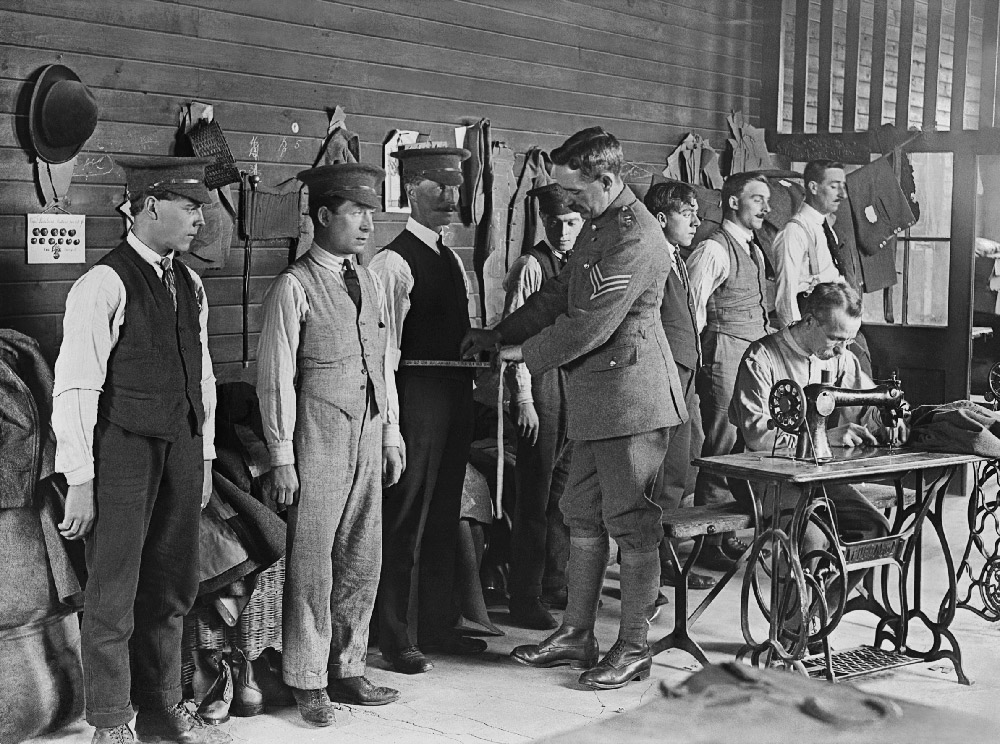 Above: British conscripts have their uniforms fitted in 1917.

No man in Great Britain understands the challenges of recruiting, uniforming, training, arming, equipping, mobilizing, and motivating mass numbers of men better than Lord Horatio Kitchener, who offered his resignation to King George V yesterday in a pessimistic gloom. “I told him of course that I wouldn’t allow him to do such a thing & that I had every confidence in him,” the King records in his diary. But Kitchener’s mood is not misplaced: Gallipoli is a quagmire, the latest British offensive at Loos is a bloody failure, and Bulgaria is swinging over to the enemy to help the Central Powers crush Serbia. Most worrying of all, volunteer enlistments have been down since the summer, and Kitchener is already feeling the shortfall. October will see him grow increasingly worried by the quality of the 39th, 40th, and 41st Divisions due for the front in November; most of their battalions are undermanned, and the formations have been filled out with ‘Bantams’ — recruits under five feet three inches tall.

Clearly, the peacetime doctrine of all-volunteer army will no longer work for Britain. Three million men are already under arms, nearly exhausting the available pool of able-bodied, fighting-age males who are willing to volunteer. The word on everyone’s lips these days is ‘conscription,’ a word that bears cultural burdens in England that do not exist in France or Germany, where for decades, most young men have been inducted as a matter of course, and subject to recall in time of war. According to the British government’s wartime census conducted this August, 3.5 million British males remain at their civilian occupations rather than take up arms; by hook or by crook, they must be turned out for the war if Britain is to avoid defeat. 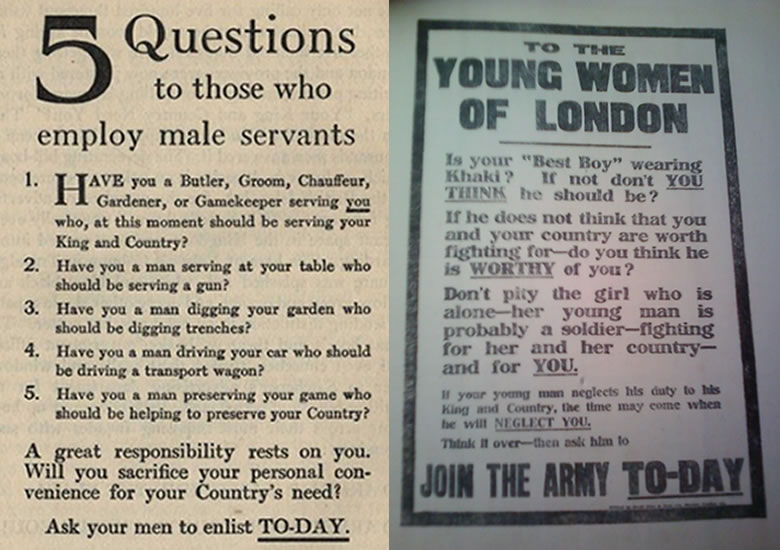 In spite of declining enlistments and growing acceptance of the need for involuntary enlistments, deep resistance to conscription continues across all sectors of British society and politics. Kitchener, for one, worries that the issue will divide the nation so sharply and completely as to lose the war altogether. Today, Labour MP Arthur Henderson brings together a coalition of trade union organizers and members of his party to pledge the support of the working class to the war effort; like Kitchener, he is trying to avoid the final resort of drafting men against their will. Meeting at the Board of Education in London, one unnamed participant declares that today’s discussion has “knocked the stuffing” our of conscription, and that worker representatives can produce a surge in enlistments by passing out literature at shop meetings.

We have been taken into the Government’s confidence, and now we are going to have a raging, tearing propaganda for bringing in recruits. We shall pledge ourselves as well as the labor organizations of the country to utilize all our influence to stimulate recruiting. and we believe we shall not fail.

Nor is Kitchener leaving this challenge up to others: on the 11th, he asks his friend Edward Stanley, Lord Derby to take over as Director-General of Recruiting. Already a successful recruiter, five days later Lord Derby presents the Asquith government with a last-ditch plan to avoid conscription by requiring all males between 18 and 41 years of age to register and declare whether they intend to serve if called. Trying to encourage compliance, Prime Minister Asquith declares that single men will go before married men, and the entire plan depends on rigorous data management decades before the invention of computers. Derby’s scheme is therefore demanding and resource-intensive, requiring local Parliamentary Recruiting Committees to canvas the country for men who can be exhorted or cajoled into doing their ‘patriotic duty’ without guaranteeing a favorable outcome. 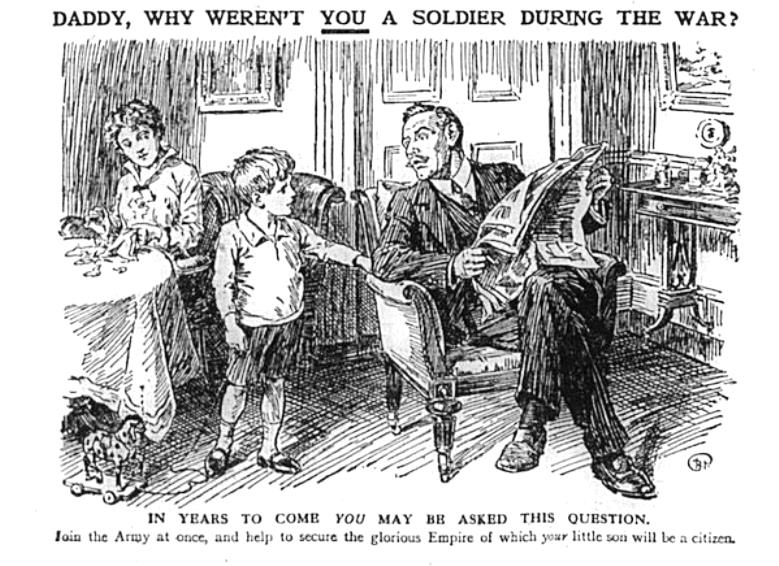 During the Great War, the term ‘last ditch’ comes into vogue as a way of saying that all efforts have been exhausted; the Derby plan is a last-ditch effort to avoid mass conscription, but it has the best men in the country to conduct ‘a raging, tearing propaganda.’ Hedley Le Bas is the director of the Caxton Publishing Company and a true pioneer of public relations: first to run a full page ad in the Daily Mail, in 1916 he will also become the first ad man ever knighted. It is a reward for his services in support of the volunteer army, for Le Bas has always opposed conscription. Le Bas was first hired by the War Office in 1913 during a previous ebb in recruitment, but with the coming of war he has mobilized mass-media in ways never seen before. One of his artists, a man named Alfred Leete, drew Kitchener pointing from the September 1914 front cover of London Opinion magazine; that image has already become the best-known recruiting poster of the Great War — and remains one of the conflict’s most recognizable icons even today. Newsman Alfred Harmsworth, a cheerleader for conscription, nevertheless pledges the full support of his papers to build enthusiasm for the ‘Group Plan,’ as Derby calls it.

But they are not enough. Derby’s scheme is too complex; too many of those who do agree to serve still defer their enlistments, while too many more still refuse to sign up. By the beginning of the new year, it will be all too clear to everyone in Britain that no amount of prodding or propaganda can raise the number of men needed to raise the new divisions needed in France. Meanwhile, Australia is holding a parallel debate on conscription, and the Empire is already beginning to do the unthinkable: on the 26th of this month, colonial authorities swallow their fear of black soldiers and raise a new West Indies Regiment that will one day serve on the Western Front. Perhaps we should not be surprised at Kitchener’s despair, for in his eyes, the ‘bottom of the barrel’ has been reached. 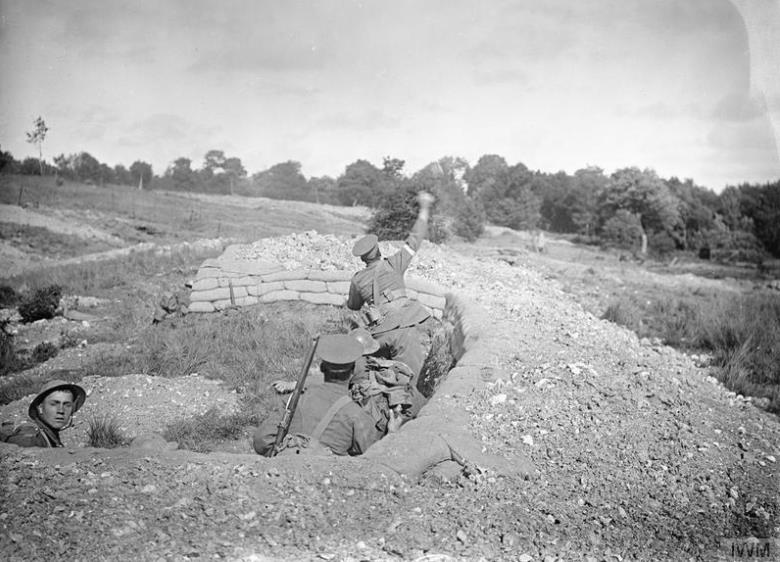 British soldiers learn to throw grenades in 1916. Every man at the front had a helmet by this point, but military training units always experience a lag as uniforms, weapons, equipment, and training doctrine are updated