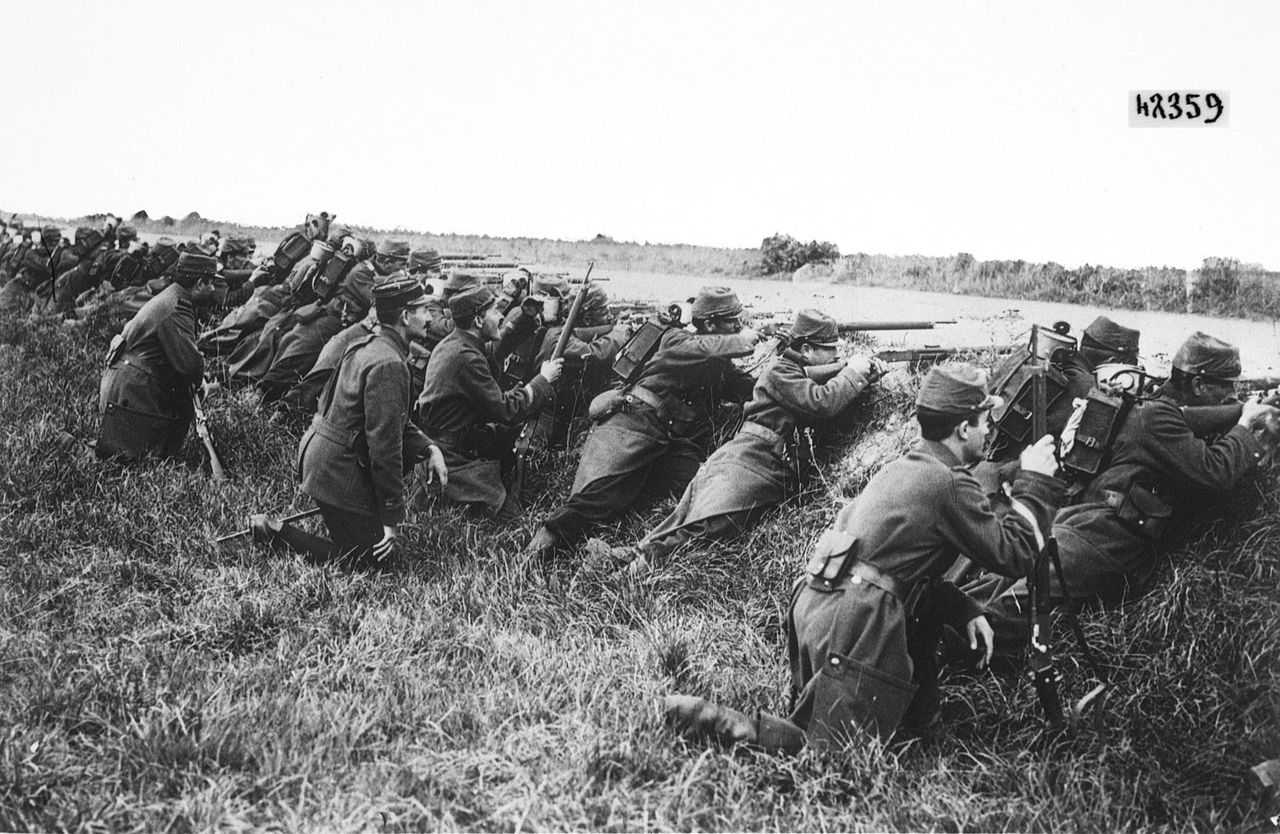 The last weeks have been a disaster for France. Encounter battles with the Imperial German Army in the north have already killed more Frenchmen in three days of battle than the Gallic nation will experience in any other offensive of the war, and in fact it was their emphasis on offensive action against machine guns and artillery that led to disaster. The result was a great retreat over twelve days, but yesterday French forces assumed new positions along the Marne River — and today, as the German ‘grey wave’ reaches its furthest advance of the war, the boot is on the other foot.

So far, battles on both Eastern and Western fronts have followed a format that Napoleon would have recognized, with long lines of men forming up to blast each other to bits. The differences are that in the last 99 years since Waterloo, rapid-firing rifles, smokeless gunpowder, and high explosives have replaced far less-accurate and shorter-ranged muskets and smooth bore brass cannon — and the armies are orders of magnitude larger, thanks to rapid population growth and universal conscription in France and Germany.

The month of August was largely defined by German artillery success: accurate, fast-paced shellfire — especially indirect fire at targets that the gunners cannot actually see — has not only out-ranged and decimated the allies, but heretofore unimaginably-powerful guns have reduced the strongest fortifications to rubble. Yet today belongs to a French gun, one that is merely 75 millimeters in caliber. It is both a marvel of engineering and a story of government secrecy. 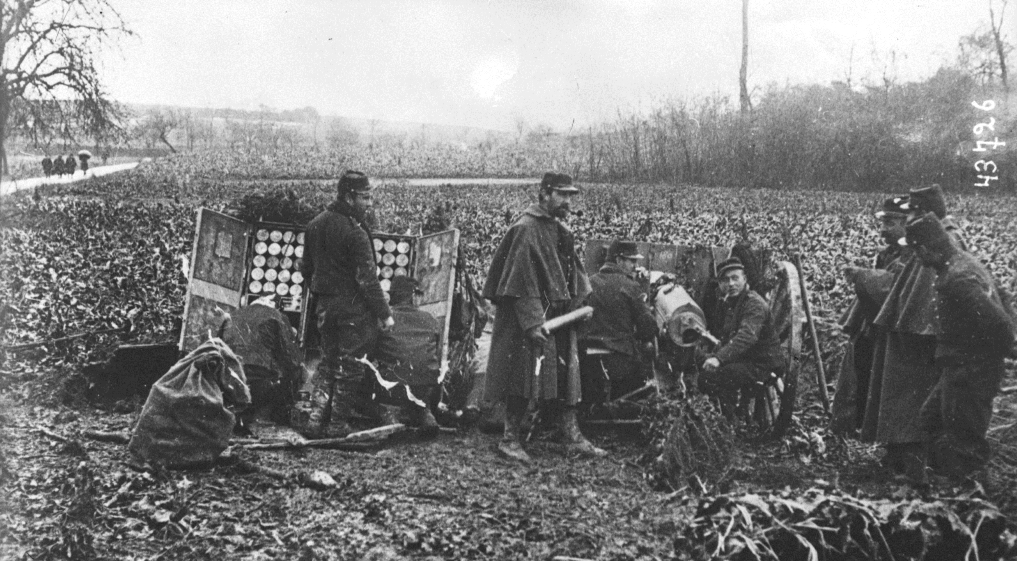 A French 75mm gun crew in action. Note the caisson designed to allow for rapid-firing of up to 72 rounds. The NCO at right appears to be preparing to time the crew’s salvo with a stopwatch

In 1871, France had been outclassed and embarrassed by German field artillery. A classic example of military procurement answering the pressing needs of the previous war instead of the future one, the French 75 is the result of a five-year development program conducted in the black. Its operating funds were officially earmarked to buy property near Paris, and production of the various components was scattered around the country, with only a few persons knowing how all the pieces fit together. Everyone in the supply chain is subject to scrutiny and observation, and potential leaks are firmly plugged.

It is a model for future secret weapon development programs — a Manhattan project for field artillery.

The secret within la bonne Madamoiselle Soixainte-quinze is the revolutionary recoil mechanism. It solves a basic problem of firing cannons both fast and accurately. Until now, rapid-firing artillery has meant scattered, less-effective fire as the recoil of each shot shifts the weapon’s aim. Using a recuperator mechanism handmade to zero tolerances by skilled craftsmen, the 75 remains tightly on-target no matter how many times a crew fires it. The mechanism is so secret that crews are strictly forbidden to field-strip that portion of the gun.

All the armies engaged in this conflict understand how to build similar guns, but none with such precision as the 75. Against massed men in the open field, la Madamoiselle can produce terrific slaughter — which is what happens today, when the German army attacks at the Marne.

So far, the war has also been a horse-drawn affair; the Guns of August have not propelled themselves. Millions of horses are fighting and dying along with these men, and railroads are already a factor in war, but the infantry of 1914 is mostly still getting around on foot as their most ancient predecessors did.

Mobilized reinforcements are arriving near Paris today and desperately needed at the battlefront, but the railroads are already full to capacity. General Joseph-Simon Gallieni, the Military Governor of Paris, decides to requisition the city’s  taxis. Tonight, the first 150 Renault AG1s leave the Esplanade des Invalides on their way to the assembly area. Joined a few hours later by the rest of the city’s taxi fleet — as well as a large number of buses, racecars, trucks, and even luxury vehicles — the convoy is dispatched at 4 am to pick up the 103rd and 104th Regiments and transport them directly to the front, with most vehicles making at least two trips.

That is a small number of men, given that the Battle of the Marne involves 2.5 million soldiers, but it is still the first time that motor transport has been used to deploy a unit to battle. Although it will still take decades to fully replace the horse as the primary means of military logistics and transportation (indeed, the German divisions of 1941 are almost as dependent on biological horsepower as the armies of 1914), the Western Front will see the first widespread use of motor vehicles to support armies in the field. It is also the beginning of a close national relationship between governments and automobile makers…but that is another story. 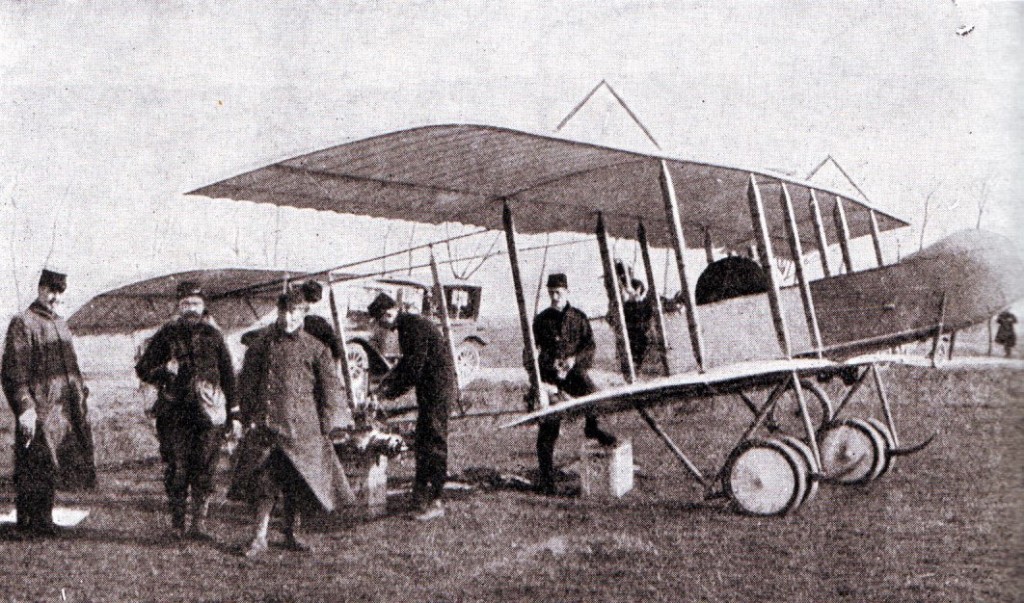 Under repair during the Battle of the Marne, this appears to be a modified Vickers F.B.5 with a ‘push’ propeller

This is also the first battle of the war in which aerial reconnaissance makes an important difference to the outcome. Pilots discern a gap between the Kaiser’s First and Second Armies, allowing the allies to drive a wedge between them and threaten the superior German army with encirclement and destruction. On the third day of heavy losses, General Helmuth von Moltke orders a general retreat to the Aisne — where his armies are to dig in and reorganize before attacking again. Allied pilots then also spot the German retreat, allowing the allies to pursue their foe and attack.

The reckoning today is not about the military technologies that various powers have developed before the opening of the war so much as their cumulative effect. To attack a prepared defender in the open in 1914 is suicide; to attack such an opponent shoulder to shoulder, while crossing obstacles such as a few strands of barbed wire, is mass-suicide.

Unlike Waterloo, these armies are armed with rifles that can hit faraway targets and artillery that can quickly destroy entire cadres of soldiers. Their commanders are able to see beyond the horizon and bring reinforcements to battle by road and rail. The war so far has featured lots of bloody battles and long marches, but prepared defenders have had the advantage in every engagement, and reinforcements have tended to become cannon-fodder in a hellish landscape of flying metal bits.

Britain is already building a new national mythology from its one-day success at Mons, where His Majesty’s volunteers fought from incomplete and hasty cover. The French disasters along her frontiers with Germany and Belgium have all been offensives of her own design. Germany has suffered her only setbacks so far while on the attack, and won her greatest victories in the east while on the defensive. Even ‘brave little Belgium‘ has proven capable of checking German advances with modern weapons.

The war of annihilation simply favors the prepared defender. All of these powers accepted that the price of war would be terrible, but all of them began the war on the offensive expecting to get the grisly business finished quickly. None of them have succeeded, and that is because their new technologies prevent the other side from doing the same.