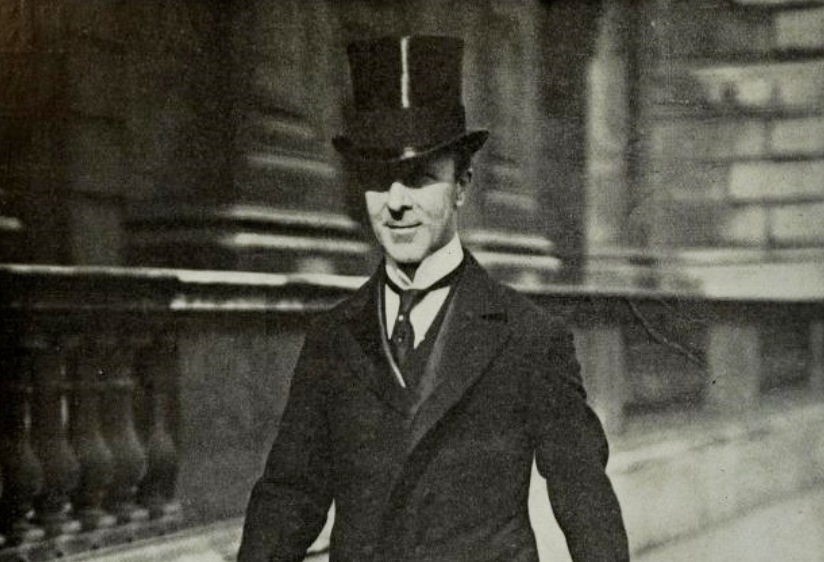 Seen above, Reginald McKenna was a banker long before he was a Liberal MP, so his world is ruled by math, not ideology. Personally conservative, he is uninterested in partisan questions, a technocrat of finance rather than an orator. McKenna’s elevation to Chancellor of the Exchequer was part of the Prime Minister’s cabinet shakeup in May, when he replaced David Lloyd George, who has taken over the new Munitions Office. As he stands before Parliament today, McKenna announces that his esteemed predecessor has underestimated the costs of war by at least £115 million.

During the fiscal year to come, McKenna expects the British Army alone will cost £715 million, with the Navy costing an additional £190 million. Imperial support for dominions and allies will incur another £423 million in expenses. Wartime payments for food supplies, spending, and debt service add up to £92 million over and above ordinary domestic expenses of £170 million, for a total of £1.59 billion in McKenna’s anticipated budget. Against this red ink, the crown can expect to receipt £272 million in regular taxes, an additional £31 million in the wartime taxes that have already been passed, about £2 million from a scheduled hike in postal rates.

Without new income streams, Great Britain will have to borrow £1.3 billion to cover the deficit; by March of 1916, McKenna says, the empire will carry £2.2 billion of public debt. Yet McKenna leaves his chief anxiety unspoken. Much of the wartime trade deficit takes the form of United States exports, and in order to finance the war British banks in New York float more war bond issues, with the net effect of transmitting the empire’s wealth from London to America at a steady rate. McKenna fears the transfer of Britain’s global financial supremacy across the Atlantic will be permanent, and history will prove him right. By the end of the war, McKenna will have returned to private banking as the baton of global capitalism passes forever. 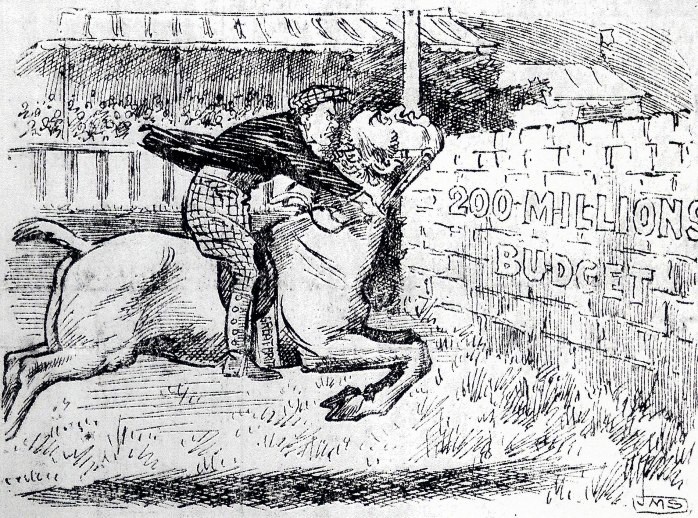 Nor is the American president seemingly in any hurry to enroll his country in the Entente military alliance against the Central Powers. From the American side of the water, the current state of affairs is even better than ‘acceptable,’ powering a recovery from the economic devastation of the war’s opening months. Having suffered what remains its longest trading outage ever, Wall Street is exuberant with British cash, and American bankers are only too happy to receive British gold. Despite the war of words with Germany over submarine sinkings, Washington is merely practicing a policy of diplomatic drift with Potsdam; President Wilson makes no call to arms, no provocative speeches, and no mobilizations.

Quite simply, war is not in the American interest, but war credits have plenty of interest in America.

To help forestall this fateful decline in the British Empire’s global standing, the Chancellor of the Exchequer proposes a series of new taxes collectively known as ‘the McKenna Duties.’ Intended as a temporary wartime measure, most of this revenue package will instead last more than four decades. It consists of a 40% income tax increase that is effected both by lowering the bar on exemption of the poorest citizens and by raising the ‘supertax’ on the highest incomes. McKenna includes a 50% tax on war profits, a 50% excise tax on imports of tea, tobacco, cocoa, coffee, and chicory, with 100% rates on motor fuel. New ad valorem ‘luxury taxes’ on imported manufactured goods, such as automobiles, film reels, clocks, and hats, accompany further increases in postal, telephone, and telegraph rates.

But whereas he is happy to conscript retailers and the incomes of private citizens to the war effort, Reginald McKenna has staunchly opposed central planning efforts (‘industrial conscription’) to resolve the munitions crisis in the past, standing instead on laissez faire principles. He also opposes military conscription, a policy stance that inflames McKenna’s rivalry with David Lloyd George. Uninterested in developing his personal popularity, McKenna lacks the political acumen necessary to take and hold positions of power, a financier among statesmen. 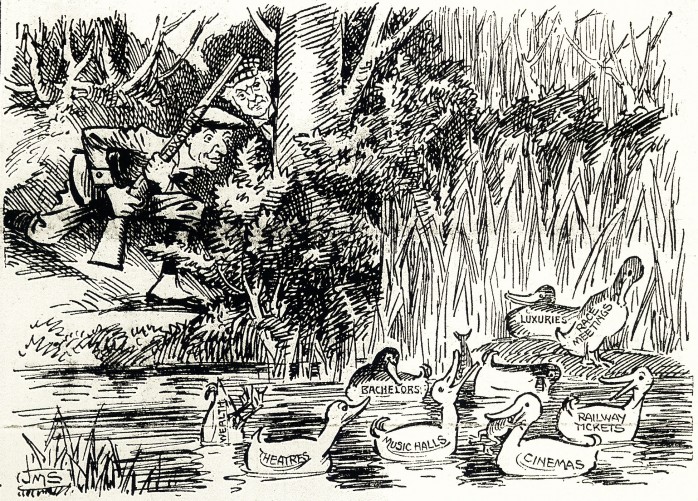 A February, 1916 Staniforth cartoon of Prime Minister Asquith as gamekeeper, regarding further wartime tax ideas: ‘They look fat enough, McKenna; but whichever you hit there’ll be an awful row.’ Via cartoonww1.org