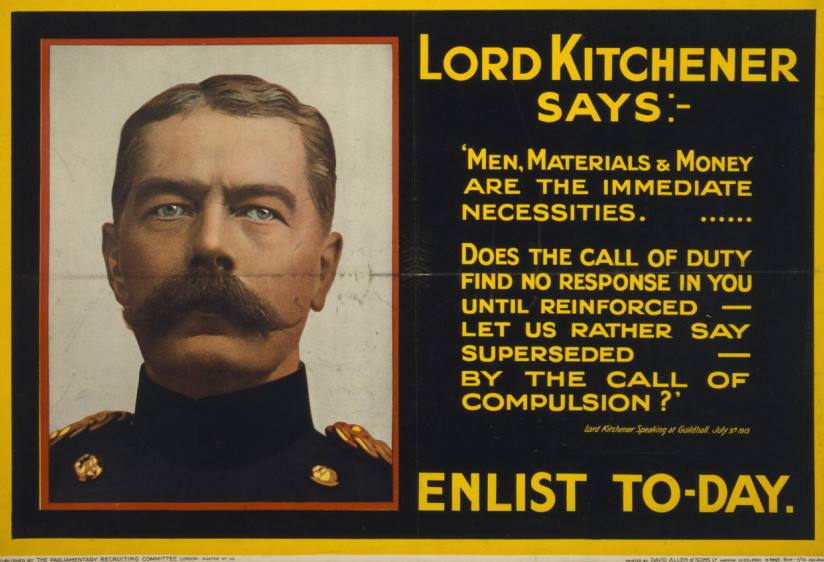 Parliament returned yesterday to inaugurate its new session, meeting three days a week to continue Britain’s elected government in wartime. The Western Front remains a deadlock in its fourteenth month, and Great Britain is mired in a strategic fiasco at Gallipoli while the balance of power in the Balkans shifts, and if the optimism which pervaded London in January has not fully evaporated, Prime Minister Herbert Henry Asquith’s non-triumphal speech before the House of Commons ought to dispel any notions of being near to victory. Instead, Asquith makes a sober accounting of the empire’s massive new war debts.

Do not let it be said by our children and our children’s children that in the gravest moment in our history our arm was shorn of its strength by any failure on the part either of rulers or ruled to concentrate upon an unexampled task consentient counsels, undivided energy, [and the] unbroken and indomitable will of the British people.

His wife Margot thinks it “a magnificent appeal for unity: simple, pathetic, and restrained. It made a profound impression on the House,” and then crosses over to the House of Lords, where Lord Henry Horatio Kitchener is also giving a speech today on the human war debts that are being underwritten by the United Kingdom of Great Britain. Margot Asquith finds the national hero “a bad speaker and writer, (who) can’t read his speeches at all well.” Meanwhile, her husband successfully moves to extend a new war credit to November 15th, thus adding £250 million to the imperial war debt.

Now totaling £1,262,000,000, the largest war debt ever seen is being incurred at a time of sharply-lower exports; during 1915, British trade will be down to £385 million from £525 million in 1913. With Britain importing war material and munitions as fast as possible, a deficit is forming, and meanwhile the daily costs of war are still rising. During the period from July 18th to September 11th, that figure reached £5 million a day; over the same period, the British government repaid £50 million in interest to the Bank of England, £28 million to their imperial dominions for wartime services, distributed £250 million in aid to fellow belligerents, and added £30 million for other foreign governments within the British sphere of influence, such as Greece.

Since his last speech, Kitchener says, eleven new infantry divisions have been sent to France, adding seventeen miles of front to the British line for a total of 51, thus slightly relieving the allied French Army. Almost 700,000 troops now serve in France, backed by a vast production increase in heavy guns. Some 715 factories across Britain, powered by 800,000 workers, churn out weapons and equipment for the war seven days a week. There are twenty shell production centers operating, with another 18 under construction. Yet Lord Kitchener has had very little to do with these successes; in fact, he has been more hindrance than help in making them happen. 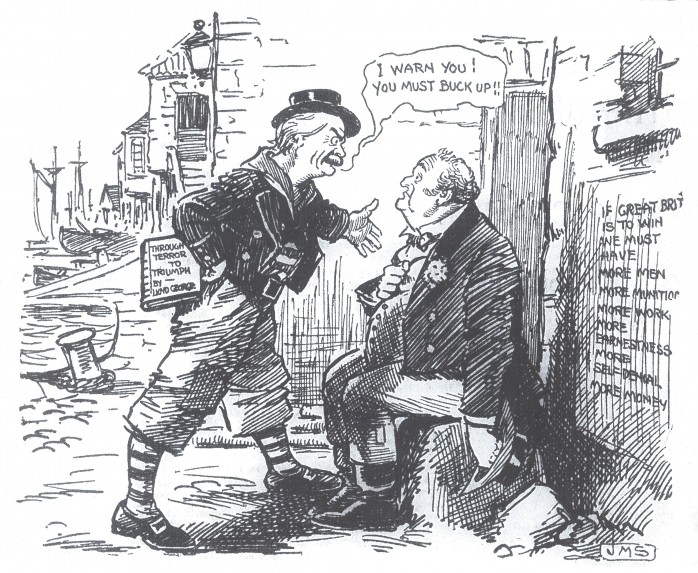 In today’s Western Mail: Minister of Munitions David Lloyd George impresses John Bull with the need to “buck up”

Before he finishes, Lord Kitchener expresses anxiety about a fall-off in recruiting. Having enlisted some 125,000 men per month, totaling about 2,250,000 in the first year, the number of volunteers has fallen off since mid-June. Some 380,000 British men have been killed, wounded, or captured in the conflict, but surprisingly, these stunning casualty lists are not the primary impediment to improved enlistment.

Rather, the existing pool of willing recruits who feel free to leave behind family and home has simply been tapped beyond its peak, and the Asquith government has long accepted the stark choice between sending a man overseas or having him work on a critical assembly line. Adding the Navy and other forces, the Prime Minister estimates today that close to three million British men and women are already in uniform out of a total population of forty-six million. Altogether, about 3.5 million able-bodied British males are available for service without jeopardizing national imperatives on the factory floor, but have not enlisted, and their reasons are as personal and diverse as we might expect: many are primary breadwinners for their families, or own businesses with dependent employees, or have other understandable obligations.

The word on many lips, then, is ‘conscription,’ but neither Kitchener nor Asquith addresses the issue in their remarks today. Having conducted a national census partly in order to lay the groundwork for an eventual draft, the Liberal Party is still divided over the issue. Newsman Alfred Harmsworth has organized politicians and leaders around the idea, but the British labor movement is steadfastly opposed to any scheme which includes the factories, as they fear the diluting effects of any industrial conscription regime on worker rights and wages. Labour MP and railroad union leader James Henry Thomas speaks for many tomorrow when he warns: “The first day this principle was introduced the government would have to deal, not with compulsory service, but perhaps unfortunately with industrial revolution.”

It is ten days before the British Army undertakes their largest offensive of the year at Loos, incurring another depressing list of casualties. Resistance leads to Lord Derby’s last-ditch effort to maintain the Army through voluntary enlistment. On October 11th, Lord Derby is appointed Director-General of Recruiting with a mandate to make one last attempt at raising voluntary enlistments, but by the beginning of 1916 it will be painfully clear that he has failed. 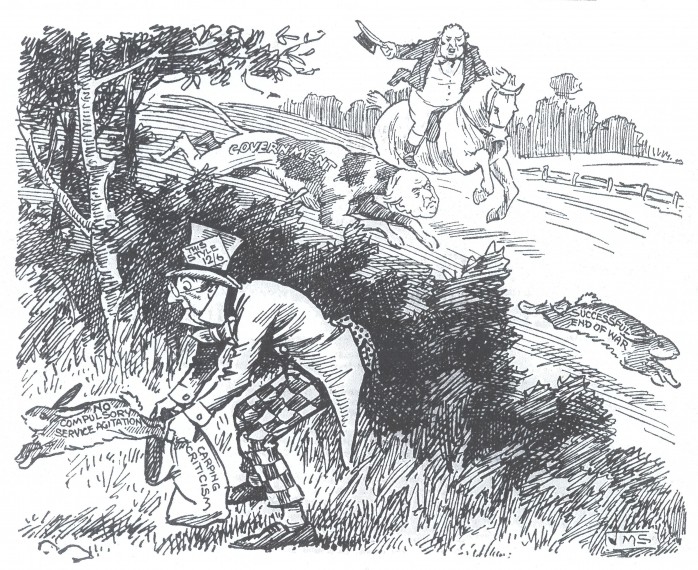 In this cartoon in tomorrow’s Western Mail, James Morewood Staniforth uses John Bull on the hunt, with Asquith as a hunting dog, and the Mad Hatter as a war critic distracting them with his objections to conscription