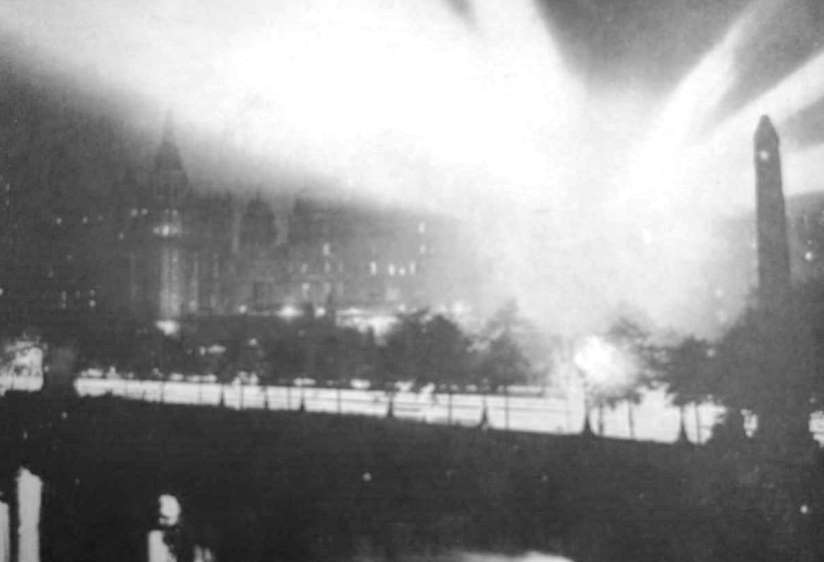 The German Army’s airships have been eager to keep up with their Navy colleagues in bombing London, and last night Hauptmann Alfred Horn took the LZ.77 aloft to do just that. Just two weeks after their airship was commissioned, this is his crew’s second attempt to strike the British capital, with the first four nights ago being a failure when his bombs landed in the Suffolk countryside, doing no damage.

They had no better luck this time. Spotted crossing the coast near the mouth of the Thames Estuary, they first took fire from the ground minutes later; approaching the blacked-out city, Horn parked his aircraft about one mile north of Epping Station and dropped flares. Seeing the tents of a divisional field artillery brigade below him, Horn drops his entire load of bombs, but his excited men forget to remove the safety pins, and they fail to explode.

Confused and contradictory reports nevertheless create chaos. Breathless lookouts see LZ.77 as two airships, and multiple sightings are mistaken for multiple waves. Woolwich Arsenal, where the all-important work of supplying men at the front with ammunition and equipment, has lost two hours of work to the blackout. Trains have been delayed until almost 3 AM to give the German airmen no easy guide to the heart of the city. Troops have been mobilized in response to the raid, perversely spreading alarm and anxiety among the people of London. Realistically, airships represent a tiny threat; the true damage is psychological.

That lesson is driven home again tonight by a pair of raids along the coasts of Kent and Essex, both of which also fail to kill anyone or do real damage while nevertheless scaring the living daylights out of everybody. Something must surely be done, so it is a lucky thing that Sir Percy Scott accepts his new assignment today as commander of the new London Air Defense Area (LADA). 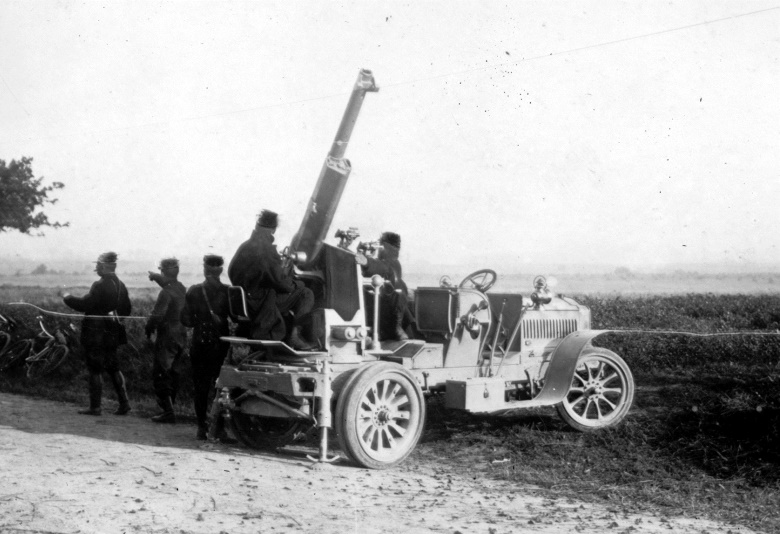 Protecting Paris: a French 75 mm field gun mounted on a motorcar and used to good effect as air defense artillery

Tapped for the job by the new First Lord of the Admiralty Arthur James Balfour because Winston Churchill had brought it under the purview of the office during his tenure, on Scott’s first day tomorrow he confirms Balfour’s warning that “the means of defence at that time were very inadequate.” Very little has been done so far to protect London. There is no cadre of night-flying pilots, and even aloft the British hunters are not armed with bullets that can bring down an airship. There are just eighteen cannons positioned around London, and most of them are too low-powered to reach targets at altitude, and they lack high explosive shells and fuses suitable for the job of shooting into the sky. The available ammunition, Scott writes, was

more dangerous to the people in London than to the Zeppelins above…the shells had so small a bursting charge that they could do no harm to a Zeppelin, and they returned to earth almost as intact as when they were put into the guns.

[…] General Galliene, who was in charge of the defence of Paris, had for the protection of his forty-nine square miles of city two hundred and fifteen guns, and was gradually increasing this number to three hundred. He had plenty of men trained in night flying, and well-lighted-up aerodromes. I had eight guns to defend our seven hundred square miles of the metropolitan area, no trained airmen, and no lighted-up aerodromes.

Citing “apathy, red-tapism,” and ministerial resistance from both the War and Navy offices, Scott sets out immediately to overcome his difficulties. He sends a competent assistant across the English Channel, circumventing his own government to obtain a vehicle-mounted antiaircraft platform. It is the model by which Britain will produce such weapons of their own, avoiding the problem of fixed defenses. Likewise, Scott manages to solve the fusing problem, which had bedeviled his predecessors for months, in a matter of hours, then skips the usual supply bureaucracy by purchasing his shells from an automobile manufacturer in France. Finding a rejected design application for a suitable bullet capable of setting hydrogen gas bags on fire, Scott puts it into mass production, equipping a specialized group of night-flying pilots to establish an effective air defense command by the time German air raids begin in earnest during 1916. The number of searchlights is doubled, and then doubled again. Scott works his contacts at every turn, coaxing Admiral John Jellicoe and Lord Herbert Kitchener into giving him guns for conversion to high-angle fire. In twos and fours and half-dozens, he collects 152 guns by late November, equipping them with shells that explode on their way back to earth to minimize civilian casualties.

Thoroughly competent, if controversial for profiting off his useful naval inventions, Scott is given a new assignment in the new year, and so does not preside over the successes of his former command. But his adroit and creative management of the competing military ministries raises new questions about the place of air power in the constitutional structures of the state. Both require aircraft to conduct modern warfare, yet there are vital strategic missions requiring independent advocacy. It is the dawn of the age of air forces as increasingly independent, whole military commands. 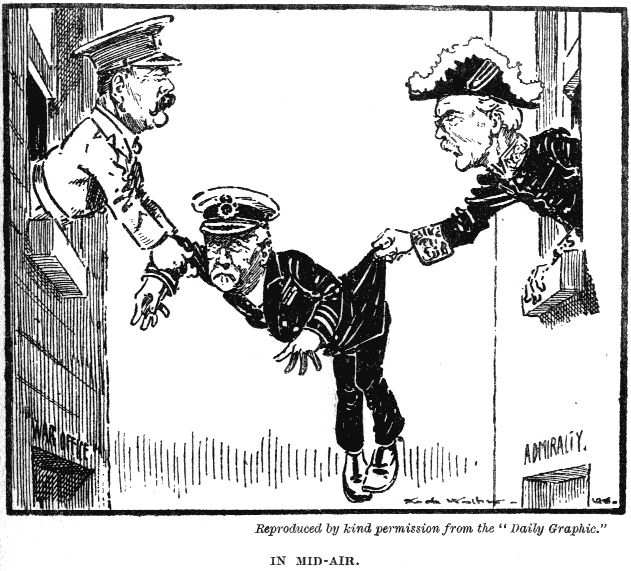