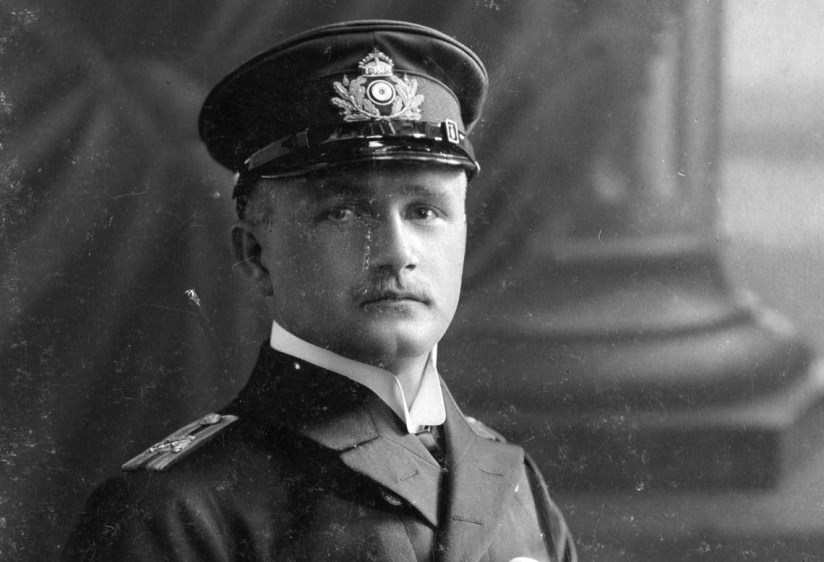 Seen above serving as an officer in the Imperial German Army, Wilhelm Wassmuss is easily one of the most important agents his country has ever fielded, and not all for good reasons. Only a career in the Foreign Office, including two stints at the consulate in the main Iranian port of Bushehr, prepared the studious Wasmuss before the Great War began; he has never had formal training as an operative, choosing to leave his diplomatic cover in order to take covert action in ostensibly-neutral Persia. Returning through southern Mesopotamia in secret during February, Wassmuss was briefly captured by British agents when he tried pamphleting a pair of border towns. But he managed to escape, leaving behind his money, equipment, and codebook. Despite the inauspicious start, Wassmuss has enjoyed good success in his plans to stir an uprising, for the land is rife with discontent.

Much diminished from its proud ancient glories, Persia has experienced slow modernization in the last century due to systemic corruption and abiding tribalism. Both banks in the country are British; Swedes dominate the gendarmerie; the treasury department is run by Belgians; the government is entirely dependent on foreign advisers and administrators, who even run its customs agency and control the resulting state revenues in a classic example of the imperial model. Having competed for influence in Southwest and Central Asia throughout the 19th Century, a process known as ‘The Great Game,’ the 1907 Anglo-Russian Convention set terms that both empires could live with, but which also left Persia divided into three zones: two foreign-controlled, and one dominated by foreigners. An election was held in 1913, but the Third Majles (legislature) only managed a quorum months after the Great War began, and has been hard-pressed to achieve meaningful reform in such a semi-autonomous state.

Such weakness is an intentional product of the ruleset agreed upon in the imperial game between Petrograd and London, and Wassmuss aims to take full advantage of the simmering resentment it creates. Acting on the personal approval of a German emperor who is still keen on expanding both the war and his influence in the Middle East, Wassmuss knows the weak point for both occupiers is their civilian component — specifically, the consuls in cities like Bushehr, where he first recruited Tangsir and Qashghâi tribesmen to attack the consulate beginning in July. The Shah’s army is small and dependent on Russian aid, and with the 7,000-man Persian gendarmerie dominated by pro-German Swedes, there is no native law enforcement or military force that can reliably provide security.

Britain has been forced to draw from its already-depleted imperial reserves to deal with the situation, occupying the port city and sending an ultimatum to the Persian government. Attacks have continued throughout August, with a punitive expedition launched in retaliation. Meanwhile, Wassmuss and his fellow German agents have spread the violence to Shiraz and Isfahan, both hotbeds of nationalist fervor. The situation is escalating fast now. 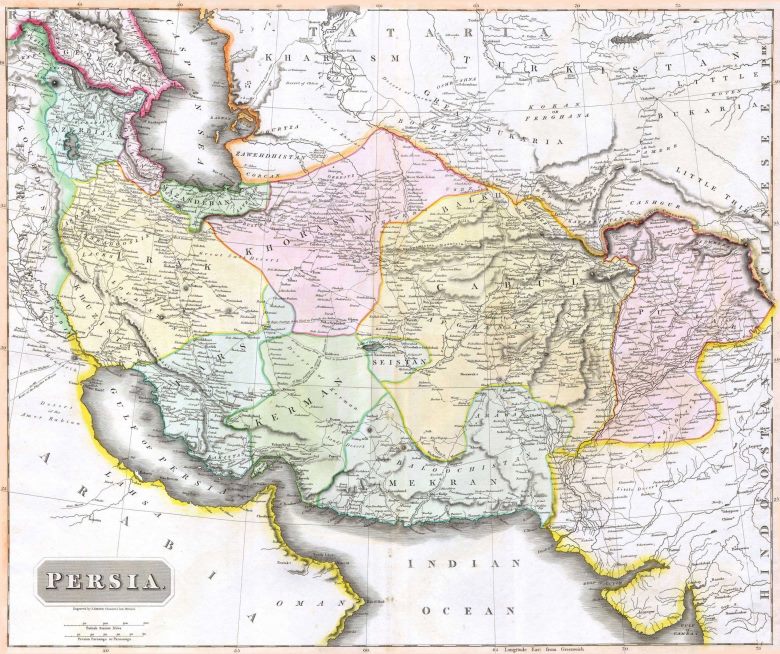 An empire lost: a map of Persia in 1814 includes much of Pakistan and virtually all of Afghanistan, all coveted by rival empires

Indeed, early this morning a Mr. T.G. Graham, the British Consul-General at Isfahan, is riding with his Indian bodyguard when a shooter opens fire, wounding His Majesty’s diplomatic representative but killing his armsman. The attack puts pressure on both the Russian and British ambassadors to demand that Tehran restore order or else risk their standing as a neutral state. Meeting with the Foreign Minister tomorrow to receive his regrets, Sir Charles Marling turns down an ensuing request for financial help by citing the security situation as a precondition for such aid. After the conversation, Marling dispatches a cable casting doubt on the prospects for British military success in Persia, at least outside of Bushehr. Allied inducements have failed to persuade Prime Minister Mostowfi ol-Mamalek to join the Entente alliance, and pro-German sympathies are widespread at all levels of society. Most worrying to Marling is the obvious faith that Persians seem to have in eventual German victory:

Unless some very drastic measure is taken or a decisive military success occurs to shake Persia’s belief in German invincibleness, we shall not be able to remain at Tehran very much longer, and it would at least be less damaging to our prestige to depart by our own doing than to be driven out.

Before the end of the month British and Russian consuls will depart by their own doing, with the Russian Army later returning in force as Marling suggests in his cable. Yet he meets bureaucratic resistance from George Curzon, the Viceroy of India, who procrastinates in vain hope of a breakthrough victory in the Dardanelles, and worries that an ultimatum would endanger British oil supplies; Marling replies that the situation is “not a question of drifting, but how long the Germans will hold their hands.” With the Shah increasingly surrounded by pro-German voices, Marling is justifiably worried.

Spreading the call to holy war, Wassmuss has been telling anyone who will listen that Kaiser Wilhelm II has converted to Islam and conducted the hajj to Mecca by way of the Berlin-to-Baghdad railway. According to another tale, while helping to arm and supply militants in his travels Wassmuss erects a fake wireless set, then deceives the locals into believing that he has received transmissions directly from the Kaiser, giving them warm religious greetings from Berlin. He is just one of many German agents: with rifles, ammunition, gab, and gold, a network of colleagues is fanning the flames of war from the Mesopotamian borderlands, across Kermanshah, through Afghanistan, and into the tribal regions of British India that will become Pakistan, where there has already been fighting on the frontier. In fact, Wassmuss accompanied Oskar Niedermayer and Werner von Hentig on their expedition to Kabul during August, where they hope to persuade the King of Afghanistan to join the Central powers. But Niedermayer and Hentig crossed the border on the 19th of August without him, for there was too much work to do in Persia.

Wassmuss ultimately fails in his mission, however. While there will eventually be an uprising, and even a provisional government set up far from Tehran, his call to jihad never truly materializes as a full-blown war across the full arc of the ancient Persian empire. Today, Army of India troops break up the remnants of a Bunerwal incursion on the Northwest Frontier. Unwilling to declare war on two empires that have him completely surrounded, the King of Afghanistan never commits himself to Niedermayer or Hentig. And because there is really very little that the Central Powers can actually do to sustain a Persian partner materially, neither the Shah nor the government of Persia will ever agree to any alliance. Within a year, the consuls — as well as the missionaries, commercial agents, and other civilians who left with them — will return.

The true depths of Wassmuss’s failure become apparent to only a select few at first. Found in his unopened luggage upon inspection in London, his codebook is exploited this month in Room 40 at Whitehall. Working to decode a year of wartime intercepts and eavesdrop on new ones, the Admiralty program sets a fateful collision in motion, for they will eventually use the lost ciphers to decrypt the Zimmerman Telegram, ushering the United States onto the world stage.

America will one day replace Britain as the primary balance to Russian power, and as the primary pursuer of oil interests in the region. But from the Persian perspective, the last two centuries have been a constant struggle against dependency on faraway powers for vital sovereign interests, including but surely not limited to military and security matters, and no matter which empire wishes to make them dependent. Like Wassmuss, today most Americans still confuse nationalist sentiment with crusading religious zeal. 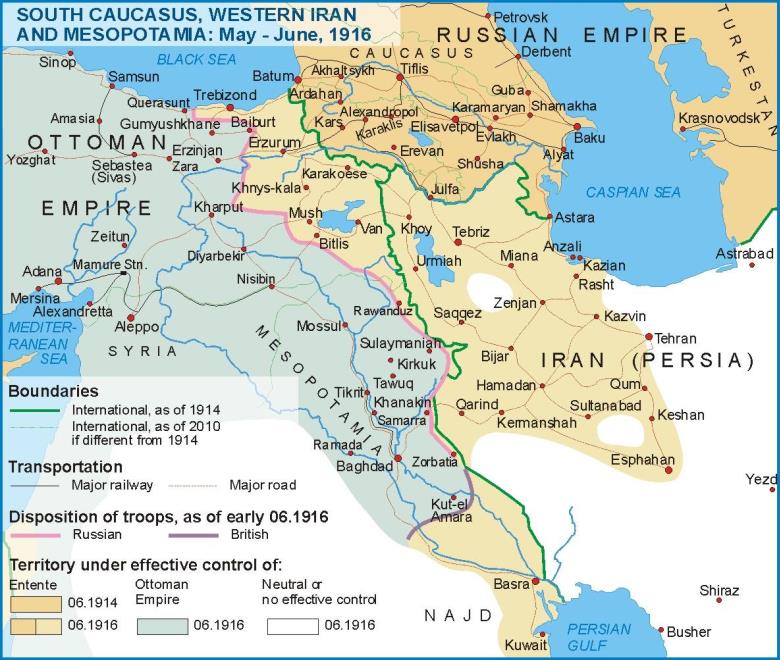 An axial extension of the war in Europe, a continuous conflict front is forming from the Persian Gulf to the Black Sea